CBS regularly organizes events in connection to art with cooperation partners, which are open to the broader public.

ARTIST TALK with Janne Klerk:
Reflections at the foot of the sky
(CBS, September 7th from 3-4.30) 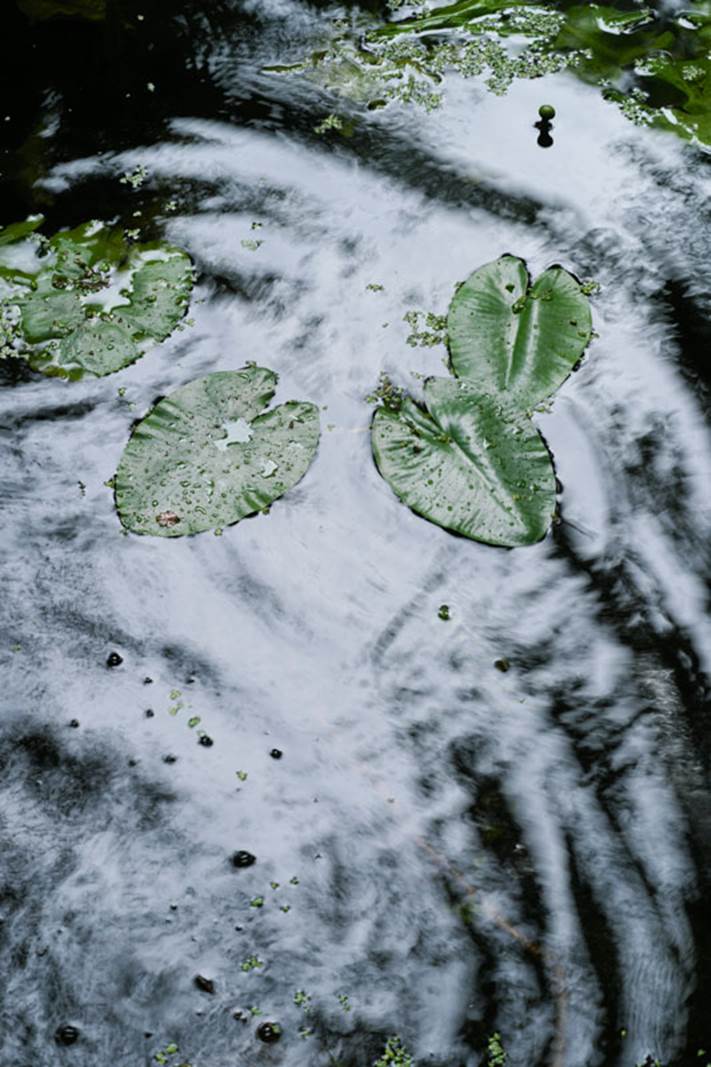 On Wednesday, September 7th at 3pm there will be an artist talk with Janne Klerk, who will talk about his work as a photographer, and about the thoughts and ideas behind the creation of the exhibition and the book of the same title.

From August 24 to September 19, you can experience the outdoor exhibition "Reflections at the foot of the sky" on the Rambla by Solbjerg Plads. The exhibition was created by photographer Janne Klerk, who is also behind the exhibition Denmark's coasts, which can be experienced in the Rotunda.

"Reflections at the foot of heaven" consists of photographs taken in one and the same lake in Denmark. Here, Janne Klerk has continued to work with considerations and inspiration about light, the many colors of nature, the sky and the forces of the sea.

The motifs that arose in the lake's water surface became more and more interesting during the photography and created a metaphor for the reflections that constantly take place between people and our surroundings. Reflections in perpetual motion, unpredictable and complex like the water mirror. The motifs took the form of all kinds of states, from gentleness, calm and peace to drama, turbulence and chaos.

During the photography, Janne Klerk began a collaboration with writer Gitte Broeng and astrophysicist Anja C. Andersen, who have contributed to the book with the same title, with texts about both measurable and non-measurable statements and considerations about the fascinating concept of reflections.

We hope that you would like to listen along, be inspired and participate in an exciting conversation about communication and reflections between people.

THE COASTS OF DENMARK by Janne Klerk

Invitation to the vernissage of Janne Klerk's photo exhibition “The Coasts of Denmark”.

We look forward to showcasing the beautiful landscape photographs that Lisbeth Bonde, art critic and author, has described as follows:

“Photographer Janne Klerk has created a visual heroic poem about the Danish coasts. She has photographed Denmark's vast shores, where the country stops and the wet element takes over. Sometimes this zone between land and water manifests itself abruptly as an amputated slope that has been torn apart by storms and raging waves, other times it is a mild beach meadow, which draws an imperceptible transition between land and sea, between green and blue. Thanks to Janne Klerk's gaze for the greatness and richness of variation of the coasts, we can now experience the sea and the coastal landscape in extenso.”

Read an interview with the artist by CBS WIRE here... 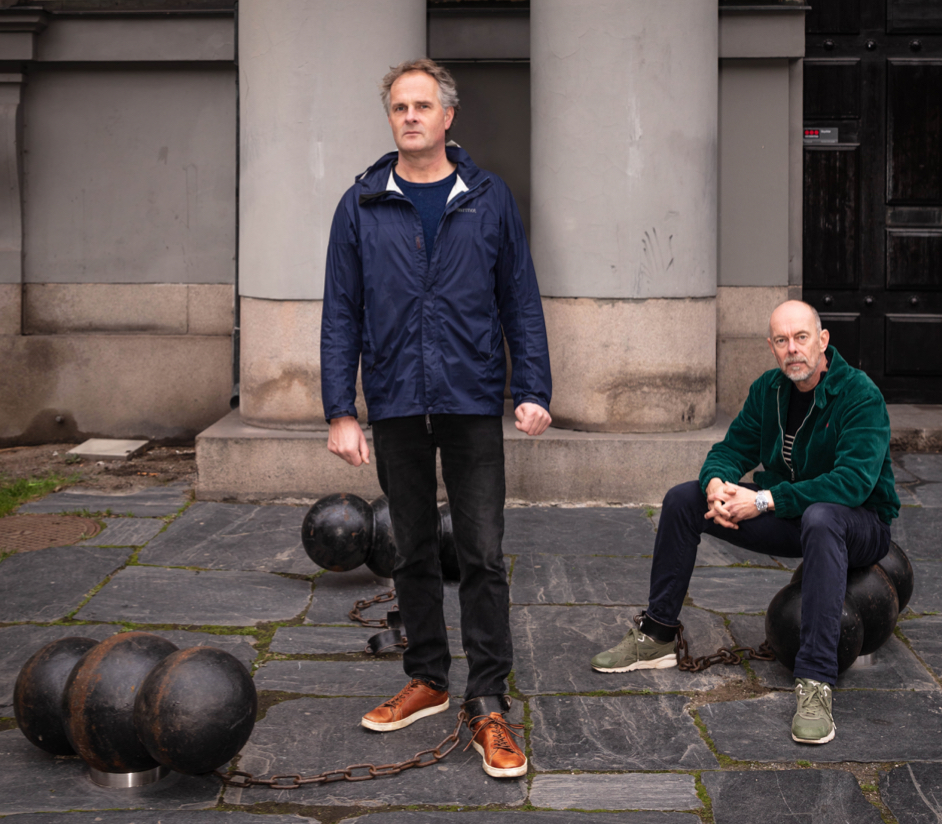 Six sculptures by the internationally renowned Swedish artist-duo, Bigert & Bergström, are installed outside of CBS’ main campus between the 1st of September and 15th of October. Each of the sculptures carry the heavy weight of 300 kg, which is the average CO2 emission of a Dane every two weeks. The CO2 Lock-In sculptures invite you to experience and explore themes of sustainability with your own body. What emotions and reflections emerge, as we become detained to the weight of our climate emissions?

The inauguration of the exhibition was held on Responsibility Day, which since 2009 has been arranged by CBS to engage new students in discussions about sustainability and social responsibility. The day marks the dispatch of the academic journey for thousands of aspiring businesswomen and men. Today, more than a decade later, the themes of Responsibility Day are more relevant than ever. You are invited to participate and engage with CO2 Lock-In’s, by locking yourself in to the sculptures, to provoke reflection on individual and collective responsibilities in the era of a climate crisis. 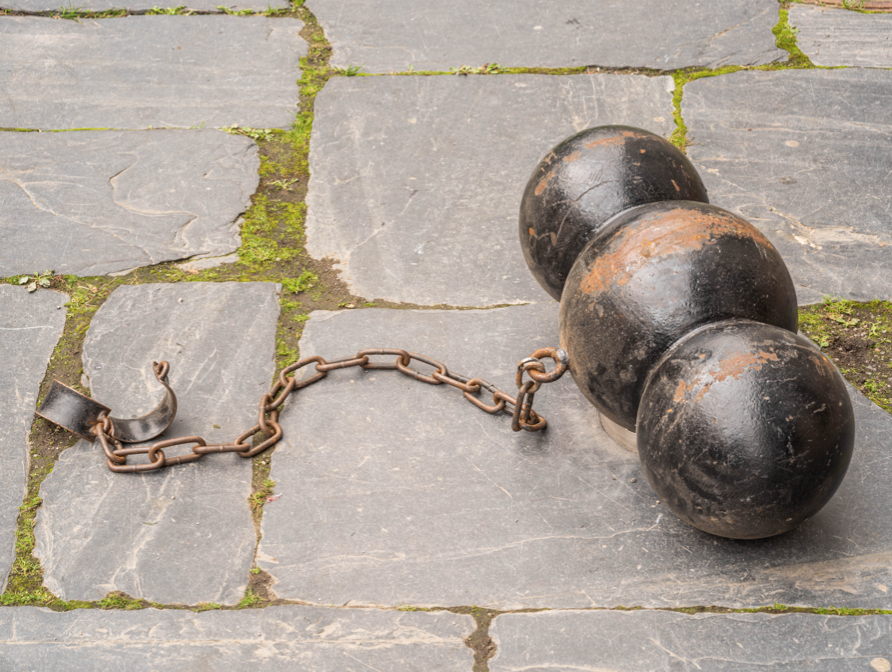 Bigert & Bergström’s sculptures, called CO2 Lock-In’s, consists of large foot shackles designed as carbon dioxide molecules. The sculptures are cast in recycled iron and weigh about 300 kg each - which corresponds to the average Danish person's carbon dioxide emissions for two weeks. The project was initiated for the 2012 worldwide climate action “Earth Hour” as a collaboration between Bigert & Bergström and the World Wildlife Federation (WWF). The ambition was to literally detain the public, encouraging a moment of slow reflection by creating a gap in the constant production and consumption of everyday life and forcing a dialogue around the difficult questions surrounding the climate crisis.

The CBS Council for Diversity and Inclusion, and the Romanian Presidency of the Council of the EU co-organize the photographic exhibition "European Diversity in Denmark". 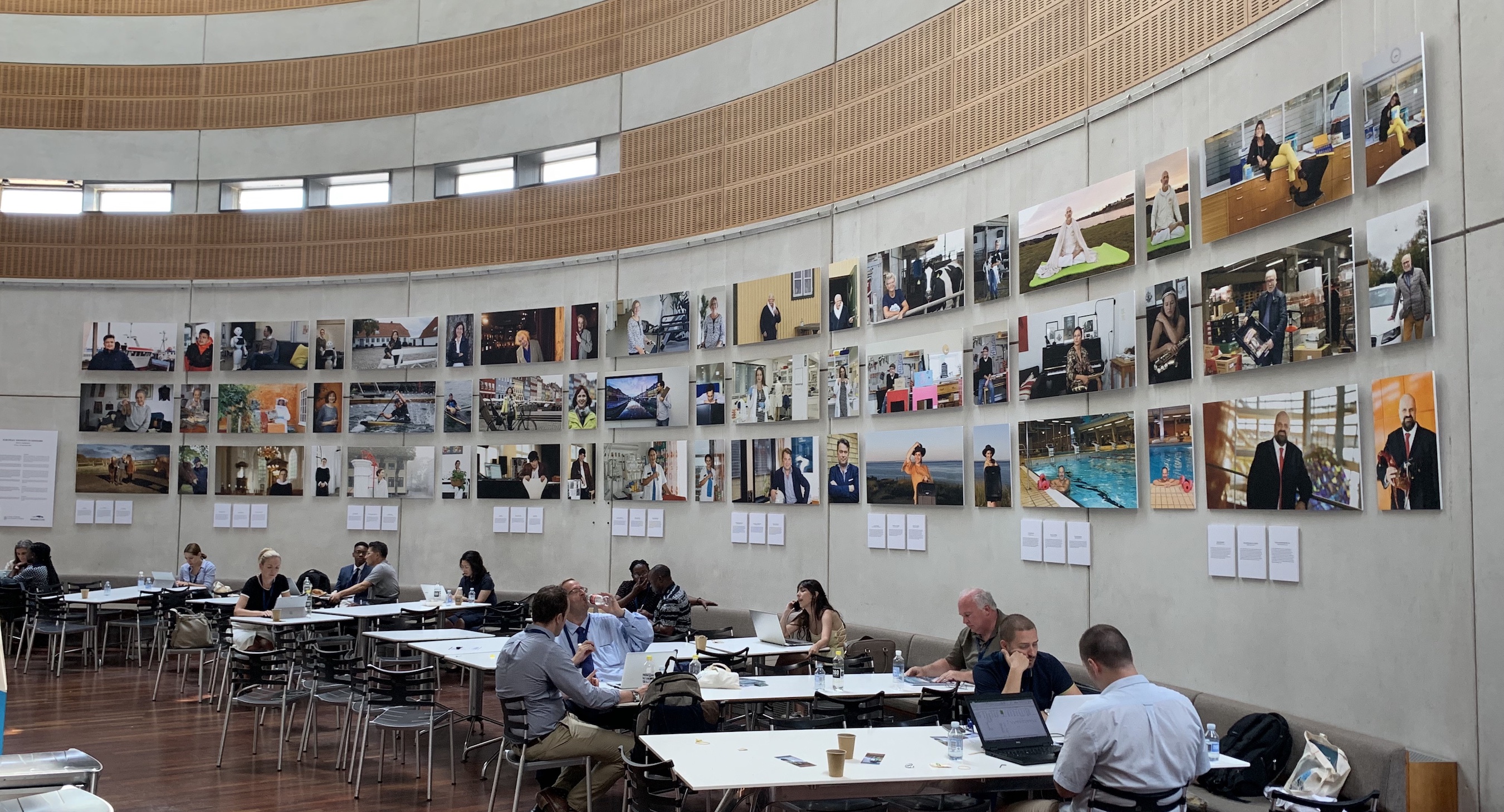 Diversity is one of the ground pillars of democratic societies and a core value of the European construction.

However, during the past two decades, a public debate against foreigners has been dominating the political discussions, focusing mainly on negative narratives.

This photographic exhibition opens up our eyes to the positive side of European citizens living in Denmark. Each of the 27 portraits correspond to a person born in another EU country.

Their fascinating life stories tell us about courage and integration. Tell us about their willingness to be an active part of Denmark and to make a positive contribution.

The exhibition is organized in cooperation with the Romanian EU presidency.

Susana Borrás' photography aims at triggering reflexive moments by opening up the unseen. In a hyper-mediatized world where prejudices and simplification are a constant threat to our independent thinking, her direct and colorful pictures want to make us think. She works as a professor at Copenhagen Business School.

The exhibition is open within CBS opening times and can been seen at CBS, Solbjerg Plads 3, Rotunden, 2000 Frederiksberg.

In cooperation with Stockholm School of Economics and Moderna Museet Malmö:

Cynthia Odier directs Geneva and Athens-based Flux Laboratory, which will present dance performance TransWarhol 3.0 at the Vernissage of the Warhol show where you will discover an entirely new side of the legendary Andy Warhol. Flux Laboratory supports the contemporary dance scene through experimental projects and productions bridging arts and business. How can contemporary dance and art energize entrepreneurial action?

From February, 28th CBS will show one of the ten short-listed videos of the Fokus video art festival at CBS' Digital Arts Screen (Solbjerg Plads 3, 2000 Frederiksberg). 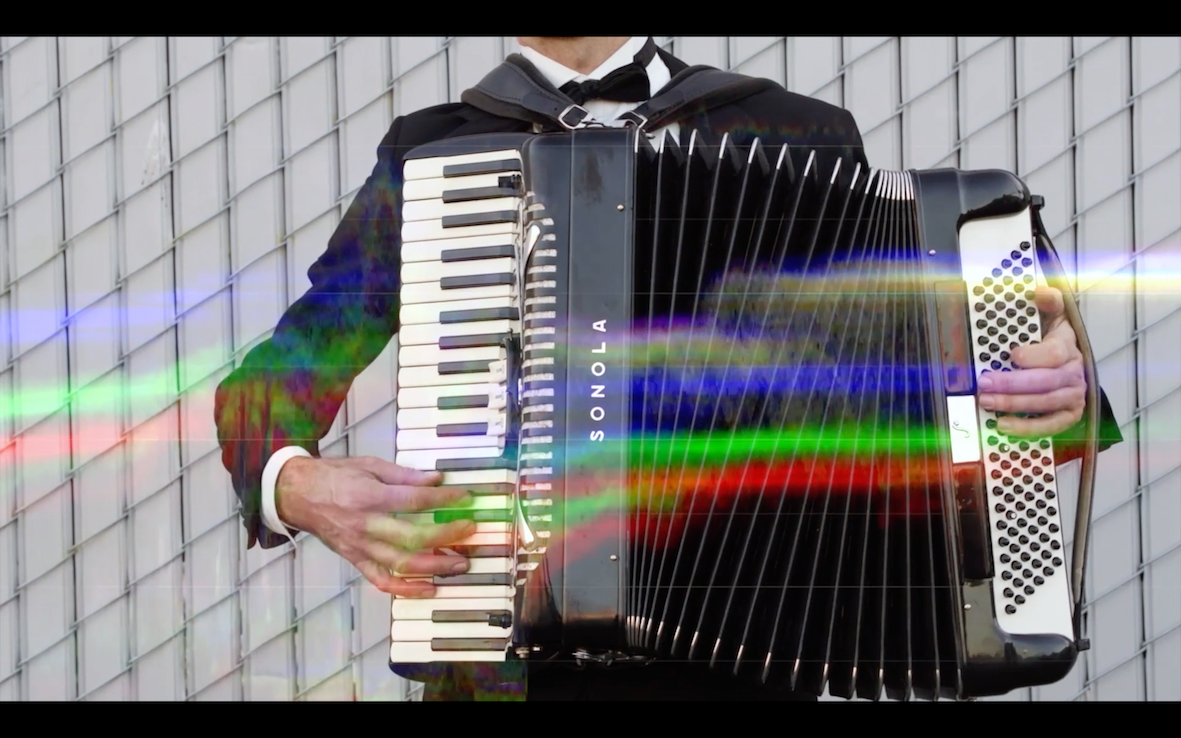 Mads Lynnerup: “Bird on a Shoulder”:

For most of us technology has become a natural and constant part of our everyday lives. With his video Bird on a Shoulder, Mads Lynnerup compares our dependency on technology with the dependency that pet parrots may feel towards their owners. In the film we see a drone moving freely through San Francisco, while a street musician plays colourful notes on his harmonica. Somewhere else in the city, a woman picks up books from the neighbourhood book exchange station. A woman talks about the territorial feelings of the parrot and how it bonds with its owner. The harmonic contrasts and metaphors of the film evoke the watchfulness, surveillance and dependency that technology has created.

You are welcome to pass by CBS’ Digital Arts Screen to watch the video.

More about the festival:

FOKUS video art festival is an annual international festival for video art hosted by Nikolaj Kunsthal from February 28 – March 31. This year it is the 9th edition of FOKUS video art festival. A jury of professionals from the worlds of visual art and film has selected the ten works. The 2019 jury consists of: Simon Starling, artist, Rasmus Brendstrup, programme editor at The Cinematheque, Helene Nyborg Bay, the artistic director at Nikolaj Kunsthal and Maja Krebs Sørensen, Production and event co-ordinator at Nikolaj Kunsthal. Shortlisted videos will compete for the FOKUS First Prize of €1000, The Jury Special Mention and The Audience Award of €500 each. The jury will announce the winners at the FOKUS Award Show the 28th of March, taking place at The Theatre Museum at The Court Theatre. The ten nominated works can be seen at Nikolaj Kunsthal and at various institutions within the Copenhagen Cultural District. The videos will be shown at: Thorvaldsens Museum, CBS, BLOX, The Theatre Museum at The Court Theatre, The Danish National Archives, The Danish War Museum, The Danish Jewish Museum and STORM20. 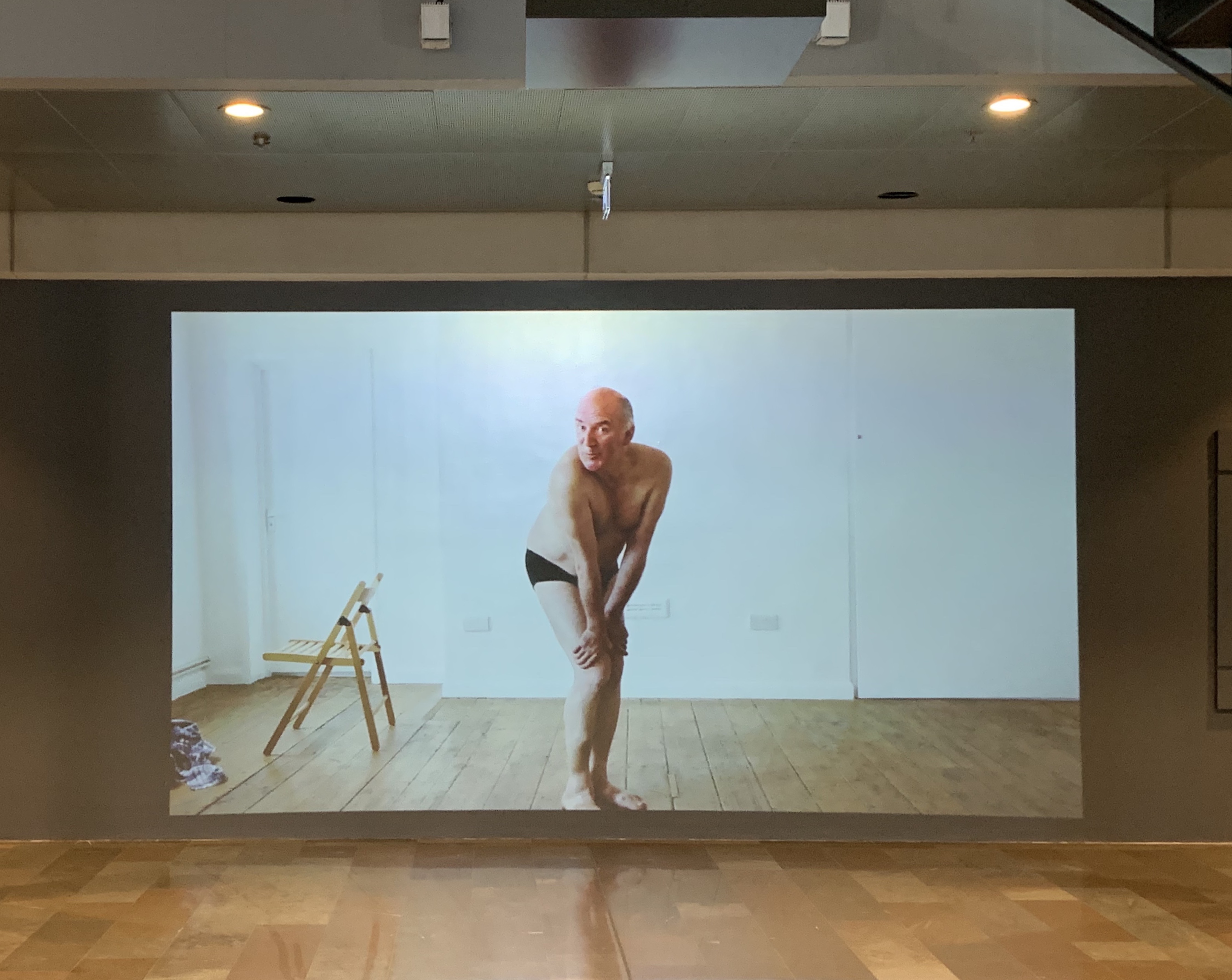 This is a unique chance to experience the artist talk about what went into this thought-provoking piece titled "Test Shooting".

About the video work:

With the #MeToo-movement and recent years focus on the interaction between the sexes, Maria Kapajeva's video "Test Shooting" is very relevant, as it tests the absurdities of the stereotypical presentation of female attractiveness.

We see an older man who partly undresses posed as a model at a photo shoot. He is asked to strike various poses according to the instructions given by the artist from her position behind the camera. These instructions have been found on websites where Russian women who are looking for a Weestern husband are told how best to present themselves.

Kapajeva's video has been recorded without prior rehearsal and is characterized by an unedited immediacy between director and model.

Maria Kapajeva is an Estonian artist, who lives and works in London. Last year, "Test Shooting" won the Runner Up Award at FOKUS Video Art Festival.

You can experience digital art at CBS when we in collaboration with DIAS Art Atelier host the exhibition Techtonic under Copenhagen Art Week from Tuesday 22 May to Sunday 27 May. Digital art will appear in new and unexpected places. 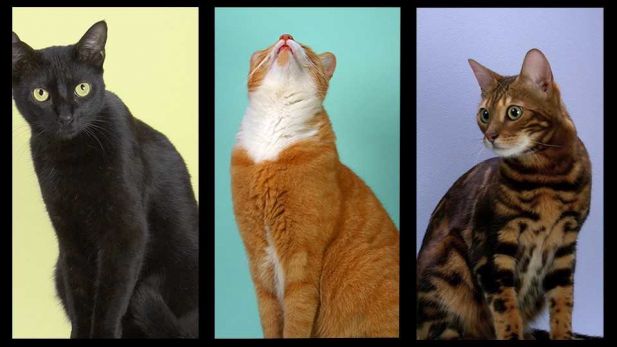 Bitcoin treasure hunt, a sculpture, video and audio art. CBS is involved in the art festival Copenhagen Art Week when the exhibition “TECHTONIC - changes and movements through technology “ is hold at Solbjerg Plads and the Wedge.

“We look forward to the cooperation with DIAS Art Atelier which brings art closer to CBS students, employees and other interested people”, says Philipp Alexander Ostrowicz from CBS’ art committee.

You can experience five digital works of art at CBS throughout the days.

WHAT HAPPENS AT SOLBJERG PLADS?

At Solbjerg Plads, you can experience an interactive audio artwork by the American artist Wayne Siegel. Your body will be used as an instrument in the artwork to create a unique audio universe.

In the canteen, you will be able to watch a video by the artist Matt Kenyon. The video reflects and comments on Coca Cola’s promotion of the soft drink as a positive choice.

You can also go on a Bitcoin treasure hunt by the artist Vibeke Bertelsen. Keep an eye on the picture clues, answer the riddle and find Bitcoins worth DKK 1000.

WHAT HAPPENS AT THE WEDGE?

The Bitcoin hunt continues at the Wedge but you can also stop to watch a video of the German artists Bianca Stich and Jan Brand. The artwork is based on our online culture characterised by the easily digestible - including cat videos. The artists ask whether the internet is democratic or pacifying.

The artist Jacob Remin participates with a sculpture. Remin focuses on the materiality of the digital and examines how the digital cloud works.

The exhibition is free and can be accessed during CBS’ opening hours.

Read more about the art exhibition at CBS

Read more about art at CBS

Tuesday the 6th of February at 3.30 pm in Ovnhallen, Porcelænshaven 20.

In December 2017, CBS purchased four pieces of artwork of the danish photographer Jan Grarup. The four images depict the world’s chaos and war, but at the same time they show a little sign of hope and the urge of man to survive in the midst of all the chaos.

Jan Grarup (DK, b.1968) has over the course of his twentyfive-year career photographed many of recent history’s defining human rights and conflict issues. Grarup’s work reflects his belief in photojournalism’s role as an instrument of witness and memory to incite change, and the necessity of telling the stories of people who are rendered powerless to tell their own.

As part of the exhibition About Work at Danske Grafikeres Hus the work will be installed in a new setting - the canteen at Copenhagen Business School - Rotunden, ground floor.

The artwork can be seen within CBS' opening hours at Solbjerg Plads. 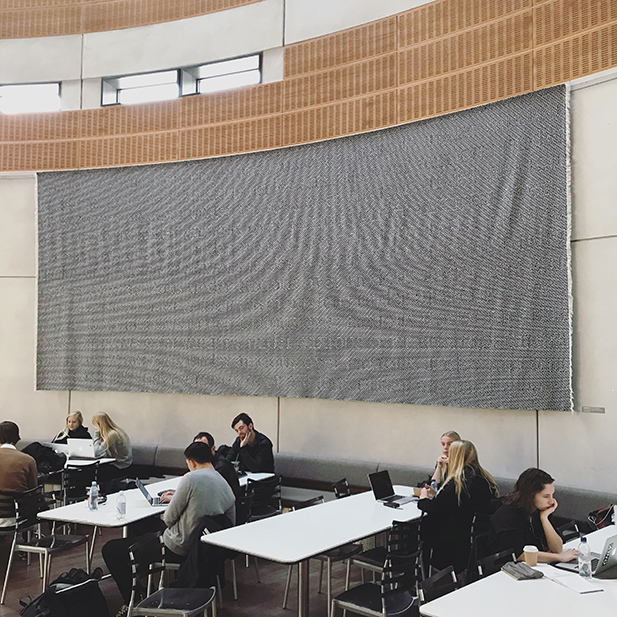