CBS Library is university library for Copenhagen Business School and is open to the public – every day of the week. 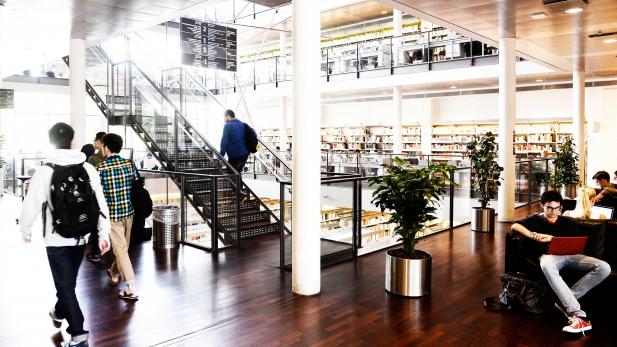 For better or worse, CBS has existed for more than 100 years.

CBS Library is a little younger turning 100 years in 2022, and yet it plays an important role in our common CBS story.

CBS Library is established alongside and together with a business school, which we have later on been fully integrated into. At the same time, we have always been an integral part of the Danish library collaboration.

The library's mission and raison d'être have been, and still are, to create access to information - originally only by means of printed catalogues and materials. As such, CBS Library is built on a foundation of an old but consistent principle of orderliness. Order on the shelves, order in the catalogue and orderly behaviour towards users and employees.

Our current DNA also consists of a clear position towards relevant service and innovation.  We have always focused on demand, new products and new service offers. We have always adjusted, re-aligned and made changes.

The biggest change has been the transition from printed to digital materials, but we are continuously making progress. We might be taking small steps on a daily basis, but this amounts to big steps over time.

We have willingly taken on new assignments; previously in terms of sensible growth but since then primarily by removing older assignments or by focusing, calibrating and working effectively. This means that we have been able to deal with tasks such as research support, communication, teaching and physical facilities including new study environments.

Today, CBS and society perceive us as a well-operated and relevant unit.  However, there is always room for improvement.

In a resource scarce and competitive situation with focus on administrative value creation, we share the responsibility to become even better at leading, communicating, managing and taking action. And not least performing, providing service and taking individual responsibility for our own area and context.

Our culture is characterised by solidarity, experience and a job satisfaction above average. At the same time, we are also characterised by deeply rooted habits and specialisation which brings with it the risk of acquiring a silo mentality. Not only internally in the library but also in our relationships with other units at and outside CBS.

In addition to orderliness, service, efficiency and relevance, CBS Library must also adhere to a number of other values. The foundation is always based on professionalism. Professional and personal qualities are not in contrast to but instead prerequisites for each other. Other core values which deserve increased focus and recognition are respect, trust, diligence and courage.

CBS Library's existing strategy has been successful, and an internal strategy procedure (2016) has not revealed a significant need for major changes of work and focus areas.

The strategy should therefore only be adjusted according to CBS' "Transformational Initiatives" and the primary results of the strategy procedure. The latter calls for possible improvements with regard to culture, performance and collaboration as well as a special focus on the library room as a driving force for continued development of the relevance and deliveries of the library.

The strategy, which is published externally, appears as a revised version of the 2012 strategy:

Mission
The primary task of CBS Library is to make information, knowledge and services available in a structured and manageable way. We are an integral part of CBS and attend to tasks regarding information, learning and dissemination for CBS' students, researchers and lecturers.
In addition to this, we are a public library and make information, services and study facilities available to others than CBS.

Focus
CBS Library adheres to the highest quality in its work.  We ensure quality by focusing on the development of our culture, performances and interplay.
We create the best possible value for stakeholders and users. We support value creation by working continuously to streamline our processes, optimise our use of resources and evaluate our services.

Continued efforts (2012-)
I.    CBS Library must develop and improve the users' access to local, national and global e-archives and e-resources.
II.    We must ensure the information competency at CBS by guiding and teaching students, lecturers and researchers to navigate in a knowledge-intense world.
III.    We must increase the knowledge of CBS' research by registering, analysing and disseminating the published research.

New target areas
IV.    CBS Library must support CBS' strategic focus on entrepreneurship and innovation, development of the programme portfolio and the collaboration with the business community/society.
V.    We must maintain the library room and use it as an innovative focal point for the development of the deliveries provided by the library and its continued relevance.

Ambition
CBS Library has an ambition of advancing the company significantly in the following three areas:

VIII.    Interaction with a changing society

All invoices to CBS Library should be sent electronically.

EAN number::
5798009814821 - Please add e-mail address as reference for invoice recipient and name of the requisitioner.