Video: Cyberwar in Ukraine and critical infrastructure protection: what NIS2 will mean for you 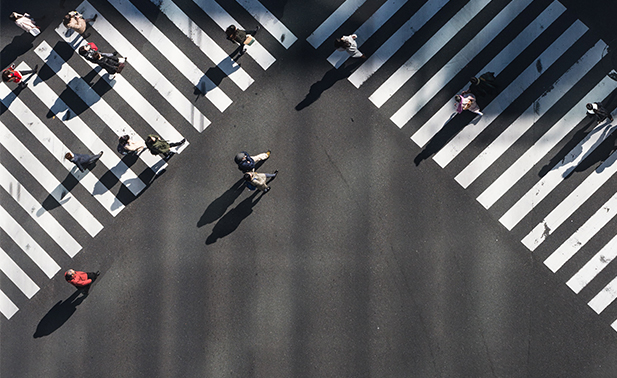 “Changes are standard in all organizations. But it is also standard that people spend a lot more time thinking up new reforms, strategies and visions than on implementing them. And that is a massive management problem.”

As Associate Professor at the Department of Organization at CBS, Susanne Boch Waldorff states. In her research, she has uncovered recurring challenges in management. But she also has suggestions for what management should be aware of.

These are Waldorff’s four, research-based pieces of advice for leaders who have to roll out a new strategy or implement other big changes within their organization – and who wish to make sure the targets are reached.

STRUCTURES MUST BE CHALLENGED

Susanne Boch Waldorff’s research across sectors, including the police, healthcare and social services, show that generally speaking, leaders are focused on staging new initiatives, while forgetting that there is already an organization in place, which is considered meaningful. Routines, practices and roles are weaved into one other and everybody contributes to the solving of assignments.

“Often, it is difficult to change an existing practice, because it is connected to other practices. And often, you will see leaders instigating changes in one area of the organization – without even considering these links. Wanting to change one specific practice is fine. But, then, securing the connection to the surrounding systems becomes pivotal,” she says.

Waldorff emphasizes that firstly, leaders must be aware of whether it is even possible to implement the desired changes in the already existing basic structures within the organization.

“Will employee competences, procedures, incitement structures and IT systems support the changes you wish to implement? If this is not the case, you must challenge these structures. It can be a huge task, but there is no way around it.”

As an example, she mentions healthcare, where they aim to improve the quality for patients by creating more consistent treatment processes. This, however, is countered by the status quo: for example, that the various professions function as specialists within their own fields. And that the existing financial management system is based on a performance model where the goal is handling as many patients as possible. So, if the healthcare system wants to fulfil its aim, they will have to challenge these structures to a greater degree, Waldorff explains. 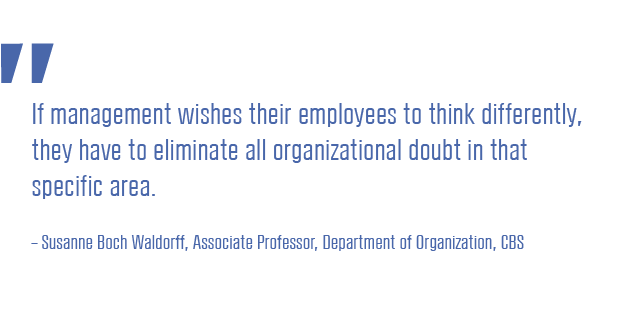 Many leaders have found themselves in a situation where they have implemented new ideas only to discover that the old routines continue wholly or in part. Within the healthcare system, they decided on a trial period where they replaced the existing fees system, which rewards a high level of activity, with a new model that would focus on that which the patients consider valuable.

“However, in one hospital management were unsure of wether or not it was indeed wise to entirely dismiss the old system, and so, concurrently, they upheld the old practice of sending out performance evaluations to the wards. This meant that the organization continued along its old tracks, focusing on the number of procedures,” Waldorff says.

And Susanne Boch Waldorff calls attention to another example: The Danish Council of Ethics wished to work in a new way, where they were not solely dependent on experts, but they also wanted to involve users and practitioners in the work with uncovering ethical problems related to the use of force within psychiatry. Along the way, those responsible in the Council of Ethics expressed concern that their expert status risked being harmed by this new approach. And in the end, they chose to primarily invite the traditional experts.

“The learning here is that if management wishes their employees to think differently, they have to eliminate all organizational doubt in that specific area. Management must reflect on their own approach and remove that which opposes the new, so that everyone understands that they are serious.”

SKILLS MUST BE AVAILABLE

As mentioned, it is also critical that the organization contains the proper skills. It is not enough to tell employees to do their best. Most of them already do.

“Among other things, you have to provide training and technical systems to sustain new initiatives. And you have to support the new ways of working and signal that the new skills are important for the organization,” Waldorff says.

This was where it was challenging for the police when they implemented a new strategy, which concerned gathering large scale crime data in order to analyze which actions would have the greatest effect. They hired a new group of employees with analytical skills, but according to Waldorff, the analysts were given difficult working conditions. Both because the internal IT system was ill-suited to the purpose, but also because the newly hired analysts were not given sufficient elbow room to actually employ their skills.

In municipalities, she has also seen numerous examples of how, for instance, the lack of skill development can hinder the realization of the management’s visions. Among other things, this concerns a common wish to increase the dialogue with citizens. The problem here is that this dialogue must be handled by officials who are typically highly skilled experts and caseworkers in a specific area, but most of them are not sufficiently equipped for a more process facilitating role.

“Which is why there is a risk that the new strategy will fall flat, and this emphasizes that further training is essential if they want an increased dialogue with citizens to be practically possible and with the desired effects.”

DO NOT FORGET THE HUMAN FACTOR

Susanne Boch Waldorff also points to the importance of sustaining the individual employee’s well-being and engagement, when management implement big changes that shift responsibilities and power structures. Management must understand that new assignments and structures can be difficult to navigate. Not only do you risk losing power and responsibility, you also risk losing yourself.

“It is important to remember that management never has full knowledge about the organization. And, as it is the employees who will be driving most of the changes, the organization’s top level must not merely dictate, they also have to ensure that the employees define their own new assignments,” she says, before continuing:

“In the police force, quite a few employees had a hard time accepting that analysts would now be providing the knowledge that they themselves had hitherto provided. This created internal tensions, because the police officers could not see themselves within this new context. The key to success in such instances is creating peace of mind and meaning by including the employees in important decisions. And thus, you show them that the management understands and acknowledges the challenges,” she concludes.

And you can visit her CBS webpage here