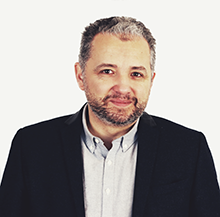 Cornel Ban is an associate professor of International Political economy at Copenhagen Business School. Prior to this he was a Reader at City University of London, assistant professor at Boston University and research fellow at Brown University in the United States. He wrote two books and two dozen articles and book chapters on the politics of economic expertise, policy shifts in international financial institutions and the politics of capitalist diversity in Brazil, Spain, Hungary and Romania.

Currently, Cornel works on growth regimes, the role of state and finance in decarbonization and the political economy of industrial policy.

Link to this homepage
www.cbs.dk/en/staff/cbaioa
Courses

Ban, Cornel, and Bryan Patenaude. "The professional politics of the austerity debate: A comparative field analysis of the European Central Bank and the International Monetary Fund." Public administration 97.3 (2019): 530-545.

Moments of trauma can be moments of opportunity

Letter: What gas traders do is fine in peacetime, not in war