During the centennial, we look back at the 100 years that have passed since the foundation of CBS Library. We have reached the 1950s.

The library has always offered generous opening hours, and the 1950s were no exception. The library was open Mondays through Fridays 10-21 and Saturdays 10-18.

The collection evolved during the 1950s and climbed from nearly 25.000 volumes to nearly 35.000 in that decade only. Lending rates also increased whereas reading room usage dropped. 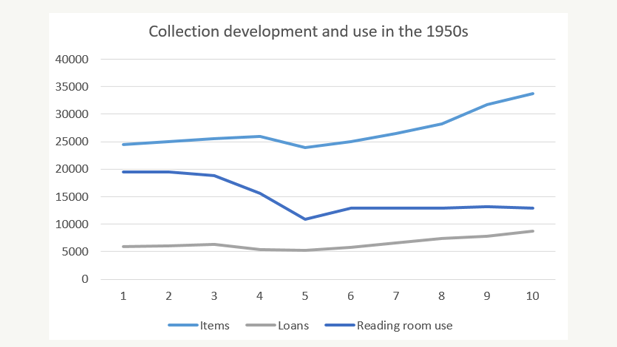 A short-lived decline in the collections in 1953-54 was due to an extensive overhaul and reorganization of library collections. This initiative was primarily a result of head librarian Knud Larsen, who was a member of a committee in the Department of Statistics, having to rethink principles around library statistics. The count and survey revealed that collections spread across 722 metres of shelves and comprised 23.865 volumes. Many of the old books from the C. Hage collection that was incorporated in the 1930s were moved to storage, as they were no longer relevant. As the decade came to a close, the collection swelled when the former Ibero-American Institute closed and its collections were transferred to the Handelshøjskolens Bibliotek.

Per Boesen, a librarian who went on to become head librarian, was a member of a committee of Copenhagen-based libraries, that wanted to "rationalize and coordinate the foreign journal collection", as an annual report describes it. Throughout the 1950s, Boesen became increasingly active in the library community and worked as a consultant at the Danish Bibliographic Office, which was responsible for the cataloguing principles in Denmark.

Library costs in the late 1950s

Copenhagen Business School key financials published in the 1958/59 annual report reveal that the cost of the library stood at DKK 94.758. Converted into present prices, that amounts to close to DKK 1.34 million. The library "annuum", most likely the equivalent of what is today known as the acquisitions account, was DKK 20.000 (DKK 284.322 in present-day prices). At the time, 1145 of the 2500 students were registered patrons with the library.

A lot of library materials were acquired via a bartering system with more than 60 institutions both at home and abroad. Copenhagen Business School published Erhvervsøkonomisk Tidsskrift [Journal of Business Economics] and Det Danske Marked [The Danish Market], both of which were given in exchange for other materials.

Over time, a huge collection of annual reports from Danish organizations and companies accumulated. However, as Lotte R. Thomsen, a librarian with CBS Library of the past 25 years and responsible for the journal collection, explains, “All the old annual reports have unfortunately been discarded many years ago. Between increased access to digital resources such as CD-direct (now Navne og Numre Erhverv), company websites, and overcrowded shelves, the collection died out. "But it was indeed a very extensive collection", she continues, "We had almost everything… Arla, Dyrup, Amagerbanken, Deloitte, Danfoss, Falch, Ecco, TDC, SAS, Oticon, and many more".

Between increased access to digital resources, company websites, and overcrowded shelves, the collection died out 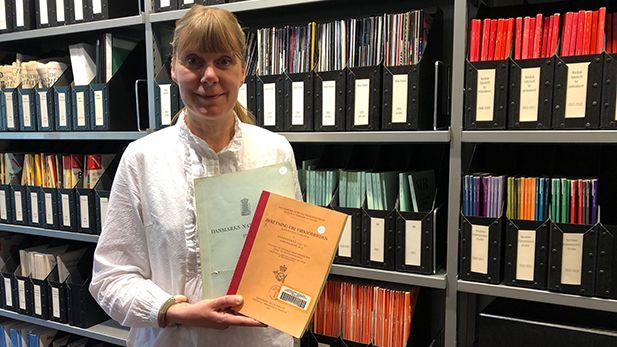 If today you wish to explore old annual reports, you need to visit the Royal Library. At CBS Library, only a few print annual reports remain, and only from large organizations. Look up ‘annual report’ or ‘report’ in Libsearch - Find journals.

The year 1954 saw the introduction of media research as a separate research area at CBS, and with it a media library was created in the context of CBS Library. This new research area was organized around the Department of Sales Organization and Advertising and was to focus on "scientific studies of the societal activity of the media". Topics explored under this heading included the capital structure of the daily press, building an Ad Index, and sales of weekly magazines in Denmark. Much of the research was published in the journal Det Danske Marked [The Danish Market], which can be ordered from the CBS Library stacks.

Per Boesen was active not only as a librarian but also as a lecturer. Among other things, he wrote articles for journal Det Danske Marked [The Danish Market], which was published by Max Kjær-Hansen, head of the Department of Sales Organization and Advertising.

In 1950, Per Boesen published The Danish book distribution's rationalization problems and A little about a company's formal and informal organization.  They contain articles from a parade of CBS lecturers, including Bjarke Fog's Can a company find its sales curve?, Arne Rasmussen's Shopping habits and consumption habits in Denmark, and Jan Kobbernagel's Competition as a legal concept, all employed with Copenhagen Business School and all went on to become full professors - the latter even president in 1963. Many articles are available online in Handelsvidenskabeligt Tidskrift, Erhvervsøkonomisk Tidsskrift, and Nationaløkonomisk Tidsskrift. 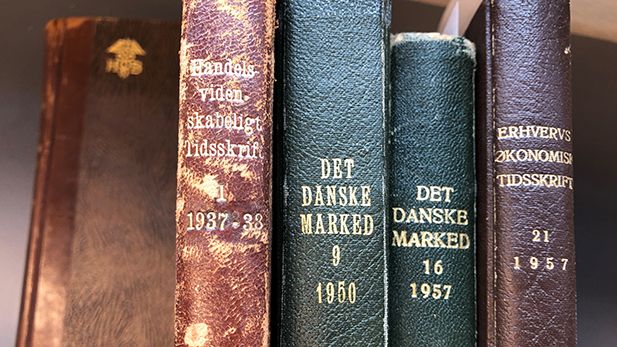 If you were a diploma student of sales organization and advertising, you could revisit your exam questions in Det Danske Market. Every single student gets a mentioning by name alongside the main assignment that he or she had to complete in the course of four weeks.

In 1955, CBS appointed the first professor of language, Poul Høybye. If you have ever immersed yourself in French, there is a chance that at some point you have come across the outstanding French-Danish dictionary that he co-authored with Andreas Blinkenberg in the early 1960s. The dictionary was very popular with students when we still maintained a language library in Dalgas Have, and you can still find it in the Solbjerg Plads library.

You will find a lot of the old print materials (end of May) in a mini-exhibition in the Solbjerg Plads library on the occasion of the library´s 100th anniversary. 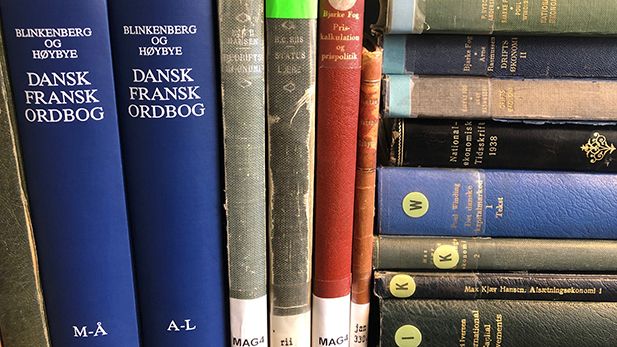 The following resources were used for this article

Take a look at the CBS Library Anniversary Talks programme