During the centennial, we look back at the 100 years that have passed since the foundation of CBS Library. We have reached the 1980s. This is the decade when IT development gains momentum and new services are developed.

Hot topics in the 1980s include strategy and planning, service improvements to make it easier to use the library, and new IT solutions for discovery purposes.

The role of the library vis-à-vis the business school and the wider world is clearly defined in the annual reports from the decade: 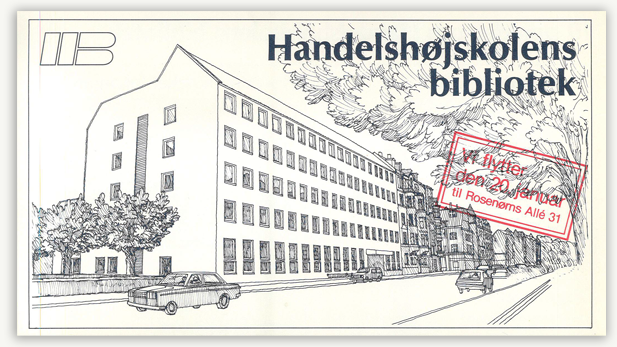 Photograph from a leaflet about CBS Library

New shelving principles and a hike in loans

New shelving principles are introduced at this time to make it easier for patrons to navigate the collections. The previous location marks, devised by Knud Larsen in the 1930s, are converted into UDK, which is the Danish version of UDC - Universal Decimal Classification – that was invented at the close of the 19th century.

Beginning in October 1981, all new books in the Language Library are shelved according to the UDK classification principles, and in July 1982, the Economics Library follows suit. In fact, the library is forced to close for four weeks, as the entire book collection needs to move.

From 1981, books from the Language Library, which until this time had been for on-site use only, can now be checked out too. 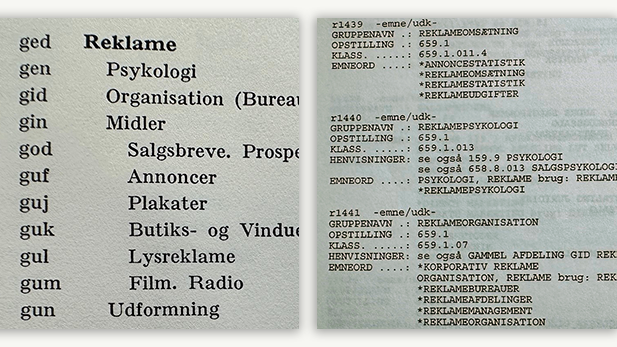 The final decade of the paper catalogue

If a user wants to find anything in the library at this point, they need to look it up in the catalogue, which is a series of printouts based on information stored in a punch-card data processor. The catalogue took up a lot of space!

The catalogue is the key to the library collection

One great disadvantage of the paper-based solution lies in the fact that to find relevant books and articles, one needs to look in a lot of different places. As a way of mitigation, alphabetical as well as subject-based lists of books are produced. Close to five thousand keywords can now help users identify books on a specific topic. The catalogue is also available on microfiche for people who prefer flipping through tiny index cards made of plastic instead of handling large printouts.

With the navigation of the library collections vastly improved, better usage of the collections follows.  The catalogue is also available as card indexes, one alphabetically sorted by author, and another by topic. The time for paper-based catalogues, however, is drawing to a close. 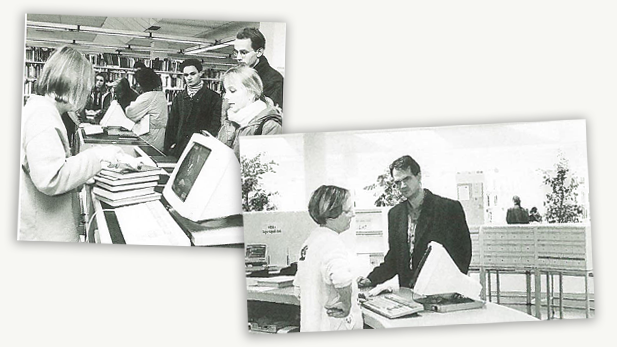 Photos from Rosenørns Allé (left) and Dalgas Have. Please note the card index cabinets in the background.

Beginning in 1965, the library continuously and systematically recorded information about the books held in the collections. These machine-readable records can now be used to build a database for online discovery.

In the fall of 1983, an experiment is undertaken to examine how users interact with an online discovery system and to establish how reliable the system is. The test database contains around 50.000 book entries and covers the years 1965-82. Unlike paper-based lists and index cards, the online discovery system allows for alternative search strategies, and the idea to make searching available outside the confines of the library space (e.g. in departments) takes hold.

The users are very excited about the prospects, and from comments left in a survey undertaken at the time, it is clear that they prefer an IT-supported solution: ”I hate those [paper-based] catalogues, it is so time-consuming”, ”[I prefer] the IT system because it is quick and because I am now at last able to find something in this library”.

The results of the test help drive decisions on the future focus of the library and at the end of the decade, the strategic targets are changed.

The second half of 1988 sees the introduction of a new IT system. From just a few terminals with modem link-up, the library now invests in an in-house server park and a local network. This development requires new skills and adaptability, and to meet these new requirements, a system administration (IT department) is born.

The new IT system is dubbed Hermes, the god of commerce and merchants in Roman mythology. In this way, the library taps right into the DNA of CBS – so a befitting name indeed. 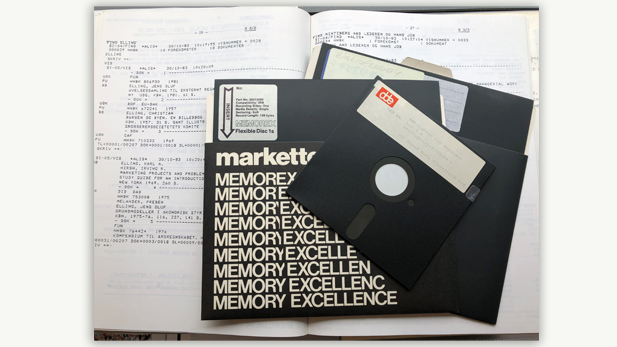 Dansk Data Elektronik (DDE) is a new company and the company behind the first online discovery system at CBS. Their business model is such that if a library wants to use their software solution, they can only do so via the hardware mini processor SUPERMAX.

Because of this model, CBS Library is highly involved in the enhancement of the system. Former staff recount how in the early days they had to travel to Northern Jutland whenever something needed developing or testing. They all agree that this was indeed an exciting period for the library and its staff, as everything was new and untested.

On top of improving the search capabilities in the library´s own collections, towards the end of the decade work is ongoing to maximize the usage of relevant external resources. In fact, externally sourced resources are high on the agenda, even higher than the in-house ditto. To support this prioritization, the library invests a lot in the upgrading of online services and doubles down efforts around industry and business economics.

The changes in strategy are not necessarily only down to the changing IT landscape, the library also has a new head librarian and the organization itself undergoes changes too.

In 1985, Michael Cotta-Schønberg takes over as head librarian, a job he holds until 2006. The organization changes, and a brand new management team, including head librarian, deputy head librarian, budget control manager, and management secretariat, is in place. The departments continue to be self-governing and the library advisory board remains the connecting link to the university.

The winds of change have taken hold

In a 1987 speech delivered to research libraries, head librarian Michael Cotta-Schønberg tells the audience that “the winds of change have taken hold”. The changes that he alludes to are closely connected to technological innovations, and as a university library, it is important to stay tuned in and adapt to the new needs and conditions, and not bury one´s head in the sand and hope that it will all pass. The libraries cannot allow the fear of becoming irrelevant, because everybody can now go online to conduct their searching, to overshadow the huge potentials that accompany progress.

A part of the strategic prioritization is the development of online services. The new head librarian is foresighted and is of the opinion that it is critical to keep up with progress, to stay on top of new information technologies, and to stay close to the research community.

Documentation service for researchers and the business community

1987 sees the first of a series of new focus areas with the launch of a new economic documentation service targeting researchers and the wider business community. The service comprises:

As a start, the focus is on traditional online retrieval, but this will soon be followed by analysis and processing services.

From the get-go, the documentation service uses the CD-ROM medium, which is just out. The library acquires the necessary hardware to run the CD-ROMs (Hitachi-Drive and 1 IBM PC) and takes out a subscription for Business Periodicals Index (BPI), which contains references to 40-50% of the library´s journals, and Public Affairs Quarterly (PALS). Both are available in print and are among the most popular journals at the time. The introduction of CD-ROMs helps reduce costs significantly compared to searching the online versions, as the CD-ROMs are free to use. Only the article references are available for searching. Finding out whether the article itself is on offer from CBS Library requires a separate effort. Only later will the full-text documents find their way into the databases.

An increased focus on industries and companies

Data on industries and companies become increasingly important as many of the research and teaching activities at CBS tend to focus on these very topics. It is therefore essential for the library to provide extensive and easy access to content in these areas.

The Economist Intelligence Unit is signed on to supply all of their publications, including The Economist and a whole slew of special reports on topics in the field of business economics.

In the 1980s, CBS Library assumes the role of World Bank deposit library, which means that the library receives books, reports, and journals, roughly 330 per year, for incorporation in the collections. We continue to offer access to World Bank publications to this day, now via the database World Bank Data. The same is true for the Economist Intelligence Unit that is behind the EIU Viewpoint database.

Moreover, in the 1980s, CBS theses are made available from the Language Library. These theses often deal with the Danish business landscape, which more often than not eludes the published literature, and for that reason they are very popular.

At the Language Library, focus is now broadly oriented towards societal and cultural themes as well as on the procurement of fiction in the languages that are being taught at CBS. The core areas are terminology, lexicology, technical language, and data linguistics. The Christopher Hage collection, which he donated to the library in 1930 and which for many years found itself put out of the way in the attic at Julius Thomsens Plads, are taken out of storage and finds a new home, predominantly in the Language Library.

New library spaces at Rosenørns Allé and in Dalgas Have

The Economics Library relocates to Rosenørns Allé 31 in 1985. Today the premise houses a Rema1000 supermarket. The new library is made up of 750 m2 of public space on the ground floor and 550 m2 of basement, which houses the book and journal collections. The first and second floors are office space for library staff, of which there are 35 at this point. With the extra space, annual reports now find their way to the open shelves alongside the journal collection, and the newest editions of journals are put on display.

The library is furnished with great care and taste, and boasts among other things Børge Mogensen sofas and armchairs that are still in use in our lounge area to this day. This purchase was made possible through a gift of DKK 1.7 million from FUHU (The Danish Society for the Advancement of Business Education).

In 1998, the Language Library moves to Dalgas Have, which is the new home of the language programmes at CBS. The new library is bright and very different with its curves and skylights. The building is designed by Henning Larsen Architects with the aim of creating a space that interacts with the shifting light in Denmark. 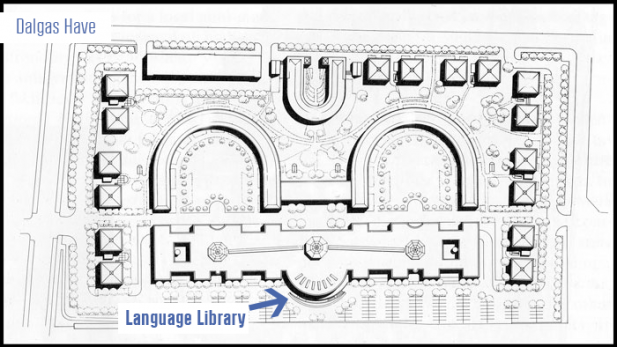 Plan of Dalgas Have from Arkitekturbilleder.dk

The following resources were used to write this article

Join our series of talks on 100 years of CBS research