Lending explodes, we travel the world and bring back new ideas, the virtual library and library service evaluations are gaining ground. These are all characteristics of a decade that also sees the opening of the current library at Solbjerg Plads. During the centennial, we look back at the 100 years that have passed since the foundation of CBS Library. We have reached the 1990s, the decade that gave us the Internet. 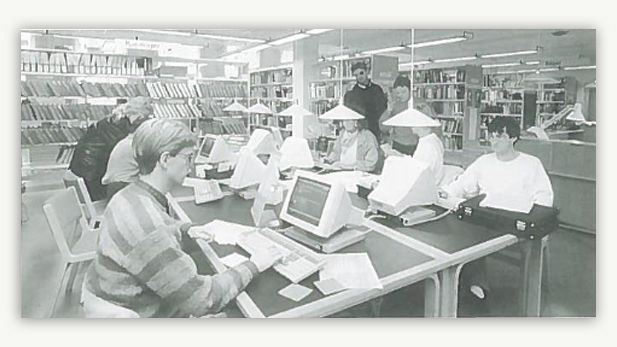 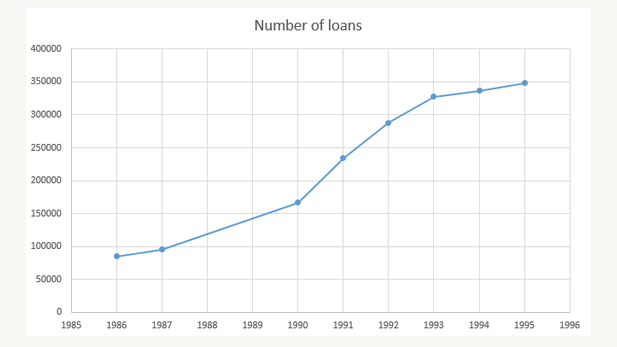 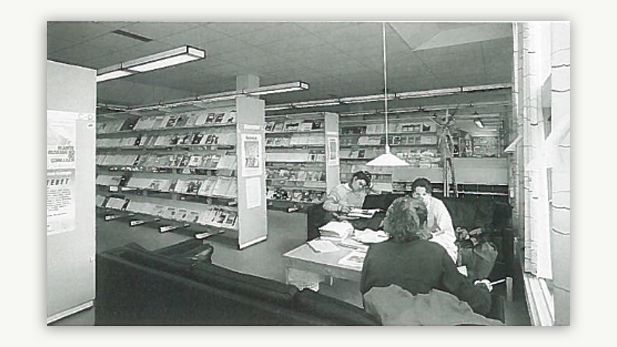 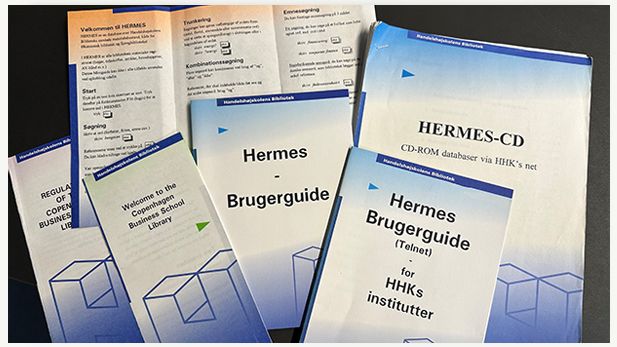 Lending explodes, we travel the world and bring back new ideas, the virtual library and library service evaluations are gaining ground. These are all characteristics of a decade that also sees the opening of the current library at Solbjerg Plads.

Online searching of the library collections becomes hugely important as it makes retrieval of books and other materials much easier. It also leads to an increase in lending, up from 85.000 checkouts in 1985 to 350.000 in 1995, a development that puts the library under enormous pressure and demands a renewed focus on acquisition policies and resource spending.

CBS research, through registration efforts by the library, also becomes searchable online at this time. Researchers and their activities are showcased in a completely new way and can now be searched by students and professionals via modem dial-ups to Hermes – the new online library system that was implemented in the late 1980s.

The advent of the internet provides new and better ways of organizing information and processes. In the 1990s, CBS Library, just like the rest of the world, is very much influenced by technological innovation.

The library is quick to adopt new ideas and is tasked with creating a CD-ROM based solution for local access by researchers and teaching staff to bibliographic databases from their office desktop. The new solution is branded Hermes-CD and initially comprises the databases ABI/inform, Predicasts F&S Index, and Econlit. The project required home-made technical solutions which was ”a very demanding but at the same time a very exciting job”, as Lars Nondal, current chief advisor with CBS Library, explained in the 1994 annual report.

The CD-ROM solution is available to students via stand-alone terminals within the library. Student often queue for access so implementing a booking system is under consideration.

If somebody wants to explore external resources, the dial-up is pretty costly, so this service is predominantly reserved for departments and companies.

It is also Lars Nondal, who tours CBS departments to install so-called gophers, the precursor to modern websites on faculty computers.They were purely text-based internet pages with links to resources such as country data from The CIA Factbook. 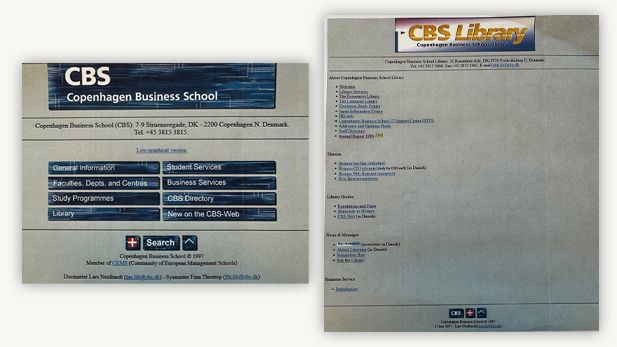 Screenshots of the CBS and CBS Library websites in 1997, retrieved via Wayback Machine

CBS launches its very first World Wide Web platform on 1 November 1995. The CBS Library IT department will be responsible for the maintenance and development of the website for many years to come.

The Library also operates its own web presence in the new cbs.dk universe. This website contains information about services and links to Hermes, Hermes CD, and Hermes Web. In the annual report it reads:  “Everything moves much fast on the internet. This is why it is important to provide CBS researchers with well-structured access to the sea of information that is the internet. To that purpose, in 1995, the library created the www-platform Hermes Web that provides direct access to selected resources, research communities, databases, etc.”

Hermes Web is an add-on to the gopher solution. Today the Hermes Web seems a hopeless endeavor as the purpose was to disseminate selected, relevant websites.

As should be evident from the above, 1995 sees a lot of new initiatives, including the inauguration of the Electronic Study Center, the ESC, which was attended by then president Finn Junge Jensen. In general, interest in this new area was immense.

From 1998, with the launch a new and more user-friendly Hermes interface, it is no longer necessary to know and master complicated codes to conduct meaningful research.

The documentation service, which started in the late 1980s, continues into the 1990s and is expanded further.

Its purpose is to help companies become more international and to provide information about markets and competitors. It is a great opportunity for library staff to stay on top of research skills and new technological innovations.

HB-info, the department within the library responsible for the documentation service, is also tasked with developing the online/CD-ROM-based information universe and the brand-new departmental services, the purpose of which is to help faculty and staff in CBS departments navigate resources through training.

Evaluations and user surveys put the user at the center

At the beginning of the 1990s, an evaluation of library services and resource spending is initiated. Through a huge grant, the library undertakes a thorough evaluation that involves questionnaires, statistical data, and the assistance of an international consultant.

Michael Cotta-Schønberg, the then head of the library, in a 1993 article about the evaluation in DF-Revy, a national library magazine, posed the question: "Are we performing to the best of our abilities?” There is a desire to develop services that meet user needs but at the same time, a strict prioritization of the library resources is observed due to the large increase in usage.

The report provides insights into user needs and user perceptions of the library.

The primary users are Handelshøjskolen students and staff, but students from other educational institutions also use the library. Surprisingly, the latter accounts for approx. 1/3 of users. CBS students also report that they too use other libraries.

There are extensive queues for popular books, something that is frustrating to users. Queues at search terminals, photocopiers, and the circulation desk are also causes for nuisance. Self-service terminals for checkout and check-in were not available at the time. Minimizing queuing becomes a high priority for the library.

Library materials are used extensively, primarily thanks to the new online search system, which has increased the accessibility of the collections significantly. However, users still find it difficult to operate the system and complain about the absence of guidance and training. The relatively new CD-ROM solution is only used by a minority of users.

The study also shows that the library needs to focus on quality control of internal processes as well as on raising the quality and friendliness of front-desk staff.

Overall goals for changes include:

Plans to consolidate campus and build a new library

In 1993, it is decided to consolidate Handelshøjskolen in Frederiksberg. A project for a new and unified campus "within leisurely walking distance" is initiated, and the library is part of the plan.

It will take several years for the new facilities to be ready for occupation, in fact until the turn of the millennium, but it will be worth the wait.

The area where Solbjerg Plads is located today is described like this in the 1993 annual report: "today, if you look from Frederiksberg Station on Falkoner Allé in the direction of Nordre Fasanvej, you will see nothing really except for railway tracks and old warehouses scattered about"

The new building will house the faculty of economics, the library, and the administration. It integrates state-of-art design solutions for classrooms, technology, and research facilities.

René Steffensen, the current library and campus director, was a newly hired librarian back in the early 1990s and as such was involved in the building project.

René Steffensen describes the work in this way:

"As a very young staff member, I got my first permanent job in 1994 with the specific task as a project assistant of implementing and furnishing the new library at Solbjerg Plads. Fortunately, the president at the time really prioritized the library and understood the need for it. Also the library management team was part of CBS senior management and as such wielded quite a lot of influence on the entire building project. That made it a relatively easy job.

The new library was beautiful and study seats plentiful because it was made a top priority, something that was almost unheard of in Danish university libraries on a large scale back then. At the time, the argument was that the students would rather work undisturbed from home.

The library found a lot of inspiration in the Economics Library at the University of Gothenburg, where they had shown that this argument was a falsehood. If you create a study seat, it will be used, it was that simple.

With the relocation from Rosenørns Allé, the library invested heavily in IT facilities for students, investments that were later scaled down as laptops became commonplace and access to digital content was made easier". 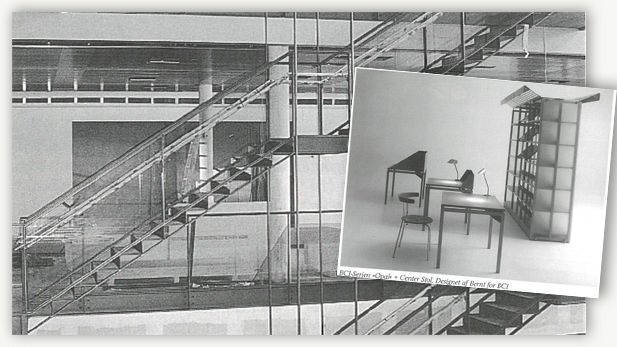 In December 1999, the library finally moves to Solbjerg Plads, where it remains, close to students and staff. The library was brighter and more attractive than the one left behind on Rosenørns Allé, and a lot more impressive with its four floors and undisturbed views from the lower-ground floor all the way to the skylights.

The furniture is custom-made and the library boasts far more study seats than ever before as well as a quiet reading room and a parade of group study rooms. Laptops are not standard for students at this time, so 54 search terminals are introduced alongside 150 PCs in a new Learning Resource Center.

The term "Learning Resource Center" originated in the US in the 1990s and was a hybrid of library and IT facilities as well as access to digital resources on a small scale.

The move itself took place in December 1999 and the library was closed for only two weeks. 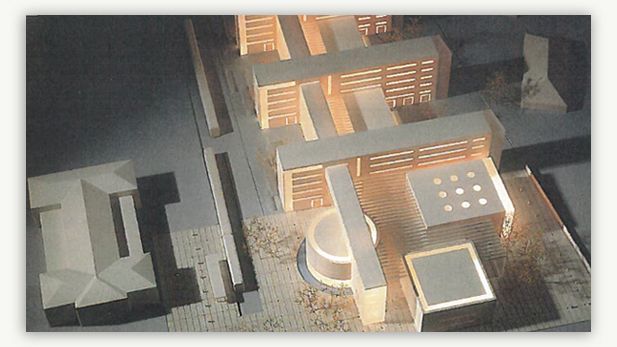 In the mid-1990s, a number of the younger members of staff are posted around the world. On their 6-8 weeks residencies, they find and bring back inspiration and new insights from other university libraries, including Berkeley University, Stanford University, Babson College, Vancouver University, and the Pompidou Center in Paris.

Online databases, CD-ROM solutions, internet resources, the Book-a-Librarian service, as well as an extensive and multifarious suite of courses are just some of the take-aways from these foreign postings, services that would be embedded and further developed at home in Frederiksberg.

Other initiatives in the 1990s

The Japan-Economics programme is launched in the 1990s and as a consequence the Language Library creates a dedicated collection of Japanese literature. Parts of this collection are still available from the current library collection. If, by the way, you are curious about Japanese culture, the library subscribes to AERA, a Japanese weekly magazine, which is available from the lounge collection on the 2nd floor.

The numerical call number system for books is changed once again. This time it is simplified to make it easier to locate books on the shelves. A large number of books from the older part of the book collection are discarded. In fact, around 30.000 books published between 1928-1962 that have not been checked out in the previous five-year period, are discarded at this time in an effort to keep the book collection as relevant and up-to-date as at all possible.

The library installs its very first anti-theft alarm system, and carries out more systematic shelf audits to combat problems of misplacement and "lost" materials. In fact, for several years, all library staff start their day of work in the library reviewing collections and checking whether books are in the right places.

The first library newsletter, BisLibNjuuz, is born in 1994 and channels information about library services, new acquisitions, and innovations. Library leaflets and mini-guides to the online catalogue are also published at this time.

Resources used in this article: