This special issue is a critical commentary to ongoing developments within the international tax regime, and the papers of this special are a result of the conference Inequality within International Taxation, which was hosted by CBS Law and organised by Yvette Lind in the fall of 2020.

Welcome to the Nordic Center for Climate Law and Economics (NCCLE)

The present group members are

The purpose of the climate law and economics research group

The purpose of the research group is to establish a strong group of researchers that can provide research in climate law in a Danish, EU, international and economic perspective.

CBS LAW is a significant legal environment for combining business law and economics and has several researchers within this field. This group of researchers has previously focussed on public private law, EU law, international law and WTO in an economic perspective. The starting point of the climate research to be conducted is how collaboration between the public sector and the private industry can provide relevant and innovative solutions to the climate change and global warming.

Climate law arises from the UN conventions, protocols and agreements.

The United Nations Framework Convention on Climate Change entered into force on 21 March 1994 and 197 countries that have ratified the Convention. The UNFCCC is known as the “Rio Convention”, negotiated at the “Rio Earth Summit” in 1992. Two other UN conventions were negotiated at the same summit; the UN Convention on Biological Diversity; and the Convention to Combat Desertification. Legislation is the key instrument in the Rio Convention (UNFCCC) as stated in the preamble. The countries   should   ”enact   effective   environmental   legislation,  that environmental   standards,   management   objectives   and   priorities   should   reflect   the environmental  and  developmental  context  to  which  they  apply,  and  that  standards  applied by  some  countries  may  be  inappropriate  and  of  unwarranted  economic  and  social  cost  to other countries, in particular developing countries”. Consequently, legal studies on climate law are of high significance.

Holding the increase in the global average temperature to well below 2°C above pre-industrial levels and pursuing efforts to limit the temperature increase to 1.5°C above pre-industrial levels, recognizing that this would significantly reduce the risks and impacts of climate change; (b) Increasing the ability to adapt to the adverse impacts of climate change and foster climate resilience and low greenhouse gas emissions development, in a manner that does not threaten food production; and (c) Making finance flows consistent with a pathway towards low greenhouse gas emissions and climate-resilient development.

The Paris Agreement does not provide negotiated binding national targets and common legislation. All measures and provisions regulating the effort are on a national legal level.

The CBS LAW climate law and economics research group will provide relevant legal research on an international, EU, and national level and will provide relevant knowledge on how to establish and develop collaboration among public and private parties. The law, the economics and collaboration will be key elements in the future climate change development and thus CBS LAW will contribute to the future global climate research environment.

Jaakko Salminen presents his research: From Market Contracts to the Circular Economy: Law and Holistic Conceptualizations of Production At University of Oslo Department of Private Law 24 September 1500 CET.

See the selected research from the group members

The issue illustrates the importance of climate law and economics research and showcases the research contribution from the CBS LAW climate law scholars:

Climate contracting through Public private partnerships or in the circular economy

Get to know us and our climate research here. 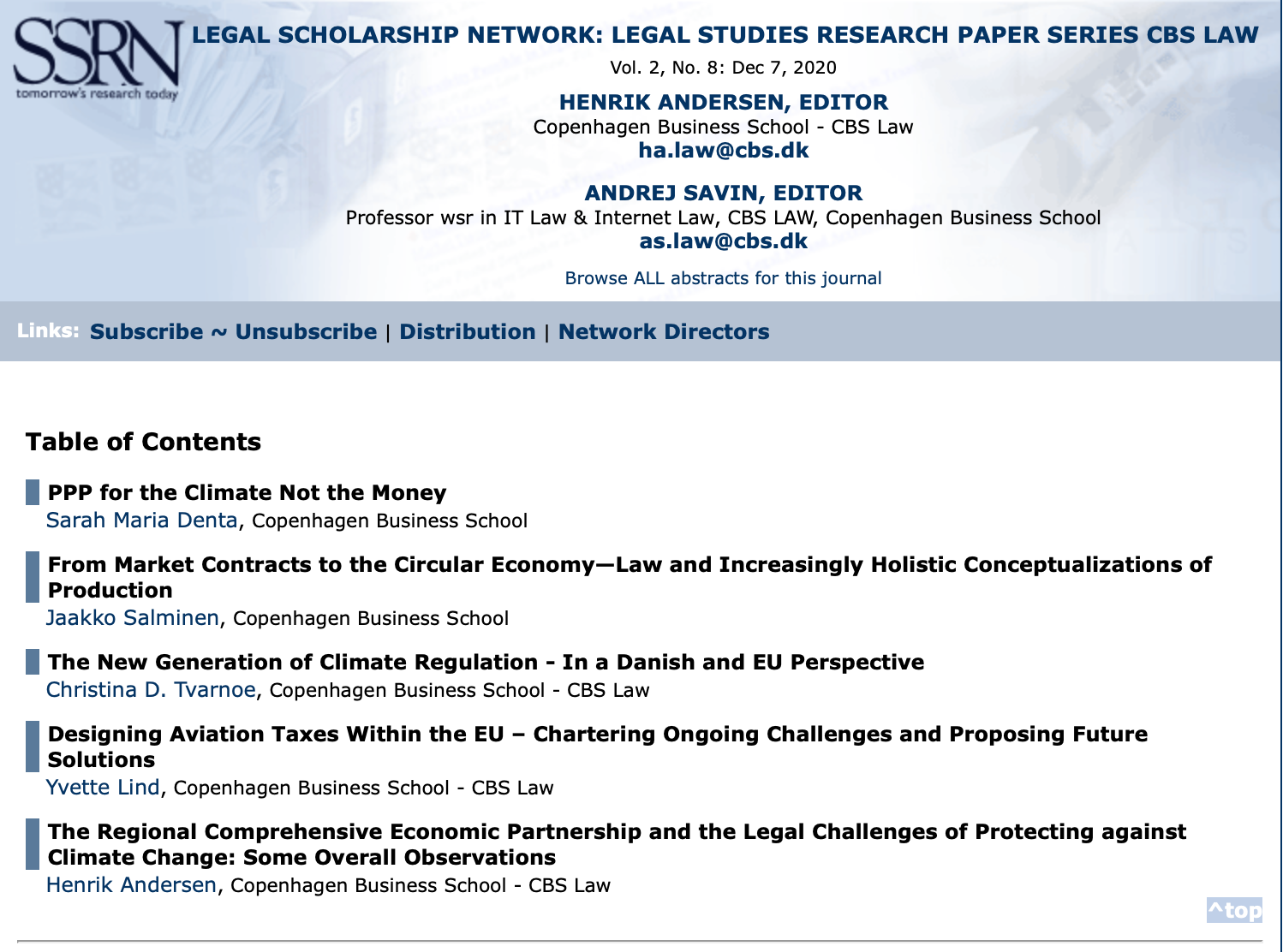