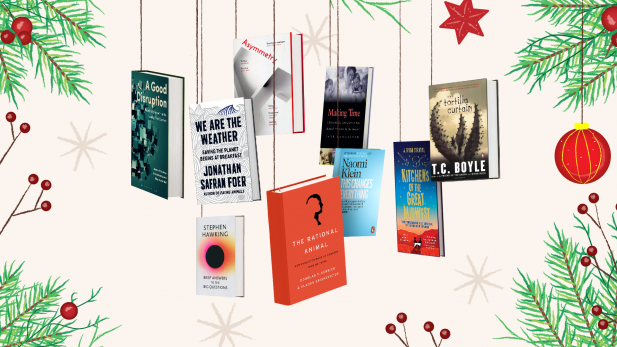 As a researcher, I have gotten so used to reading journal articles, concise and focused pieces, that I even more cherish books that take the audacity to fill up page after page with beautiful words. Great fiction has the ability to provide us with insight into the human mind, ways of living and imagining the world. It can make us stay open-minded and curious.

I have chosen three books that have left an enduring impression on me throughout the past years.

Having read this book a long time ago, it remains topical in not only North America and even more than twenty years after its publication date, given today’s political landscape. It is a story about the separation of worlds in one world, where the comfort that the middle and upper classes enjoy is not accessible for others. Narrating a story of encounter of these two worlds from both perspectives, Boyle makes the committed reader inevitably reflect on their own prejudices, ignorance, and arrogance. In addition, while the author has a certain wit to his writing, the book leaves the reader with a mix of despair and hope at the same time.

‘Kitchens of the Great Midwest’

A good friend of mine gave me this book a few years ago, because, in his words, “you like cooking”. The book indeed makes you want to get up, grab your kitchen gear and get to work or, alternatively, makes your mouth water. It also draws you deep into the story of protagonist Eva, following her from childhood to adulthood when she becomes the most sought-after chef of exclusive pop-up dinners. Of course, the craft of cooking – and its ingredients, recipes, mixtures, and textures – are a dominant theme of the book. However, it is much more than a book about cooking. With his precise observations and his intelligent yet uncomplicated language, Stradal creates a story about the trials and tribulations of life, about losing family and finding friends, and ultimately, about letting go.

I have only recently started reading this book. While I am not done yet, I felt it a worthwhile addition to this recommended reading list. Halliday spins three inter-connected stories about the imbalances, the “asymmetries”, we encounter in modern life: Gender, age, nationality, and power. I have just finished the first chapter out of three, where the young editor and aspiring writer Alice starts an affair with the much older and famous author Ezra Blazer (modelled after Philip Roth, for those interested). So far, I find this to be a personal yet political book. With her meticulous, funny, and elegant writing style, Halliday makes you wonder about your own dealings with the many asymmetries in life.

‘This Changes Everything: Capitalism vs. the Climate’

There is probably no book that has shaped my thinking about the global economic system, as much as Naomi Klein’s bestseller ‘No Logo’. It enabled me then to see the dark side of global business, and I am not sure if I would ever have become a business researcher without this knowledge. Her more recent book ‘This Changes Everything: Capitalism vs. the Climate’ might however be even more relevant. It is about this existential contradiction: On the one hand, our economic system is based on the idea of limitless growth. On the other hand, this growth is limited by our planetary boundaries, and there simply is only one planet. With passionate language and factual analysis, the author urges us to radically rethink the way we organise our economic system before it might be too late. She warns against false hopes and actionism, and calls for a rational approach and self-critical thinking.

‘A Good Disruption: Redefining Growth in the Twenty-first Century’

Companies that hold on to old thinking are certainly doomed. This makes forward-looking, visionary ideas all the more important. The book ‘A Good Disruption: Redefining Growth in the Twenty-first Century’ provides these essential ideas. Described as a ”manual for saving the world”, it gives an optimistic view of the future of our economic system by turning an existential threat into business opportunities. It might not be a new finding that global economic growth is currently being measured incorrectly, as the required resource consumption is neglected. The authors therefore challenge the conventional wisdom that our global economies should be organised in a linear way. They also demonstrate how we could establish a business world built on circular supply chains. What is new, according to the authors, is that technologies finally enable us to re-use and re-cycle global resources rather than destroying them forever.

‘We Are the Weather: Saving the Planet Begins at Breakfast’

Foer spent years working on ‘We Are the Weather: Saving the Planet Begins at Breakfast’. The result is a carefully researched book that asks the question why humanity has chosen a path that could lead to its extinction, while it would be so much nicer to rejoice in life. It seems that the climate crisis is too abstract, so we ignore it. The book is not limited to finding problems. It reminds us of the necessity of joint action, and the author provides many solutions that can be put into action right away. The book is not as loud as some of Foer’s previous books. This might be why it has such a powerful impact on many of its readers. After reading the book, Dirk Rossmann, a billionaire from Germany and founder of the country’s second largest drugstore chain, was so moved that he recently sent 2,000 copies to all members of the German parliament and numerous decision-makers from the business world.

‘The Rational Animal: How Evolution Made Us Smarter Than We Think’

Science is about solving mysteries. This was the authors’ motivation to write ‘The Rational Animal’. They take the reader on a journey to the quest for “deep rationality” outside conscious awareness. Through recent scientific findings, you learn how deep rationality influence our human decision-making.

This book greatly inspired Morten Holm’s and my research on life history strategies. Life history theory is about biological trade-offs. Some animals and humans live in the fast lane, while others pursue a slow and steady path. Tenrecs are subject to turbulent environments. They follow a fast life history strategy. Tenrecs reproduce as much as they can, as there might be no tomorrow. Elephants, living in a rather stable environment, follow a slow strategy. They prioritize being a competitive mate and a better parent in the future. The book nicely illustrates parallels between animals and humans. If you want to know more about loss-averse capuchin monkeys, suicidal turtles, and Silicon Valley billionaires, I urge you to consider this book.

‘Brief Answers to the Big Questions’

For this book, Stephen Hawking asks simple, yet fundamental questions. He shares his points of view and uses scientific evidence to support them. Children could easily have asked the question: How did it all begin? Hawking has written the book in a very comprehensive language with many humorous elements. Despite the references to science, it could be read to children, too!

I hope you enjoy the following excerpt as much as I did: “If intelligent life exists somewhere else than on Earth, would it be similar to the forms we know, or different? – Is there intelligent life on Earth? But seriously, if there is intelligent life elsewhere, it must be a very long way away otherwise it would have visited Earth by now. And I think, we would´ve known if we had been visited: it would be like the film Independence Day.” (p. 79)

This book inspired me to reflect on easy but powerful questions and to compare common beliefs with scientific evidence, realising that they do not always have to contradict each other.

‘Making Time: Lillian Moller Gilbreth. A Life Beyond “Cheaper By the Dozen”’

Some of you might have seen the movie or read the book ‘Cheaper by the dozen’. It is about Frank and Lillian Moller Gilbreth, efficiency experts, and parents of twelve children. Jane Lancaster’s biography of Doctor Lillian Moller Gilbreth (1878-1972) goes beyond her image as a mother of many children, as portrayed in ‘Cheaper by the dozen’. Instead, it highlights her achievements as engineer and management consultant, in addition to being a mother. She is described as a modest but influential person. The book focuses on how she continued and advanced the joint work with her husband after his death. It was very unusual at that time.

As a psychologist, she wanted to emphasise the human element in scientific management. The biography describes her rich and unusual life. You will follow her life from childhood, over 20 years of marriage to over 40 years as a widow raising eleven children. While at the same time, she would travel the world to pursue her career. Even though times have changed, this book can still be a source of inspiration on how to best allocate your limited time.