CBS has appointed Lise Kingo – CEO and Executive Director of United Nations Global Compact, former Executive Vice President at Novo Nordisk and holder of a Graduate Diploma from CBS in 1992 – Distinguished Alumna of the year 2018. Kingo is being awarded this honour because of her leadership values and efforts within corporate social responsibility (CSR) throughout a prominent career that has made her a Danish role model in an international top position. 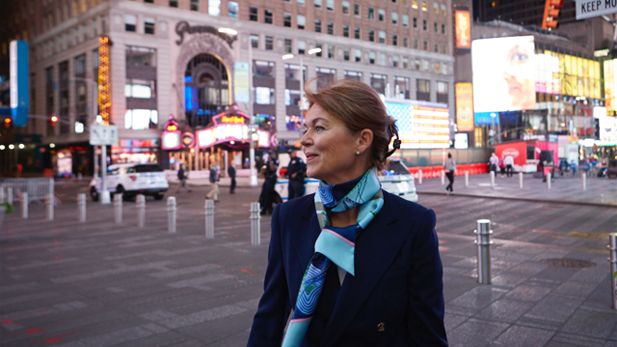 - Lise Kingo is a CBS alum in whom we take great pride. She is a role model, not just as a Dane and woman in an international top job, but also by virtue of the leadership values she represents. Throughout her career, she has worked in the intersection between social responsibility and management, which is also central to CBS’ values today. So, we highly appreciate that Lise Kingo has chosen to be appointed CBS Distinguished Alumna 2018, says Per Holten-Andersen, President of CBS, about the appointment.

Since 2015, Kingo has served as CEO and Executive Director of United Nations Global Compact and is in charge of ensuring corporate co-responsibility to achieve the 17 UN Sustainable Development Goals (SDG) before 2030. In addition to being responsible for working with CSR at Novo Nordisk, she was also chair of the Danish Council for Corporate Responsibility under the Danish Business Authority (2012-15) and has worked a great deal with CBS’ CSR research and education environments.

- This appointment as distinguished alumna means a lot to me. It is a great honour and a huge privilege to receive this type of recognition by my former university, especially since CBS is so strongly committed to CSR. I’m looking forward to attending the awards ceremony and being key note speaker at CBS Alumni Day in May, says Lise Kingo, who is a strong advocate for the importance of educating oneself within various academic disciplines with a view to making a difference in this world.

The life of the newly appointed Distinguished Alumna has not been characterised by frequent changes, but rather significant ones. This applies to her education, where after earning two bachelor’s degrees in the humanities – one in Ancient Greek Culture from the University of Southern Denmark and one in the Science of Religion from the University of Aarhus – she earned a Graduate Diploma in Marketing Economy at CBS, which at the time was named Handelshøjskolen i København, while working in her first real job as a promotion coordinator in JP Marketing.

- Humanist studies – how religion and Greek and Roman cultures serve as a basis for our norms, values and principles – have always been of great interest to me. But it quickly became clear to me that if I wanted a gratifying job, it would be in business. So I quickly embarked on doing a Graduate Diploma while working full-time in the advertising agency, Kingo explains, adding:

- Humanist values and principles are, combined with my ambitions, what have driven me throughout my career. I have worked almost constantly to ensure both sustainability and social responsibility as sound, profitable business practices – preferably making the one a prerequisite for the other.

The presence of a few, but significant, changes is also a feature of Kingo’s career, her CV on LinkedIn listing only three places of employment: JP Marketing, Novo Nordisk and the United Nations. While working she also earned two additional degrees, an MSc in Responsibility and Business Practice from Bath University and a Certificate in Corporate Governance from INSEAD, which clearly illustrates both her commitment to CSR and her ambitious desire to constantly improve her qualifications.

On the long journey to develop Novo Nordisk

Kingo began her journey with Novo Nordisk as a replacement during maternity leave at its industrial enzyme division’s, now Novozymes’, advertising department. She made a good impression and was offered a permanent position, only to be offered a new position a couple of years later as the head of a new department that would work with sustainability and publish Novo’s first environmental report.

This became a pattern, where Kingo was offered new challenges and more responsibility at Novo Nordisk almost every three years. First she was offered the position of Director of Environmental Affairs, where she was also put in charge of the technical environment department, and since that position as the Director of Stakeholder Relations, where she was responsible for the environment, working environment, HR and communications.

After an additional three years, Kingo was offered the position of Executive Vice President of Corporate Relations, which she held for 12 years and where she was also responsible for quality and internal auditing.

- It was great to be part of the dream team that took Novo from being a major Danish export company to becoming a strong global group that was successful not only financially, but also socially and environmentally. An amazing journey, says the former executive vice-president.

CSR from the very beginning in Novo Nordisk

Lise Kingo’s work with CSR began as far back as Novo’s industrial enzyme division, where the company saw both the obvious risks in the growth of environmental awareness and the opportunity to make its products part of the solution to environmental issues.

- I’ve always believed that responsible business is good business. But when you work in a business, you can only break through with new approaches and mindsets if they involve the core business priorities and benefit the company, asserts Lise Kingo, pointing out:

- I’m very proud of how Novo Nordisk created its success by making it a long-term, holistic business strategy to take the environment, people and ethics into consideration in everything it does. Our work with the triple bottom line was a very new method in the 1990s and made Novo a pioneer and role model for what has now become very widespread in the business community today.

New York with a triple bottom line in the diplomatic pouch

One wish that was never granted throughout 26 years at Novo Nordisk was to work abroad, even though it was discussed numerous times. Even though Kingo has worked globally for 25 years, she has never worked and lived abroad. When the chance arose to go to New York to promote CSR worldwide, turning down the opportunity was unthinkable.

- When I was offered the position as CEO and Executive Director of the United Nations Global Compact, I was at a point in my life that made it possible for me to accept this fabulous offer: my son is studying in Amsterdam, my parents are in the best of health and my husband has his own company and an excellent general manager, which means that he doesn’t need to be present at all times. Everything simply fit perfectly, explains Kingo, and continues by describing her new life in New York:

- Living in New York is great, and the United Nations is an incredibly exciting place to act and work in. I’ve always dreamt of being a diplomat. Now I am and get to play that role. Learning about this new discipline, being a diplomat and politician, is exciting and demanding, and promoting an agenda that I consider to be crucial to everyone is highly rewarding.

The 17 UN Sustainable Development Goal (SDGs) are part of the UN’s 2030 Agenda to end poverty and hunger. The United Nations Global Compact, which Kingo is now the CEO and Executive Director of, is a management platform under the Global Goals that focuses on developing, implementing and spreading responsible business practices in accordance with ten universally accepted principles on human rights, labour, the environment and anti-corruption.

- It was an incredible moment when the Global Goals were adopted in the autumn of 2015. We’ve never been in this situation before, where UN goals have achieved almost universal support, not to mention the momentum that the goals have. Moreover, unlike earlier, today we have access to data that specifically allows us to measure the improvements that take place against the 17 SDGs, says Kingo, but points out that:

- Unfortunately, the Global Goals are not being disseminated very well and 2030 can seem like a long way off into the future. Consequently, to create a burning platform, I’ve pointed out that we only have 5,000 days left to make the world a better place. That’s the kind of language companies understand and they are also aware that there is no plan B. On the other hand, there are multiple new business opportunities and the chance to create a better, more peaceful world.

According to Kingo, the challenge is making sure that the energy and momentum are maintained to ensure that the word continues to spread, not just among companies, but everywhere, from governments to individuals. So far, more than 75 percent of the companies in the Global Compact are working on the goals at the executive level, also putting demands on subcontractors. At the same time, various financial institutions have begun to view the SDGs as a gift from an investment perspective because they provide clear guidelines on the direction the world should move in.

These are certainly efforts worthy of a CBS Distinguished Alumna.