In your own words: Jacob Kildebogaard, CEO & Web Analyst

In your own words: Marie Bach Nielsen, Art Space Producer

In your own words: Lisbet Andersen, Lawyer and Partner

In your own words: Merete Wedell-Wedellsborg, PhD with a business psychology practice

Friends are everything when you study at CBS. That is what comes to mind when Merete Wedell-Wedellsborg looks back on her time as a PhD student. A time that meant both passing through “the valley of despair” and many hours of the night in front of her desk. 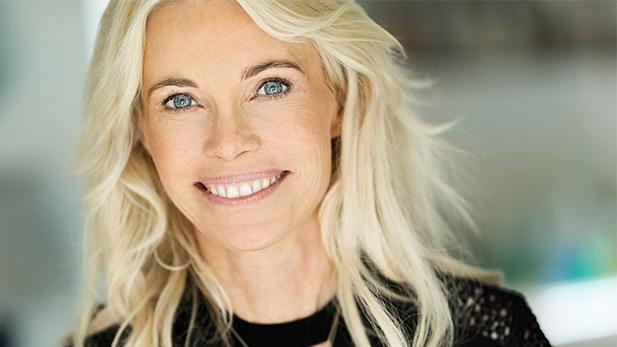 "Friends are everything when you study at CBS. They make you sharper, more skilled, and more productive – and you can have a laugh together." (Photo: Miklos Szabo)

What were you like when you studied at CBS?
Like many others, I went through the “valley of despair” as a student at CBS. At first, I felt like “how hard can it be? 3 years to write a PhD and doing my job at the Royal Danish Defence College…” We had small children, had just moved into an old house, and my husband was had just started in a big management position.
I optimistically saw my PhD studies at CBS as a great way of balancing things out. I became wiser. I hit the valley of despair with full force and realized that we really had to grit our teeth to get everything done. I ended up working on my thesis at night and then I learned to engage with my fellow students and my wise supervisor Anne-Marie Søderberg very actively. Without Anne-Marie’s and my clever husband’s support I would never have succeeded.
Friends are everything when you study at CBS. They make you sharper, more skilled, and more productive – and you can have a laugh together. You do not get through a PhD programme without some humor. Support is not only good conversations but also being challenged: “Why don’t you just give up? If it is that awful, then quit!”

How did you get your first job after graduating from CBS?
Before my time at CBS, I had a job as clinical psychologist and later as management development consultant at the Royal Danish Defence College. It was my dream job where I got to try everything from testing fighter pilots, being sent to mission areas, and advise the top management at the Defence Command.
Throughout my studies at Copenhagen University, I had student jobs. It is through student jobs that you learn what you want to do in your career. I worked for Politiskolen (the police academy) and later for Flyvevåbnets Officersskole (the air force officer training centre) while I was studying. I was a figurant in Politiskolen’s exercises and would afterwards give the police cadets feedback. I flew with fighter pilots and tested them in the selection phase. I volunteered for all kinds of tasks in the Defence Command; both the boring tasks where I would manually type data from examinations, and then my supervisors let me take part in tasks that were very challenging and exciting, for an example to assist in interrogation exercises  where the officers would be pushed to the limit.

Which moments in your career have been defining – and why?
I can think of at least three moments that have been turning points:
First, as a psychologist at the Royal Danish Defence College I travelled a lot in conflict zones and debriefed and worked with the management of the defence. When I was pregnant with our first child, I was sent to an accident on Greenland. First, I was sitting on a shaking plane for hours and then, when the plane landed in the snow, the beautiful and unique nature of Greenland opened around me. When I was sitting with the soldiers, who were devastated to have lost their friend, sensing the special bond that forms between dogs and soldiers on the ice, I became overwhelmed and quiet.
Most often, we hear about the Danish soldiers that have been deployed to war zones in Afghanistan, the Balkans, and Iraq. But Danish soldiers make an enormous effort in other flashpoints around the world.
It induces respect. Respect for the human strength, but also for our dealings with nature.

And:
Second, 10 years ago, a client asked me how to work with ‘sustainable high performance’. I could not answer right away and I decided to examine the method behind the long-term and consistently big performance. That question made me travel to Nato Defense College, Westpoint, and interviewing more than twenty top leaders.
The whole thing culminated in my book: “Battle Mind: Performing under Pressure.”

Lastly:
Finally, my stay at Stanford University at Scandinavian Consortium for Organizational Research (SCANCOR). That was such an intense time. My husband and I went for three months with the kids, and even though my husband held meetings at night with colleagues in Copenhagen and I was writing the last parts of my thesis, it was a time with great experiences with the colleagues at SCANCOR and the superb life at Stanford.

What is the most valuable experience you gained at CBS that you still use in your daily work?
As a student at CBS you learn to spend your time valuably. I knew that my scholarship was for exactly three years and I handed in my thesis precisely the day before the deadline. It is really easy to let a PhD programme extend for longer than planned because there is constantly something more interesting and just as relevant to include in the thesis.
So both as a student and later in your career, you must maintain your focus. I’m fortunate because I have never been good at procrastinating.  Sometimes, that drives my surroundings crazy. Do it right away, if you know that you need to get that section written, spoken with your advisor, or given your fellow student feedback.
It is human to postpone or avoid unpleasant decisions. But if you know that you have to do something within the next couple of months then just do it now!

Have you maintained a relation with CBS since you graduated?
In the world that I came from, the Defence, and the world I work mostly in now, the financial sector, there are many talented people - and an overrepresentation of men. At CBS, I met some talented women who in each their way have put their mark on my career. Professor Anne-Marie Søderberg (at the new ICM-IBC Department) has been my sounding board and a great support in the years where I wrote my thesis but also in the past 10 years where we have developed a more symmetric relationship. Professor Majken Schultz, Associate Professor Mette Morsing, and Associate Professor Anette Risberg are also sources of inspiration.

Do you have some career advice for future graduates?
1) All after-work meetings and career event at CBS are job interviews. When there is a panel of two headhunters, some business managers, and your own professors, make sure to prepare what you want to ask before going to the meeting and be prepared to walk up and present yourself afterwards. EVERYTHING is a job interview. It will be noticed if you ask a bold and intelligent question – and preferably with an edge. CBS does not have a backstage where you can slouch around in your comfy pants and have an off-day. It does not exist. CBS is frontstage so give CBS the best you have – and leave your darker sides by the entrance. One of my clients has a motto: “Deliver or Die.” Even though a PhD or MBA programme is not a matter of life or death you can still be driven by some of the same feelings that people in elite corps are driven by.

2) Take care of yourself and the people you care for. They will be the most important persons in your life, no matter what you deal with at CBS. Your true character will be revealed in crisis. Take the time to be present when you spend time with your partner or friends and family. Your closest relations will be the ones to help you through your studies.
Without my patient husband, who night and day took the time to discuss topics from my PhD thesis with me, and my three cheeky and lovely children, I would never have managed to get through a PhD programme.

In your own words: Marie Bach Nielsen, Art Space Producer

In your own words: Lisbet Andersen, Lawyer and Partner