Entrepreneurs and investors meet at CBS

CBS’ Copenhagen School of Entrepreneurship (CSE) helps start-ups go from idea to business, for example by hosting events at which entrepreneurial hopefuls pitch their business ideas. CBS Alumni joined an event to hear why CSE is reaching out to more alumni. 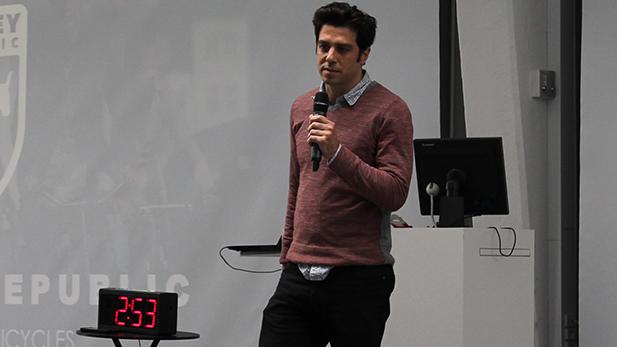 For years, the Kiln Hall was home to the scorching hot ovens of the Royal Copenhagen Porcelain Manufacturer. Today, the large room that CBS uses for lectures and events is almost quiet. On a stage at the far end of the Hall, the digits on a large digital clock change from 3:00 to 2:59. Erdem Ovacik takes a breath and begins his elevator pitch.

- Imagine you are sitting in a train in the morning on your way to work. You can walk the rest of the way in 20 minutes or you can take a bus in 15 minutes. But you don’t need all of that if you can simply use a bike. That is what we are doing at Donkey Republic, he explains to the audience of about 100 people at this CSE Startup Friday & Mustard Seed event.

Erdem Ovacik is CEO and co-founder of Donkey Republic, one of nine new businesses pitching their ideas in the Kiln Hall on 22 May. Together with the rest of his team, Erdem Ovacik wants to build a business on low-cost city bikes that can be easily rented and unlocked with a smart phone, and which can be parked and picked up anywhere in the city.

The next step
When his three minutes are up, Erdem Ovacik is asked a critical question for any business in the making.-

If you raise the money you need, what next steps will you take?

The questioner is one of the reasons why the Kiln Hall is packed with business ideas today; Alex Pitt is co-founder of Mustard Seed Impact. He is visiting CBS to hear entrepreneurs pitch their ideas on everything from city bikes to walking aids for the elderly.

Mustard Seed is a London-headquartered impact investment firm. They seek to create businesses that generate positive and sustainable outcomes, connecting a network of global members with entrepreneurial talent across the world. They believe that solving social and environmental problems can drive commercial success in the long run and look for companies that generate positive outcomes in education, environmental sustainability, economic inclusion, health, and family and the community.

Mustard Seed was co-founded by Alex Pitt and Henry Wigan.  They were first classmates at the London School of Economics and later colleagues at Goldman Sachs. In 2013, they observed a rising interest in socially-minded entrepreneurship among what they saw as the world's most talented graduates. They also observed a lack of capital to adequately address this need, and for that reason they started Mustard Seed to bridge that gap and have subsequently hosted events at a number of universities across the world.

The logical place
Mustard Seed has invested in a number of social entrepreneurs including What3words, which gives every place on earth a unique address with just three words that identifies a 3x3m square, including in poorly addressed countries in the developing world; and Winnow Solutions, who are already having an impact in reducing food waste in commercial kitchens across Europe, and soon beyond.

This was Mustard Seed’s first visit to Scandinavia, and to Alex Pitt CBS was a very natural place to start.

- We chose CBS because of the stellar reputation and brand name that CBS has as a university. Next time we come – and I expect there will be a next time very soon – we would like to open up the event to other schools across the region. But for a first event in Scandinavia, CBS was a very logical place to do it, says Alex Pitt.

The event at CBS is one of several that Mustard Seed is hosting at leading universities across the world including in the UK, Australia, France, Germany, Netherlands, Poland, Portugal, South Africa and Spain. And the quality of the nine ideas at the Kiln Hall has been very high, says Alex Pitt.

- I won’t mention specifics right now because I need to debrief with my team. But there are probably three or four teams that we would like to follow up on with a view to invest, and there are lots of connections between what some of these companies are doing and our existing portfolio of companies. So we will definitely be helping almost all of those companies in some way – even if we don’t invest.

Alumni are welcome
The event at the Kiln Hall was hosted by Copenhagen School of Entrepreneurship (CSE), and in addition to Mustard Seed also saw participation from den Sociale Kapitalfond (the Danish Social Venture Capital Fund), which invests in social businesses in Denmark. CSE is part of CBS and works to support start-ups created by students or graduates from higher education programmes.

- We do what we can to help new businesses and aspiring entrepreneurs as much as possible. Without collecting rent or demanding a share of the company, we offer e.g. office space and meeting rooms, and we help them get in touch with the right people or host events like this, explains Mads Ejstrup Frederiksen, Investment Coordinator at CSE.

They have hosted CSE Investor Day three times before, at which start-ups have pitched their ideas, and on average 1-2 businesses have found investors this way. CSE also collaborates with a number of organisations and investors, and Mads Ejstrup Frederiksen would very much like to hear from CBS alumni.

- There is no particular profile we look for in a mentor, and you don't need to be a serial entrepreneur. In fact, many of the budding businesses need guidance within specific sectors. As a mentor, you can choose which start-ups you want to be attached to.

Out in the real world
When all presentations are over, Donkey Republic's city bike idea is the most popular among the audience who have voted online. 44 percent put Erdem Ovacik's pitch in the top three.

- It was fun to pitch to students, because they can relate to our project. But of course it was also very interesting to have investors present. And whether we can raise more capital or not, we already have enough to continue for the foreseeable future. Now the next step is getting the bikes out in the real world, and that will happen in August.

Read more about CSE and contact them if you want to become a mentor etc.