Professor Lasse Heje Pedersen and his co-authors have won JFE's Fama-DFA Best Paper Prize for their paper: 'Betting against correlation: Testing theories of the low-risk effect'.

FRIC researchers occasionally give lectures to more general audiences. Examples of public outreach are given below.

Here you can find FRIC's participation in public outreach. We have produced 4 videos in Danish, which you can see below, where Center Leader David Lando explains key concepts such as Frictions or Liquidity in Danish.

You can also find videos where FRIC members present at conferences or public lectures.

In September 2016, Jens Dick-Nielsen presented his paper The Cost of Immediacy for Corporate Bonds at the MIT Golub Center for Finance and Policy 3rd Annual Conference –  you can now see the paper presentation in the video here:

Jens Dick-Nielsen’s presentation starts at 16:57 and he is on again in the general discussion starting 1:09:00.

See the video where Jens Dick-Nielsen explains his research project The Liquidity of Danish Mortgage Bonds. The video was created in 2015 in connection with the CBS publication: 'Samfundsrelevant forskning', it is in Danish, subtitled in English.

Video: David Lando on 'capital demands for banks' (in Danish)

FRIC at the Science in the City Festival 2014 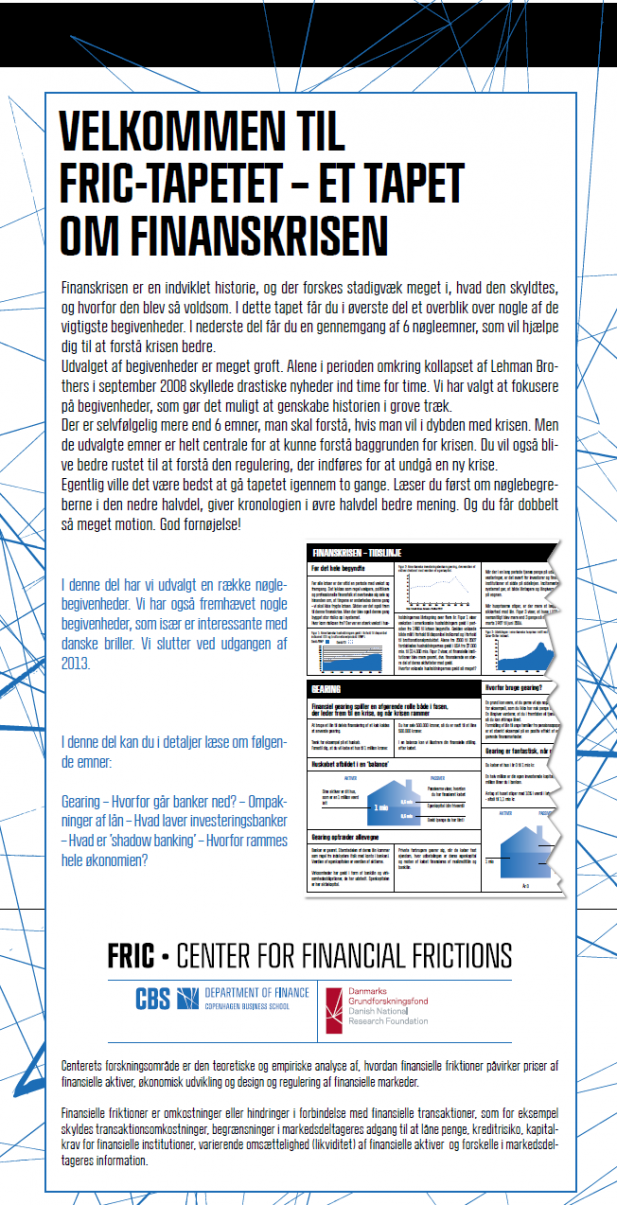 The Science in the City Festival was a free festival for the general public. At the festival, we displayed our impressive 20 meters long FRIC Tapestry, we invited participants to pass by the FRIC Lounge and Center Leader David Lando gave a talk on why regulation cannot curtail crises.

The FRIC Tapestry is a 20 meters long account (in Danish) of the financial crisis from 2008-2013. The tapestry shows a timeline of the crisis and explains 6 key concepts that help to understand the mechanics of a financial crisis. You can have a look at the tapestry in the online version here at www.cbsfrictapet.dk and learn more about the evolution of the crisis from the beginning and till today or you can pass by the canteen at CBS Solbjerg Plads where you can see the long tapestry hanging in all its splendor.

On Saturday, June 21, David Lando gave a talk on why regulation cannot curtail crises. In his talk David Lando shed light on how the financial world always have sought to steer clear of regulation in creative ways, and how the seemingly best solution for one crisis became the foundation for the next. Download David Lando's slides here: David Lando_Regulering

In the FRIC Lounge, the focus was on the key concepts of a financial crisis. Here you could find posters on 4 subjects and listen to 4 videos (in Danish) where David Lando talks about frictions, American call options, liquidity and more.

Find pictures from the Science in the City Festival here

On December 2, 2013, Prof. David Lando participated in a public lecture/debate night with two other economists at Videnskabernes Selskab.

See the video where David Lando explains to a general audience the notion of Leverage and Bank Runs (video from 0:00:48, only available in Danish).