Member of the boards of a number of foundations, e.g. Mødrehjælpen af 1983 (National Council for the Unmarried Mother and Her Child), Løgumkloster Refugium, Slesvigsk Samfunds Fond (Foundation for the Society of Schleswig), The Foundation of Prince Joachim and Princess Alexandra, and the Accounting Council of the Danish Business Authority.

Has contributed to research and teaching in accounting, e.g. through textbooks about accounting and articles in various publications, including annual publications from the Danish State-Authorised Public Accountants (FSR).

Has also made contributions to books on other topics, including the publication "Hvor blev det Grundtvigske af? (What happened to the Grundtvigian tradition)" (2004) and "Andelsledelse (Co-operative management)" (2004).

Andreas Nicolaisen, CBS' first honorary alumnus, can look back on more than 50 years of highly responsible posts in both the private sector and charitable foundations. Through all these years he has been working to help others - also in interaction with CBS 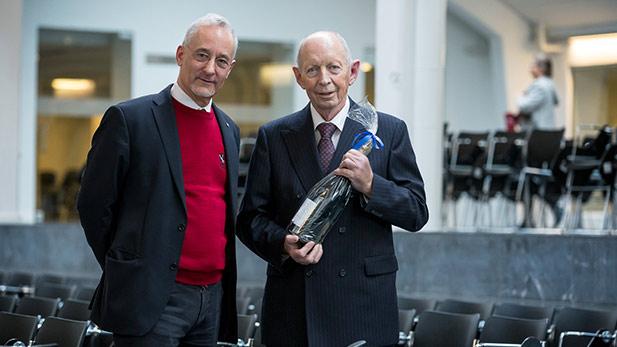 At the end of the 50s, Andreas Nicolaisen went to high school in Tønder. He rode on the bus every day, and this was where his future thoughts on becoming an accountant were born.

- I often spoke with an elderly gentleman on the bus. He told me that it would be wise to become an accountant. So after I had finished high school I went to Copenhagen and got a job as an assistant accountant, says Andreas Nicolaisen.

The 75 year old accountant is CBS' first honorary alumnus. He has earned this title for his contribution to accounting and his voluntary work, which has been highly beneficial to CBS. He has chaired the Danish Society for Education and Business (DSEB), the Corps of Examiners for Business Education at Universities, and CBS Academic Housing - just to mention a few.

People who have worked with Andreas Nicolaisen describe him as 'truly dedicated', 'thorough', 'decent', and 'an accomplished accountant' - all qualities he acquired at Copenhagen Business School, if you ask Andreas Nicolaisen himself.

- I wasn't very committed to begin with, even though I've always been hard-working. But when I started my studies at Copenhagen Business School, I felt an urge to influence things and learned that I in fact was able to.

Work, work, work
In 1960, he started studying the diploma programme in accountancy at CBS. He worked from 8 in the morning until 4 in the afternoon and went to school from 5.30 pm until 9 or 10 in the evening - four days a week. On the fifth day, he worked with a private study group. Back then it was normal to work on Saturdays, so he did.

- I liked to learn and I liked the fact that I was getting better and better, but it was work, work, work. I didn't have time for social activities or my family. Education today is much more humane. Today, no one would ever put up with the way we worked back then, says Andreas Nicolaisen.

The time as a diploma student was tough. More than half of the students didn't pass their exams and some of them dropped out, too. So it was a proud moment when he earned his degree. Asked by friends and family what the new title was all about, he always replied that it meant that he was unstoppable.

Teaching and lectures
When he began studying for his state-authorised public accountant degree, he stayed confident. He still went to class at Copenhagen Business School, however, the Danish State-Authorised Public Accountants (FSR) were in charge of the programme, and it took place at a more moderate pace.

He became a state-authorised public accountant in 1969. 1969 was the only year up to now, where he did not interact directly with CBS, because in 1970, he was hired by CBS to teach accounting and auditing. He discovered his talent for teaching, and he enjoyed it, too.

- Teaching and lectures have always been a huge and recurring part of my life.

Highlights
Even though Andreas Nicolaisen's accomplishments in the private sector are enough to make anyone feel envy, there are other things that he is even more proud of. He considers working for the charitable foundations highlights of his life.

When he was chairman, DSEB decided to invest DKK 360 million in two properties at Porcelænshaven, which were refurbished and let out to CBS in 2003.

- Porcelænshaven was a proud moment for me, because it was a massive investment for DSEB. And I take pride in the fact that so many people have benefited from this. When you have the ability and the possibility to move something to somewhere better, then it's your duty to do so, says Andreas Nicolaisen.

Another highlight was his work on the board of The National Council for the Unmarried Mother and Her Child (Mødrehjælpen), in which he was engaged shortly after its establishment. Working with Mødrehjælpen opened his eyes to social work.

- A unifying principle behind my foundation work is that I have insight into management, accounting and auditing - all competences that are popular within foundations.

He characterises himself as an almost perfectionist. He strives for perfection, but accepts that it is impossible to get everything done, because in collaborations it is difficult to find the perfect solution.

- When I advise someone to do something, I need them to listen. But I also need them to make their own decisions. What I say is not decisive. What is important is that you have understood what I said, and then you have to make up your mind whether you feel the same.

No such thing as a Nicolaisen decision
CBS' honorary alumnus is not a man who likes to talk about himself. Despite all his efforts to benefit CBS, he is not of the opinion that he has left his mark on CBS.

- I’ve never wanted to shine a spotlight on myself. I’m here to do something for others with the help of others. Obviously, CBS Academic Housing has turned into something big, but I cannot claim all the credit for that. There were three of us on the board, and what we did together made the Foundation a success. There were no such thing as a Nicolaisen decision.

But even though he is not of the opinion that he has left his mark on CBS, he takes a lot of pride in being CBS' first honorary alumni. When he received the invitation for the award, he invited his family, had a glass of champagne and shared the good news. His oldest grand child, who recently began studying International Business at CBS, also joined the festivities.

- I am very proud to win this honorary award - this title means a lot to me. Copenhagen Business School has been a large part of my life for more than 50 years. This recognition makes be both proud and happy.