Not all banks will survive the fintech revolution

We are in the middle of a fintech revolution that is changing the landscape of companies and institutions in areas such as banking, insurance and financial payments, says Professor Robert Kauffman. He has a background in banking, has worked at universities in Asia and the United States, and is a newly appointed Endowed Professor in Digitalization at CBS. 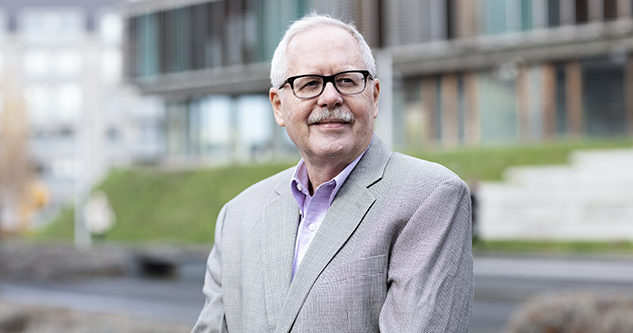 Robert Kauffman in front of his new workplace at Frederiksberg looking into the future where new research projects await. Photo: Bjarke MacCarthy

The so-called dot-com revolution happened at the turn of the century. Most people know the speculation bubble and crashes on stock markets that brought down companies we barely remember the names of today. But the revolution part of the dot-com period also gave birth to giant companies such as Facebook, Google and Amazon. Right now, history is repeating itself with a new game of survival-of-the-fittest, but this time in the arena of fintech. It seems to be affecting most companies involved in banking, insurance and financial transactions, says newly appointed Endowed Professor in Digitalization at CBS, Robert Kauffman.

"I was researching dot-coms from 1995 to 2001 before the market bubble happened. The dot-com revolution was important in its time. It took advantage of new technologies that we still see deployed in many industries and societies. We are seeing the same thing today, but this time with a fintech revolution. Once again, new technological innovations are creating historical business process and market disruptions, which are transforming the global landscape of the financial industry," says Kauffman.

He joined CBS recently as an endowed professor specializing in digitalization. He came from Singapore Management University where he has been part of the management and professor. His career started in the early eighties in international banking at Irving Trust Company in New York. After several years working on Wall Street, he gained a foothold in the academic world. Kauffman has worked at or been associated with several university business schools, such as the Stern School of Business, the Carlson School of Management, the W. P. Carey School of Business and Tuck School of Business. Over the years, he has been involved in researching the area of information systems, financial services, technology, airline competition and online travel agents, data analytics for consumer marketing, future money, technology investments and strategy.

In the middle of the fintech revolution
His current "keen interest" is the game change in fintech and financial services created from innovation in technologies and data analytics methods, such as machine learning and the horsepower of “smart systems” approaches, cloud computing and artificial intelligence. Kauffman doesn't hesitate to call it a "revolution", also pinpointing this as the reason why it is so interesting as a researcher to observe the financial industry close up now.

"We are probably in the middle of the fintech revolution in advanced economies like those in Europe. The high-tech developments of today are extraordinary and have been speeding up the innovation process. A lot of things are changing around us in the industries of banking, market investments, remittances and related industries, and some of the large companies out there don’t have sufficiently knowledgeable human resources to manage and implement technology innovations so they can stay abreast of or get ahead of the market," says Kauffman and continues:

"For example, in the future there cannot be as many banks as we see today. Technology is the main agent to drive competition with a new set of basics and facts, and not all financial institutions will be able to develop the technology needed to make them attractive to consumers. It is also difficult for bankers to compete directly on financial transactions. Most will need to be on new platforms that bring many services together to benefit consumers. This sort of change is happening in areas such as P2P (person-to-person) payments and lending, remittances without foreign exchange transactions, and faster payments settlement."

Too early to put all the chips on the table
Robert Kauffman is associated with the Department of Digitalization at CBS, a couple months into his new job, and still in the process of settling into life in Copenhagen with his wife and his responsibilities at work.

"CBS is a much bigger place than Singapore Management University where I worked for the past 9 years. There are a lot more people, more programmes, more colleagues. It seems there is a lot more going on. With size comes opportunity and here at DIGI, people are going in really interesting directions that I'm only beginning to get a taste of," says Kauffman.

For the same reason, he has not decided on specific research projects yet. "It is too early to put all my chips on the table", as he phrases it. But apart from the fintech revolution, there are a few subjects he is currently interested in. For example: digital entertainment, the management and marketing of services subject to revenue yield management, how social sentiment affects trading equities, and not the least, future money and the neighbour of Copenhagen, Sweden may be en route to a cash-free society in a few years, with the Swedish central bank, Riksbanken, investigating the option of a launch of a digital currency called an e-krona.

"What can look like an opportunity for some, can look like a pit of danger for others”, says CBS' newly Endowed Professor in Digitalization, Robert Kauffman.

For more information contact Mikael Koldby or Department of Digitalization.


What is fintech?
Fintech is an abbrevation of financial technologies. According to the online dictionary Merriam-Webster, the term covers: "products and companies that employ newly developed digital and online technologies in the banking and financial services industries".