A century with CBS – the fighter that succeeded

Internationally renowned, and with almost 22,000 students, CBS is celebrating its centennial anniversary. Its success, however, did not come without a fight. Financial constraints and an ongoing struggle for academic recognition have threatened to put an end to the school’s ambitions in the past. CBS’s entire history unfolds in a new anniversary book.

Copenhagen Business School is hard to overlook, when walking through Frederiksberg. Its campus extends from the main square, Solbjerg Plads, past buildings such as Kilen and the former Royal Porcelain Factory, Porcelænshaven, to the characteristically white buildings of Dalgas Have on Dalgas Boulevard. The buildings provide the backdrop of daily life for CBS’ almost 22,000 students and approximately 2,000 employees.

The school’s humble beginnings date back to 1917, when Købmandsskolens Handelshøjskoleafdeling, or the Commercial School’s Business College, which is what CBS was called at the time, opened its doors for its first series of lectures in a side wing of the Commercial School.

At the time, advanced commercial training had long been on the wish list of the business community but resistance from both the University of Copenhagen and the Ministry of Foreign Affairs made it almost impossible to establish a university level programme in commercial science.

FUHU founds CBS
As a result the Danish Society for the Advancement of Business Education and Research (now known as FUHU) went its own way. Its lecture series launched the institution that has since grown to become an internationally recognised business school that, year after year, delivers sought-after graduates, particularly by Danish business and industry.

“Over the past century CBS has undergone an academic and educational development that has resulted in the continuous improvement of the quality and skills of its graduates. Confrontations with the business community have arisen along the way, with the school being viewed as too academic, too theoretical and unworldly, but this does not change the enduring recognition business and industry offers CBS graduates,” explains Kurt Jacobsen, professor at the Department of Management, Philosophy and Politics.

Jacobsen and Anders Ravn Sørensen, also from the Department of Management, Philosophy and Politics, had free reign for two years to write the history of CBS. The end result is the book, CBS 100 Years, which has just been published. 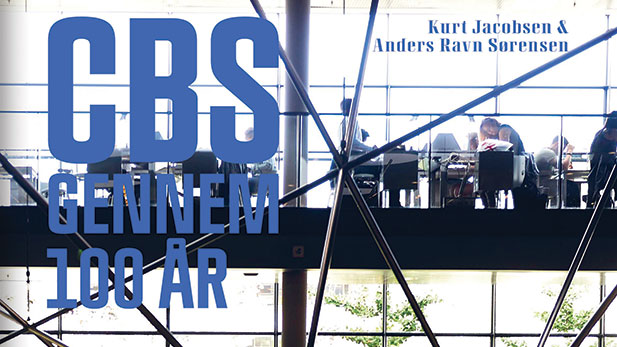 Academic ambitions and financial hardship
Jacobsen and Ravn Sørensen unreservedly describe the history of CBS as a success story. But CBS did not become the CBS that we know today without bumps and obstacles along the way.

Ambition was there from the beginning. The desire was to educate for the benefit of business and industry, but also to enhance the academic legitimacy of the enterprise.

A major academic milestone was reached in 1936 when the first professor finally crossed the threshold, but not without opposition. And, once again, it was especially the University of Copenhagen and the Ministry of Foreign Affairs that attempted to stand in the way. From 1945 to 1965 efforts were made to upgrade the academic side of the school and the number of professors grew at a measured pace.

This academic development, however, hit a major obstacle.

“CBS has always been ambitious about becoming stronger, purely academically, but when serious steps were being taken in the late 1960s, the VKR government (comprised of the Radical Left, Conservative People’s Party and Denmark’s Liberal Party) axed spending, effectively shutting down the hiring of more professors,” clarifies Ravn Sørensen.

The VKR government’s demands for cuts in expenditures were the start of several years during which it became increasingly difficult to make ends meet financially, resulting in a serious slowdown of academic development. In the 1970s and 1980s, the number of professors grew only incrementally. This period, in other words, broke the academic progress that has otherwise been a hallmark of the history of CBS.

“CBS earned a reputation as an educational institution with many part-time lecturers and relatively few professors, which affected the allocation of research funding to CBS and continues to shape CBS to this day. The number of professors only seriously began to increase again in the late 1990s,” explains Ravn Sørensen. 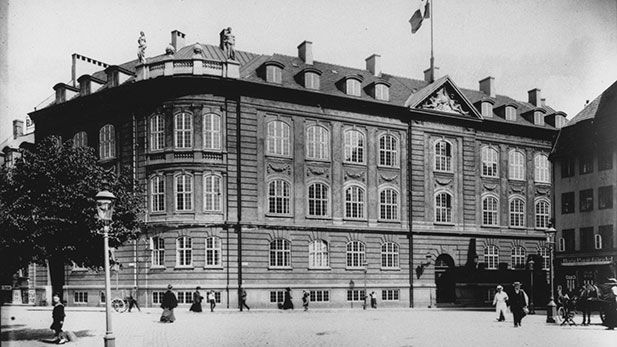 The building occupied by Købmandsskolen on the corner of Fiolstræde and Nørre Voldgade in the heart of Copenhagen. 1917 saw the first classes taught at Handelshøjskolen in an annex of this building (photo: CBS).

Fighting for academic breadth
The book also describes the conflicts that arose concerning the legitimacy of teaching languages at CBS and that especially played out in the 1960s, as illustrated by a concrete proposal to completely remove languages from the business school’s curriculum.
“Business economics was simply seen as a science and languages as learning,” says Jacobsen about the conflict.

Instead of dropping languages, however, things ended up moving in the other direction. A master’s degree in languages was established and language professors were hired. Retaining languages and establishing SPRØK, a languages and business administration programme, in particular, along with other combined programmes, sowed the seeds for the academic diversity that flourished during Finn Junge Jensen’s tenure as president, which remains a trademark of CBS, according to Ravn Sørensen.

“Interdisciplinary degrees expanded not only what was a limited selection of programmes but also the notion of what higher-level business training in Denmark could comprise. This is why the establishment of SPRØK and the other combined programmes was a major milestone in the history of CBS,” asserts Ravn Sørensen. 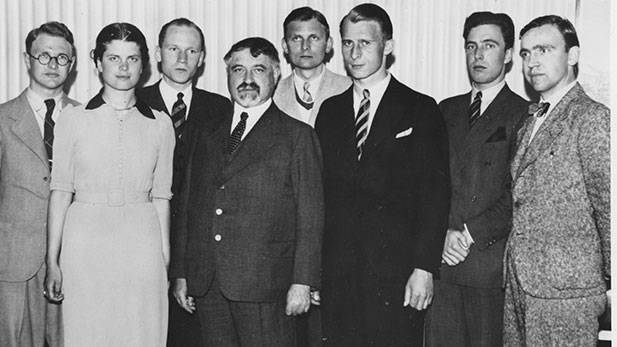 In 1936, Julius Hirsch (no. 4 from left) was the first to hold a professorship at Handelshøjskolen. In this picture from the late 1930s he is in the company of a group of students (photo: CBS).

Regardless of the resistance and confrontations that have threatened to put an end to CBS’ development, the school has continued to expand. And that’s what is so admirable about CBS’ history, according to the two authors.

“The fact that the business community was able to create a research and educational institution like CBS from scratch and elevate it to such a high academic level that, in 1965 when it became self-governing, it immediately had the right to award doctoral degrees. To me, that’s one of the most impressive and surprising aspects of CBS’ history,” comments Jacobsen.

If you have any questions, please contact Kurt Jacobsen or Anders Ravn Sørensen.