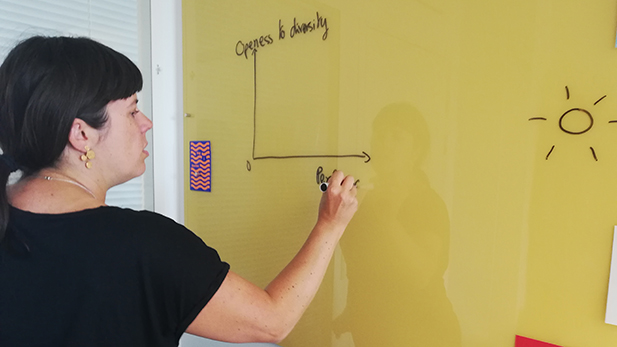 Here you see researcher Florence Villeséche drawing a graph to describe the correlation between gender balance, openness to diversity and performance.

How does work culture and gender balance impact our work performance?

Associate Professor Florence Villesèche from the Department of Management, Politics and Philosophy at CBS seeks to answer this question among others in a new peer-reviewed study.

Together with Professor Jakob Lauring from Aarhus University, she has collected data from more than 1,000 academic leaders from universities in Denmark, Sweden, Norway, Finland and Holland.

In questionnaires, the leaders were asked to provide information about the gender balance in their teams as well as to rate the openness towards diversity and work performance of their teams.

“Our results show that openness towards diversity is positively related to team performance and that this relation is strongest in teams that are closest to a 50/50 gender balance,” says Florence Villesèche.

The leaders in the study were asked to rate their teams in terms of elements such as general performance, quality of assignments, the ability to meet deadlines, and the ability to have good relations with colleagues.

The leaders rated their teams’ openness towards diversity by rating their openness, willingness to listen and learn from colleagues with different work values or motivations.

After analysing the answers and relating them to the number of women vs. men in each team, the researchers concluded that teams with an even gender balance in fact is strengthening the positive correlation between openness and the general team performance from an average of 0.146 to 0.26,1 which amounts to a 78 percent increase.

However, if the gender balance is 20/80, the positive correlation between performance and openness decreases around 33%.

This means that teams with a more balanced gender composition are more likely to reap the benefits of openness to diversity but also that the open attitude is still something that has a positive impact on performance, regardless of team composition.

So it’s really all about having both the work culture and the balance in place, Florence Villesèche explains:

“More women in a team does not mechanically affect the performance as has been argued in the past. Instead, the openness to diversity and gender balance in the team is key. This means that teams consisting of 90 percent women and 10 percent men do not perform as well as teams with a 50/50 balance. So it’s not a question of simply bringing more women into these teams, it’s about work climate, culture, and balance” she says.

Challenges the stereotypical perception of women

The result of the study challenges some people’s stereotypical perception of the relation between gender diversity and team performance.

“We would like to go beyond the discussion of ‘we need more women in leading, intellectually demanding positions or not’ and broaden the debate. Women are not a homogenous mass or magical fairies who have the ability to improve the environment in a workspace or directly impact the bottom line regardless of context,” she says.

Fortunately, most companies today increasingly consist of a mix between men and women, so it is important that we work on our perception of how gender diversity affects the dynamics and performance of a team and under which conditions, Florence Villesèche says.

Still, she emphasises the enduring inequality problems with regards to equal pay, promotions and few women in leading positions.

“Other than these prevalent issues, there is a tendency towards, for example, men being doctors and women being nurses. We are still affected by some normative understandings of male and female jobs and what the hierarchy is between them, which we have to try to get rid of,” she says.

Leaders should encourage employees to think outside the box

Even though the study is based on questionnaires with academic leaders at universities, parallels can be drawn to other workplaces where knowledge-intensive work takes place, Florence Villesèche says.

Leaders in public and private companies should consider how to ensure the best possible working conditions to increase team performance:

“One of the ways to do that is to consider the gender balance in your teams. It would be even better to simultaneously consider how to foster a work culture were employees have an open attitude towards other people’s ideas, as this could mean a lot for the overall performance,” Florence Villesèche explains.

In addition to that, you have to remember to let your employees take risks based on diverse input and think outside the box:

“Often, the new and groundbreaking ideas emerge when we go out of our comfort zone and aren’t sure what will happen next,” she ends.