Trends and challenges in the maritime industry mean that enhancing the skillsets of executives and aspiring leaders must be a priority. 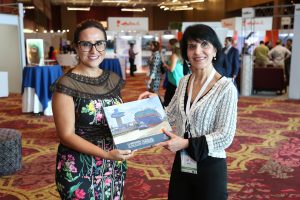 Trends and challenges in the maritime industry mean that enhancing the skillsets of executives and aspiring leaders must be a priority.

This was the message Irene Rosberg, programme Director of the Blue MBA - Executive MBA in Shipping & Logistics at Copenhagen Business School ­ said, when she addressed the Panama Maritime Conference XIII. Regional and international market leaders attended the conference and exhibition, which is a biennial event. Ms Rosberg detailed the dramatic roster of issues the industry had to face. In all of them, there was a strong component of the human element, a fact which highlighted the need to invest in the skillsets of people
working in the industry, including at the top levels.

She said that high on the agenda was big data, which alongside its benefits posed the requirement to protect sensitive information from the wiles of cyber-criminals. Technological innovation demanded specific skills if it were to be applied successfully. Different segments of the shipping industry (container, dry bulk, tanker) were fraught with both their individual problems and common concerns. Specific attention would need to be given to the capability of port infrastructure to handle the new generations of mega-ships.

A strategic approach was urgently needed in fulfilling the requirements of the IMO convention on ballast water management. The cost for shipowners of acquiring equipment to meet the requirements was potentially enormous. Even though the convention is coming to force this year there seemed to be a lack of harmonisation in the technology used as well as inconsistency in reporting systems, said Ms Rosberg. Further dilemmas were thrown up by moves to use LNG as a propulsion fuel. The main obstacles to be tackled in adoption of the system related to the bunkering process and technical equipment.

The conference, in March at the Megapolis Convention Centre, celebrated the centenary of the Panamanian ship registry, the world¹s largest, and the recent Inauguration of new locks for the Panama Canal. It was organised by the Panama Maritime Chamber and the Panama Maritime Lawyers Association (Apademar). Organising committee president was Flor de Maria Torrijos, a reinsurance broker and maritime lawyer recognised by Forbes Latam as one of the 14 most influential people in the Latin American maritime market.