Copenhagen MBA class of 2018 graduates: “Every single one of you made me a better person”

On Saturday 18 August 2018, Ovnhallen was brimming with excitement as the Copenhagen MBA class of 2018 took to the stage to receive their well-deserved diplomas.

Copenhagen MBA class of 2018 graduates: “Every single one of you made me a better person” 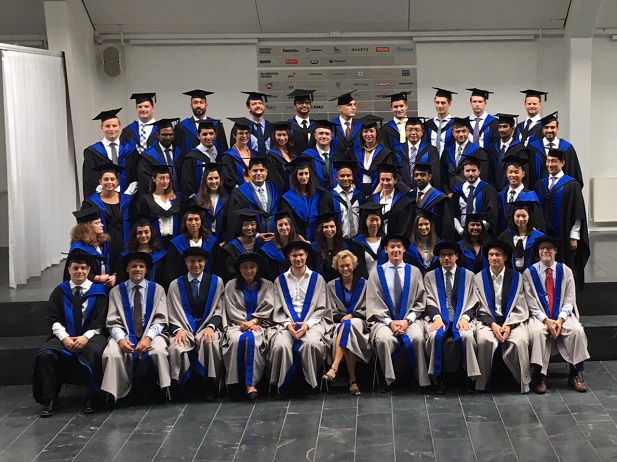 The Copenhagen MBA class of 2018 and their academic guides, captured minutes before the throwing-of-the-hats.

On Saturday 18 August 2018, Ovnhallen was brimming with excitement as the Copenhagen MBA class of 2018 took to the stage to receive their well-deserved diplomas. The sense of achievement in the air was palpable as the MBA year came to an end, culminating in this long-awaited celebration with family and friends.

Since the MBA class is the epitome of diversity, the Copenhagen MBA Associate Dean Birthe Larsen took the opportunity to point out how much better companies perform with a diverse work force, before inviting the Student with the Highest GPA to collect her award. Helen Gaffney snatched this spot, having achieved a jaw-dropping 11.7 average (on a 12-point-scale).

Next, it was time for CBS Dean of Education Gregor Halff to recognise the lecturer voted Teacher of the Year by the class. It went to Jeppe Christoffersen, teacher of Financial Statement Analysis, for going out of his way to ensure the class mastered a tough topic.

Wayne Yang was voted Student of the Year by his classmates. Reflecting upon his nomination in the accompanying speech, he said:

“This award belongs to all of us. Every one of you had opened up and shared a little bit of you with me. Every single one of you made me a better person and I hope I made you better, too. Our paths will divert after graduation but we will bring forth the best in us and make a difference.”

Next, it was time for the Leadership Award that went to Simon Kristensen for having a remarkable ability to make people feel at ease and empowering people instead of exercising power. In his thank you speech, Simon admitted to joining the MBA to learn what leadership is and that the diverse group of people that was his classmates had revealed it.

“Having worked together with these brilliant students, that showed such great leadership by helping each other out day and night, it became apparent: They had showed me that they know what leadership is already. Giving other people success is the key.”

As the ceremony drew to an end, MBA Director Poul Hedegaard reminded the graduates that out there in the real world, there is no core curriculum and that everything is a big elective.

“You are all resourceful and will get big jobs; some will create big companies. And with that comes big responsibilities.”

Dean Gregor Halff pointed out to the students that as MBA graduates, they are now brand ambassadors for the school.

“The CBS brand tattoo will not go away. Take the right decision. Just as we are proud of you, we hope you are proud of us!”