The Platform's participation at the Danish Political Festival Folkemødet 2014

Debating the Public-Private agenda at Folkemødet

Debating the Public-Private agenda at Folkemødet

-The Platform's participation at the Danish Political Festival Folkemødet 2014

In june the Platform participated once again at the Danish People Meeting and Political Festival ‘Folkemødet’.

Folkemødet is a yearly four day event taking place at the Danish island Bornholm where politicians, researchers, public servants, private organisations and the civil society meet and discuss the issues on the current political agenda. Thus, the aim of the Platform’s engagement was to debate the Public-Private agenda, to engage in interesting dialogues with existing and/or future collaborators and not least to increase the awareness of the important societal solutions addressed through PPPs.

Among the activities at this year’s festival the Platform hosted, as last year together with the Confederation of Danish Industry and the Danish Competition and Consumer Authority, an event on PPP. With the title ‘From Welfare to Export’, this year’s event asked how and if we by export can earn money on the Danish Welfare System? A unique demand for knowledge on the Danish model and solutions is raised from abroad—but which potentials do actually exist and how does the Public-Private agenda meet these potentials? 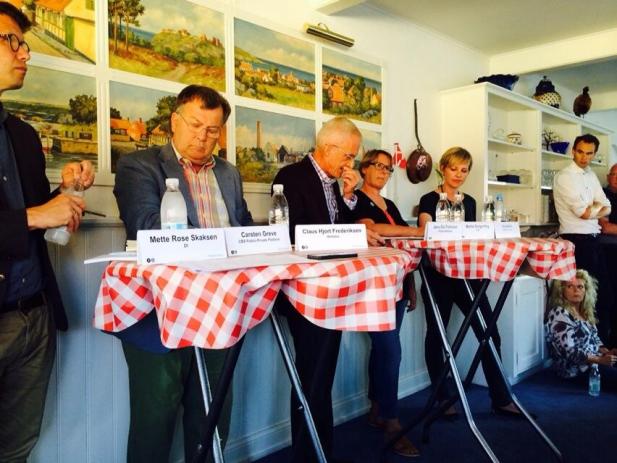 Members of the panel were: current spokesperson for the the Danish Social-Liberal Party and former Minister, Ida Auken, and member of parliament for the Danish LiberalParty and former Minister, Claus Hjort Frederiksen. Chairman of FTF, Bente Sorgenfrey, and Jens Ole Pedersen from Philips Healthcare. Academic Director, Carsten Greve, participated in the panel as PPP expert and provided factual and research based insights to the others‘ discussion on the opportunities for Danish welfare exports. Tine Roed, Director of the Confederation of DI welcomed and Mette Rose Skaksen, Branch Director of the Confederation moderated the event.

Journalists from the news agency Altinget followed the event and published following a long article. Find it here.

An Argument for a Legislation on Public-Private Partnerships

The focal point for the Platform at this year’s festival, was to emphasize the importance of the need for a formal legislation for Public-Private Partnerships in Denmark. Carsten Greve is working on this aim together with Professor Christina Tvarnø. Greve elaborates:

“A PPP law will help collect all the many different rules in one place. It is an advantage for the ministries, because it can provide an overview and because
the arguments for PPPs can appear together. It is advantageous for businesses because they can get strong and stable market conditions. The law can create a
"pipeline" of projects in the future. Finally, with a PPP law politicians will be able to send a strong signal to the market that they are supportive and that the
interest in PPPs actually exists. Inspiration from countries with PPP legislation can be found in OECD. According to Cornell University researcher, Rick Geddes,
more than 30 states in the U.S. have proven successful experience with PPP legislation.”

In the article ‘Here is the American OPP-model’ the news agency Altinget have interviewed Greve for an in-depth presentation of his suggestion.

During the festival Carsten Greve presented the idea of a PPP law in several connections. Both at our own event where it received great support from Ida Auken and not least Bente Sorgenfrey who in accordance suggested a datingsite for public-private partnerships facilitated by the government. Greve also asked Henrik Sass Larsen, Danish Minister of Business and Growth and Bjarne Corydon, Danish Minister of Finance, how they related to the possibilities of public-private partnerships. Sass Larsen declared his support, as long as it did not imply privatisation. Corydon declared he was open to PPP, but didn’t want to see it as a magic bullet to solve all investment challenges for the public sector. Both politicians implicit supported the need for thorough framework for PPP, to enhance the possibilities identified in the model.

Read more about the debates at Carsten’s twitter profile, or find arguments at his recent blog post on ‘5 ways to support PPP in Denmark’ here.