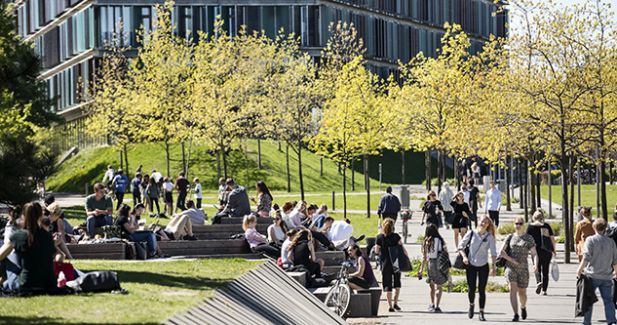 As a response to years of offensive behaviour taking place at intro camps for new students, CBS tightened the rules for intro activities in 2016. According to the current rules, all kinds of activities demanding or encouraging students to consume alcohol are prohibited. In addition, students are not allowed to drink beer before 17:00 on campus or at intro camps, just as any kind of hard liquor is prohibited at any time during the intro. Students who sign up as intro guides for new students are meticulously taken through the rules for intro activities in a course, and are required to sign these rules.

- Having to temporarily suspend a large group of students for violating CBS’ rules for intro activities is not only regrettable, it is also deeply disappointing. Our rules are quite clear. Our intro guides have undertaken to comply with our rules and yet violated them, and we can do nothing other than react to this, says Nikolaj Malchow-Møller, President of CBS.

More cases to come
The temporary suspension of 25 students applies to 1-2 exam periods and is the result of consultations with a total of 53 students. The cases CBS has just processed are related to this year’s study start where intro camp attendees have reported violations of the rules in terms of alcohol and unacceptable behaviour. After these cases were settled, reviews of all student evaluations of the intro activities have revealed additional problems. Consequently, we will send letters of consultation to an additional 44 intro guides, however, as these cases are still pending, a decision is expected to take place in January.

- We know that getting off to a good start at university is essential to our students’ well-being and academic life. For this reason, it is vital that our intro activities are inclusive for all students and focus on academic as well as social aspects. Neither offensive behaviour nor large amounts of alcohol belong there, says Nikolaj Malchow-Møller.

Intro camps to be taken up for discussion
As a consequence of this year’s many violations, especially at the intro camps, the general intro activities are now undergoing a thorough overhaul. In collaboration with CBS’ students, Senior Management has initiated a process to develop a new intro concept where the aim is to avoid cases resulting in the suspension of students. The concept will be introduced at the study start in August 2020.

FACTS ABOUT INTRO 2019
2803 students on 18 bachelor programmes went through a two-week orientation period in August and September with 369 intro guides.

Copenhagen Business School's rules and regulations on academic conduct, including penalties (in Danish)

Rules for ethical behaviour in relation to intro activities (in Danish)

The document to be signed by intro guides