The Carlsberg Foundation was established by Brewer J.C. Jacobsen in 1876, and thus, it is one of the oldest commercial foundations in the world.

A big part of the Carlsberg Foundation’s work lies in supporting basic research in the humanities as well as the social and natural sciences in Denmark.

In addition to the focus on basic research, the Carlsberg Foundation attaches great importance to the support of talent development and the generational change in basic research in Denmark, the internationalisation of Danish talents as well as visionary, ground-breaking trends in research.

Read more about the foundation and its history here. 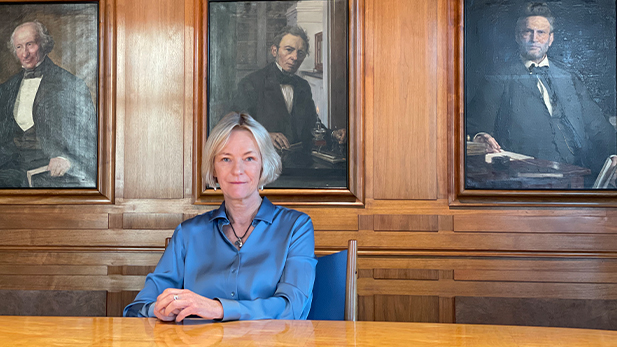 On the ground floor of the old palace on H.C. Andersens Boulevard where the Carlsberg Foundation is domiciled, you can see a row of portraits; all of the foundation’s former chairmen. They are all professors and all of them are men.

However, there is a wind of change in the 146-year-old foundation; one of the world’s oldest commercial foundations whose purpose is to advance and support research in the humanities as wells as the natural and social sciences. Because the board has appointed Majken Schultz as new chairwoman. She is a professor at the Department of Organization at Copenhagen Business School and moreover, she is one of the few Danish women whose CV includes a number of major directorships.

“When I joined the Carlsberg Foundation’s board in 2019, it was not to become chairwoman but because I am enthusiastic about research and believe I have something to offer,” she responds when asked why she accepted the position.

For many years, her career has been two-fold. In 1988, she wrote her PhD thesis at Copenhagen Business School, and she has been an active researcher since then. Concurrently, she has also had a successful career as a board member of several companies, the most recent being Bang & Olufsen and Danish Crown. She will also continue as Vice Chairwoman of Realdania until spring 2023.

With a heart set on research and a keen professional eye for branding, strategy and management, it seems obvious Majken Schultz would end up in a position that connects academia with the business community.

I guess there is only one position in Denmark that connects these two worlds and that is the chairperson of the Carlsberg Foundation because it is linked to research and also linked to Carlsberg A/S. In that respect, this was a truly unique opportunity,” she explains, referring to the fact that as of March 2022 she expects to take on the position as Vice Chairwoman of the Carlsberg A/S board.

And yet, it was not an easy decision to make.

“The hard part is the responsibility. It is a huge responsibility and at the age of 63 I could easily begin to slow down and rest on my laurels because I have done quite well. I had to consider whether I would have the energy to contribute what it takes and I believe I do.”

Back then, CBS was not particularly prestigious. It was a small organisation – a commercial college that no one at UCPH thought highly of. So it was not an obvious career choice but I thought it was exciting because of the subjects I had studied. Since then, CBS has become an important part of me.

At the age of 38, she became the first professor at the Department for Intercultural Communication and Management and continued her research in the intersection between business identity and corporate branding. During the past five years, she has been affiliated with the Centre for Organization and Time and is also the principal investigator of a huge research project financed by Novo Nordisk Fonden in which they examine how companies work with long-term climate goals. Therefore, her new position as chairwoman is not a farewell to research. She will continue both her research and her teaching activities at Copenhagen Business School but not full time.

Growing pains at the foundation
Appointing Majken Schultz as chairwoman is in many ways also a manifestation of the winds of change in the Carlsberg Foundation which will be undergoing sweeping changes in the years to come. This is a consequence of the foundation’s greatly increased capacity for awarding funds. Majken Schultz estimates that within a few years, the foundation will be able to award DKK 750m as opposed to the approximately DKK 200 million it previously awarded.

Among other things, the new initiatives will result in the board no longer being the sole judge of incoming applications. The new board is currently in the process of discussing how a new judging system should be developed for bigger projects. Furthermore, they wish to appoint a director of the Carlsberg Foundation as well as a deputy chair.

In addition to the activities directly related to the foundation, various big projects are in the pipeline. Among other things, they have just refurbished Brewer J.C. Jacobsen’s old villa in Valby, which has served as a meeting place for the Danish research environment since the 1990s, and which they now wish to activate to a greater extent.

When asked which key issues she is particularly passionate about, Majken Schultz mentions the importance of independent basic research. Thereby, she also addresses a great deal of the criticism directed at private foundations. Many people believe that private foundations favour a few specific research areas as several foundations award the majority of their funds to medical and natural sciences.

“At a time with an enormous focus on themed research and where every management must find their theme, I believe that it is crucial that researchers maintain the right of initiative. And I am convinced that the researchers will ensure that we renew ourselves. I can tell by looking at the applications we receive.”

Carlsberg’s women
As a young woman in the world of research, Majken Schultz did not have many female role models.

When I was a young researcher, only one woman was ever mentioned in the corporate world in Denmark, and that was Bodil Nyboe Andersen, Governor of the National Bank of Denmark. Then there was Stine Bosse. Clearly, there are more women now but there are still very few female role models for young aspiring women to look up to. We have seen a little more female role models in international research but they can seem very unobtainable.

For this reason, Majken Schultz also believes that it is important to highlight that right now there are women at the helm of all three of the Carlsberg family’s foundations. In 2020, Christine Buhl Andersen became Chairwoman of the New Carlsberg Foundation while the Chairwoman of the Tuborg Foundation is Adjunct Professor at Copenhagen Business School Anne-Marie Skov. Only five years ago all three foundations were headed by men.

She is highly aware that in the world of research there is a tendency to bypass women. This is also why securing gender equality is an important part of the Carlsberg Foundation’s strategy by way of initiatives such as covering parental leave and judging applicants more qualitatively rather than on the number of publications and citations. In addition to these concrete initiatives, Majken Schultz is very focused on being a role model for other women.

“I know how many incredibly gifted female students I have. Also women who are not Danish. Who can they see themselves in? In some ways, I show them that it is possible to get far and that you do not have to lose yourself along the way.”

Therefore, she is on a small mission to unearth the many women in Carlsberg’s history and shine a light on their importance.

“J.C. Jacobsen and Carl Jacobsen were, as many are well aware, the men behind Carlsberg. However, they were not alone. Their wives, Laura and Ottilia, helped build the brewery and without them Carlsberg might not have existed. Not many people know that. I believe that it is time to focus more on the women.”


Read more about Majken Schultz and her research here.