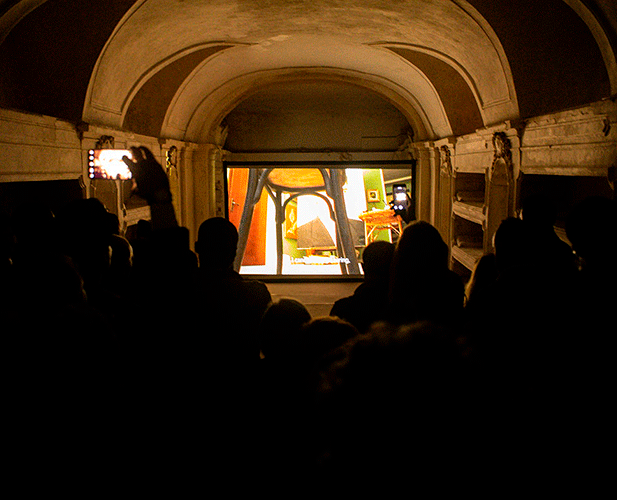 With new technologies flooding all areas of society, many people are expressing the desire to have a more democratically based approach to the digital transformation. Together with universities and art-related organisations in eight other countries, CBS is participating in the research project entitled Artsformation, which explores how, with the aid of artistic working methods and via an experimental approach using art as a tool, we can study and articulate the challenges that technology brings. This approach contributes to a future in which digital solutions are developed and designed in way that makes them more inclusive of people.

The world is currently undergoing a massive digital transformation, sweeping across all areas of society and life, in many cases offering attractive opportunities in business and in our private lives. Technology, however, also poses new threats and challenges. This applies, for instance in relation to the trail of data that we increasingly leave behind, the data collected and utilised without our being aware of how. Many people express the desire that in the future the digital transformation will be far more democratically founded than is the case today.

This is why CBS has joined forces with universities and art-related partners from England, Germany, France, Greece, Italy. the Netherlands, Ireland, and Norway in a research project funded by the European Union called Artsformation, which began in 2020 and will run until summer 2023. Through an experimental approach using art as a tool, Artsformation explores the role that art and artists can potentially play in addressing the challenges of technology and in creating a future in which digital solutions are developed and designed in ways that make them more inclusive of people.

“In brief we’re trying to provide answers to how the approach that art and artists have to the world can grasp the subtleties of the various perspectives on the digital transformation – both in terms of dystopian perspectives and those that glorify it,” explains postdoc Kirsti Reitan Andersen from the Department of Management, Society and Communication at CBS. Together with Ana Alacovska, an associate professor in the same department, she oversees the Danish contribution to Artsformation.

Andersen emphasises that Artsformation is part of a larger movement investigating and experimenting with how art and artists can contribute to the development of society on a concrete level. Specifically, Artsformation attempts to uncover how art that goes beyond the traditional roles of being decorative, entertaining or provocative can contribute to increased democratisation in the transformation. What exactly can art and artists do that is so unique?

“In recent times art has traditionally questioned existing conditions, potentially making it an eye-opener and a channel for new thinking. In the digital transformation, art can provide an ethical space for reflection at the intersection between human beings, the world and technology – which is why artistic working methods and ways of thinking increasingly contribute to innovation in all possible areas of society,” she adds. 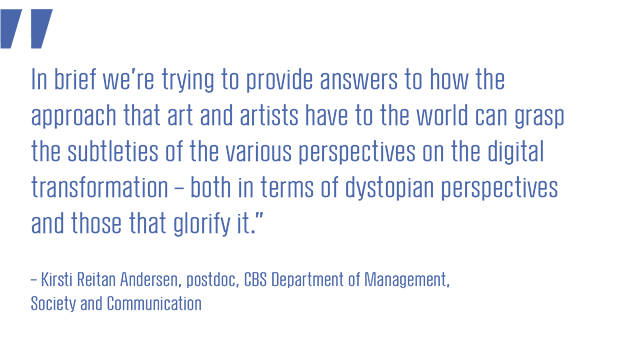 An increasingly classic example of how art can express the challenges of technology in new ways so that it becomes intelligible and relatable to many people is the Random Darknet Shopper experiment that ran from 2014 to 2016. A group of artists set up an automated online shopping bot with artificial intelligence that went shopping in the deep web randomly purchasing items that were mailed directly to an exhibition space, where they were displayed. The bot was subsequently taken to court because it had purchased illegal drugs.

The digital transformation brings a large assortment of challenges with it, emphasises Andersen. For instance, there is a large number of senior citizens in the European Union who do not have access to the internet. A weak or absent internet connection in some areas also makes it difficult or impossible to interact with, for example the public authorities. It has also created problems in terms of educating children and young people during the COVID-19 crisis, when schools have been physically closed.

In addition Artsformation takes a closer look at gender and skills-related imbalances in the digital transformation and, in that regard, works with the Catch – Center for Art, Design and Technology, which was established to promote innovative development and education in Elsinore, where it is located.

Catch was the prime mover for various workshops in spring 2021 with the artists Mirabelle Jones from the United States and Julie Østergaard from Denmark. Jones is inspired by ground-breaking science fiction written by women, people of colour and transgender people whose works typically differ thematically from more traditional science fiction written mainly by and for white men. The Catch workshops shed light on various gender-related biases in the digital transformation. One workshop dealt with content on Wikipedia, where only about 15 percent of those editing Wikipedia are women and where around 18 percent of the biographies in the English version are on women. Workshop participants learned to create and edit Wikipedia profiles.

Artsformation also takes a closer look at socially engaged art, placing the artistic process itself in focus. The artist works, for example with vulnerable groups, who through their involvement gain new skills and thus a real voice and opportunity for participation. This is also the case in another specific Catch project that Artsformation will follow in autumn 2021.

“Artist Jakob Tækker will collaborate with a group of unemployed young people from the local area to develop and design the city’s new job centre. A key aspect of the project is the job centre’s use of technology in relation to people in the community. Along the way, the young people will gain deeper insight into the technologies and their use. Against this background, the idea is that they will be able to be more critical of the technologies and at the same time use their newly acquired digital skills in their future job search,” explains Andersen.

Artsformation also focuses on artists establishing companies. For instance Olafur Eliasson, who from his base in Berlin created a company that designs, produces and sells inexpensive solar-powered lamps to poor rural areas without access to electricity. The entire process from design to use stems from artistically driven innovation, and the company holds regular workshops designed to inspire others to do something similar.

Artsformation also led to a collaboration to establish the School of Aesthetics and Technology (SÆT), of which Andersen is a co-initiator together with Catch, ARKEN Museum of Modern Art, lecturer Jesper Balslev at Copenhagen School of Design and Technology and Fablab at Roskilde University. SÆT’s purpose is to contribute to a more inclusive digital future – with artistic practice as a driving force – by developing new teaching formats and specific teaching materials to inspire users’ consideration of existing technologies in new ways and to anticipate future technologies.

The kick-off for SÆT, which is intended as an online platform but with a physical presence, is a summer school this August that will gather technology people and artists together to develop the school’s initial bid at teaching materials that will be open source and thus freely available to all interested parties. Artsformation will use SÆT as a case study while simultaneously contributing to the ongoing development of the school’s activities.

According to Andersen the Artsformation research project has already found that an innovative approach based on artistic practice often leads to reflection at a completely different level than people are used to – especially in relation to proposing what new technology can and must do.

“I think that the explanation is to be found in the artistically free space where questions can be asked without having concrete answers on hand – and where being open minded, playful, willing to explore and willing to test boundaries can open new doors,” highlights Andersen, adding that Artsformation will involve and fund a large number of artists in the project to gain deeper insight into artistic processes and what they can contribute. The aim is also to create an artist network that can live on in the future.

Artsformation regularly publishes results from sub-reports and video documentation, just as the project will disseminate new insights at festivals and exhibitions, including at the annual Transmediale festival for art and digital culture in Berlin, Germany.

Stay up to date on Artsformation’s assorted activities and download project reports.

Read more about the School of Aesthetics and Technology.

Please do not hesitate to contact the project coordinators at CBS: