On the occasion of CBS’ centenary in 2017, Danish visual artist Michael Kvium has made a new bronze sculpture, which can be experienced in the Kilen atrium from 22 August. 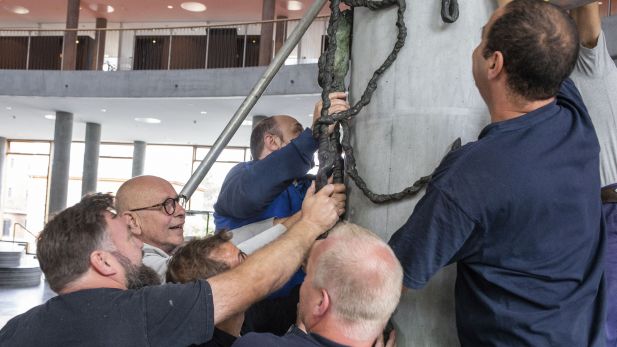 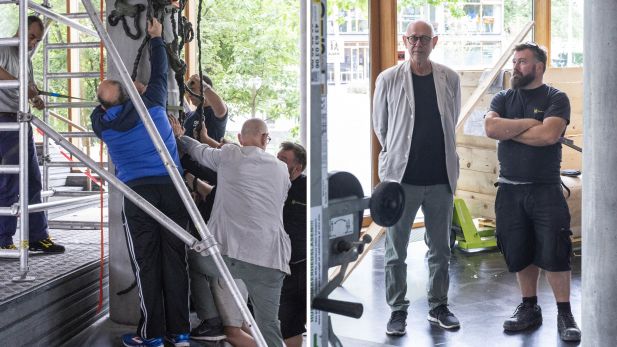 Michael Kvium and his team mount the bronze sculpture at Kilen, CBS. The manufacturing of the sculpture started in the autumn of 2017. It has been cast in Italy. Photographer: Jørn Albertus.

Art has always been prioritised by CBS. Recently, a quite spectacular piece of art has made its way to the collection facilitated by a tireless student; a sculpture by the internationally acclaimed visual artist Michael Kvium.

The sculpture can be experienced in the Kilen atrium at Frederiksberg from 22 August. The bronze sculpture is titled Social Pattern and is a system of bodies moving a few metres down and around a four-metre long concrete pillar.

Kvium describes the sculpture as an “intestine-like” system, and he considers it an expression of an alternative life form:

“The figures can be an indirect reflection of our perception of ourselves and our deeply embedded need to emphasise the difference between “them” and “us”. To some people, the sculpture may create a feeling of being alienated or repulsed, as you will be looking at a system of something that is not recognisable at first sight,” says Michael Kvium.

The sculpture gives rise to reflection
President of CBS and Chairman of the CBS Arts Committee Per Holten-Andersen is excited about the new piece of art:

”It is a tremendous honour that Michael Kvium has made a piece of art for CBS. We wish to make art a more natural part of daily life on campus by integrating art into CBS’ buildings and surroundings. Students, staff and the general public can enjoy this sculpture”, says Per Holten-Andersen.

Trine Bille, Professor and member of the CBS Arts Committee, hopes that the sculpture will inspire people to see new perspectives:

”I expect that the sculpture will make everyone who enters the room pause and reflect in the encounter with the organic and spectacular expression of this sculpture. The sculpture breaks with the usual surroundings, which hopefully will provoke and inspire to see new perspectives”, says Trine Bille.

A student-driven initiative
Christoffer Faurschou, Student and Chairman of the student association CBS Art, has initiated the collaboration with Kvium.

”I am so pleased that CBS is listening to the students and embracing such an initiative. Without the support of CBS, Michaels sculpture would have never become a reality”, says Christoffer Faurschou

Last year, he helped establish a permanent exhibition at Solbjerg Campus dedicated to video art  provided by The Louisiana Museum of Modern Art.

On the occasion of the inauguration of the Kvium sculpture, CBS is showing two video pieces by Kvium in August and September. They come from the exhibition “Cirkus Europa”, which was on ARKEN earlier this year.

The establishment of Michael Kvium’s sculpture has become a reality on the occasion of CBS’ centenary in 2017 and has been supported largely by the Frederiksberg Foundation.