CBS and the Danish Society for Education and Business (DSEB/FUHU) handed out prizes last Friday to honour students and employees at the Prize Winners' Reception. 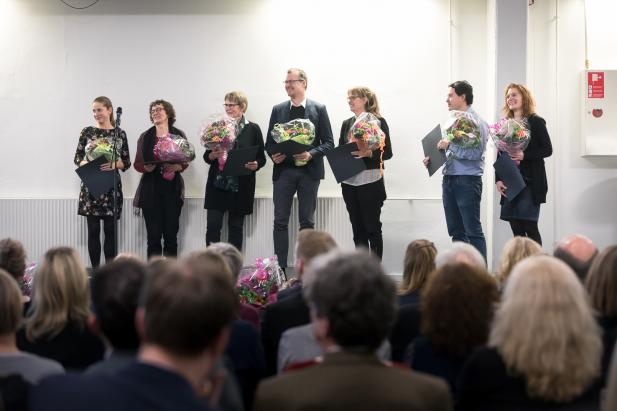 Per Holten-Andersen, President of CBS, welcomed the audience at this year's Prize Winners' Reception and was followed by stand-up comedian Sebastian Dorset, who was quick to warm up the audience.

A panel debate between Thomas Skinnerup, CBS Students, Head of Department Peter Lotz, CBS, Stina Vrang Elias, DEA, and Carolina Magdalene Maier from the Danish political party Alternativet then followed. The debate was about the quality of education at the universities, which is no longer for the few, but for the many.

Surprise award
Among this year's winners is Professor Brooke Harrington, who was presented with a surprise award; the CBS International Citizen Centenary Prize. The prize is awarded to a member of faculty who represents conscientious and responsible intra- and extra-institutional involvement with colleagues, students, the university, the discipline as well as society at large. This involvement constitutes CBS’ social capital, fuelling the various engines of CBS.

With her exposure to the media in the past weeks, Brooke has, according to Per Holten-Andersen, become the symbol of a battle which is being fought by the entire Danish university sector at the moment. The battle is about international researchers' right to work in Denmark under the same conditions as their Danish colleagues - without getting a fine or being reported to the police for being external examiners or disseminating their knowledge to the Danish Folketing.

The following students and employees were presented with an award at the Prize Winners' Reception: