The Politics of Crowds: An Alternative History of Sociology, has just been published by Cambridge University Press:

The Politics of Crowds: An Alternative History of Sociology, by Christian Borch has just been published by Cambridge University Press: 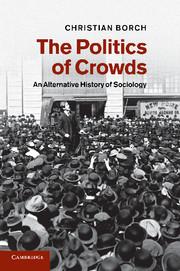 ‘There are over seven billion people on the planet, many of them crammed into cities. The result is that a politics of crowds is not a curio. It is a pivotal means of understanding how we are moved by the world. Christian Borch’s book is the clearest and best guide you could possibly have to the opportunities as well as the risks.’

‘A truly fascinating, learned and deeply thought-provoking reminder of the importance of crowd theory to the discipline of sociology. Politics of Crowds persuasively explains why the “problem of crowds” would have arisen in both the general and the academic culture of the 1880s, threatened to overwhelm the social sciences through the mid-20th century, and then (most fascinating of all) ebbed away again.’