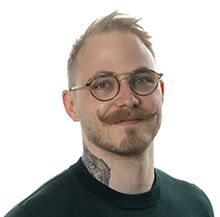 As Theme Lead for Gender and Sexuality in the CBS Diversity and Difference Platform, my research focuses on norm-critical approaches to organising and researching diversity. I have recent years studied conventional work organisations from queer perspectives in collaboration with Danish labour unions, such as Dansk Metal, 3F and PROSA, facilitating research-based workshops that equip union representatives with the right tools for improving the diversity climate in their companies. In addition, I engage with alternative organisations, for example Roskilde Festival, where I explore the phenomenon of transgressive behaviour and test and implement new strategies for creating diverse and inclusive volunteer communities.

Currently, I investigate pride parades and integrative civil religion – a project funded by The Independent Research Fund Denmark. Pride parades that promote lesbian, gay, bisexual, transgender and intersex (LGBTI) rights represent a globally growing sociocultural force. The parades increasingly attract corporate sponsorship. For some, this is a sign of success as the backing of large employers signals mainstream public support. For others, this support signals increased commercialisation which undermines the LGBTI movement’s political and emancipatory edge. The aim of the project is to explore and, potentially, resolve these tensions through an investigation of how pride might form part of a so-called ‘civil religion’, that is, a bond of allegiance based on universal human rights and solidarity among strangers. As such, I tackle the pressing issue of how political and corporate actors may tap into genuine sources of social legitimacy without damaging their authenticity.

In the video below, I give a short introduction to some of my work from a now completed research project titled ‘Co-Creating Gender Equality from Classroom to Organization: Innovations in Welfare Societies’.

I teach a number of different subjects across various courses and study programmes at both bachelor and master level, including:

I supervise student projects from bachelor level to master theses – also internship reports so long as the topic matches my research interests and teaching areas. Among the study programmes that I cover are:

CBS at Pride: ''If you're not honest about who you are, you can't thrive”

That's interesting: ''Good research always has an element of a good cock-and-bull story''