Five new members to join the CBS Board of Directors

A few replacements have been made in the Board. At the end of 2019, four new internal members were elected by employees and students at CBS, while CBS’ appointment committee appointed a new external member.

Do you want to know more about sustainable packaging and green fashion? Read about these and many other topics in our overview of new research from CBS.

We interpret facial expressions based on context

A downturned mouth or bags under the eyes are not the only indicators of a certain mood of another person.

A new study from 2019 by Daniel Barratt, Associate Professor, Department of Management, Society and Communication at CBS and other researchers, context is in fact decisive when we interpret each other’s facial expressions.

Daniel Barratt and researchers from Parma University in Italy and Aarhus University in Denmark have used a cinematic method called the Kuleshov effect, developed by the Russian director Lev Kuleshov in the 1920s, as a springboard.

The researchers’ approach
The Kuleshov method is about cutting between pictures of faces, the surroundings and the context. This may affect how the audience interpret the feelings of the characters.

In the same way, the researchers behind the new study have exposed 24 people between 30-50 years of age to pictures of faces with neutral expressions and then cut to sequences with different contexts, e.g. a child with a doll, a dead woman in a coffin and a bowl of soup (see the illustration).

The participants then had to assess the mood and the level of excitement in the neutral faces.

”Those who first saw a picture of a neutral face and then the sequence with the little girl and the doll made the interpretation that the neutral person was happy. However, cutting to the dead woman in the coffin created an impression of sadness in the same neutral face. The bowl of soup made the participants interpret the face as being hungry”, Daniel Barratt explains.

The results of the study have been published in the recognised journal Scientific Report – Nature. 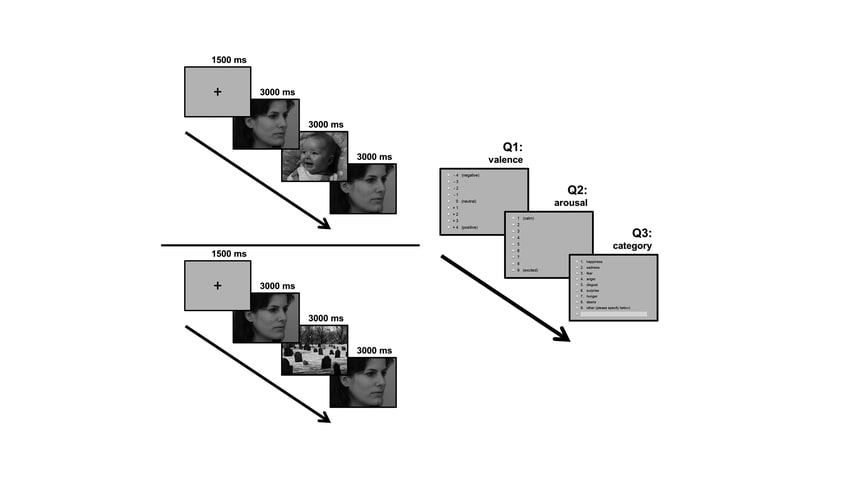 In the illustration above you see images of the facial expression and contexts that the participants were shown and had to assess according to how emotional they thought the face was.

How can we use these results?
Besides consolidating how important context is to the way we interpret each other, the results contribute to an understanding of the role non-verbal communication is playing.

To a large extent, we interpret each other based on non-verbal communication, i.e. body language, which is also part of the context when we read each other, says Daniel Barratt.

For this reason, it is important to know how to communicate and read each other in a business situation and intercultural negotiations:

”In fact, it is easy to see if a person says something he or she does not mean,” says Daniel Barratt and underlines that the new study is based on a small study sample and that one should be careful generalising too much.

However, the study is building on a former, large study with 36 test subjects from 2016 by Daniel Barratt and Swedish researchers from Lund University. So, according to Daniel Barratt, some of the tendencies of the study also apply to society.

Research publication 2019: How context influences the interpretation of facial expressions: a source localization high-density EEG study on the “Kuleshov effect”.