Companies welcome the drive to innovate with open arms. Infectious to the point of producing measurably more patents, the drive to innovate is a trait highly specialised staff bring along when they change jobs. Most surprisingly, the company they left behind also becomes more innovative. These are the conclusions of new research at CBS. 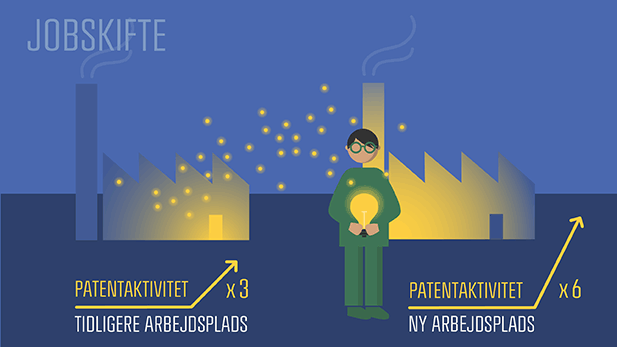 Some staff possess an exceptional ability to generate new ideas. A few to a degree that leads to new patents. Their strong drive to innovate and create something original rubs off on co-workers during their careers. Research from CBS and the University of Zurich shows that when highly specialised staff from development departments change jobs, the result is more patents at the new place of employment and, most surprisingly, also at the company they left behind.

"Researchers have always had the feeling that when specialists change jobs, it produces more knowledge, innovation and discoveries. The most spectacular aspect of our data is that the previous employer also experiences a positive effect when it ‘loses’ a specialist,” says CBS Professor Thomas Rønde.

Job change=innovation
Rønde explains that the effect can be measured based on the number of patents a company applies for. For more than ten years Rønde has worked jointly on a research project with Professor H.C. Kongsted from CBS and Professor Ulrich Kaiser from the University of Zurich. They analysed companies and their employees who submit applications to the European Patent Office. The hard data confirm that changing jobs between companies accustomed to filing patents leads to greater innovation and more discoveries.

"An average employee in a development department contributes six times as much to patent applications in the new company compared to an equivalent employee who hasn’t changed jobs," states Rønde, adding that:

"What’s truly interesting is that employees who change jobs contribute three times as much to patent applications for their previous employer than if they had stayed."

Knowledge sharing with former work place
The big question is why does this happen. The researchers behind the study do not yet know with certainly what the answers are. There are numerous indications, however, that knowledge sharing between innovative employees passionate about making discoveries during their careers increases innovation across companies.

"People don’t just completely drop out of the picture simply because they leave a company. They have networks and old colleagues to exchange knowledge with. We also see specialists who have changed jobs mention their previous workplaces when submitting patent applications," explains Rønde.

Non-compate clauses damage innovation
This research adds fuel to the fire for the discussion on the widespread use of non-compete clauses. The new figures indicate that these clauses may result in fewer patents than would otherwise be the case because they chain employees to the company.

"Our research indicates that tough non-compete clauses are not always a good thing for the companies that use them for their employees. There isn’t necessarily always a loser when specialists change jobs. On the contrary, there can be much to gain if a company instead tries to influence where former employees end, to recruit new specialists and to actively network with former employees," asserts Rønde.

About the research
The researchers evaluated the effect of changing jobs among all specialists in development departments in companies actively applying for patents from 1999 to 2004. Read their research publication.