The publication ”Space vs Place: Comparing space-based Movements and Place-based Experience at the Roskilde Festival 2015” has been presented at the International Conference on Social Media & Society, 2016, London.

The big data analytics study of urban informatics has been made possible with over 39,000 participants voluntarily providing GPS tracking of their movement within the 2015 Roskilde Festival Grounds

Roskilde town temporarily becomes the fourth largest city in Denmark for one week every year.
There is an estimated population of about 110,000 individuals on the ground each day at Roskilde Festival

3,215 new bachelor students are starting at CBS after the summer holidays. We are looking forward to welcoming the many new students to a reopened campus. This year, the study start will be different because of COVID-19 and the students will meet a semester that is unlike previous semesters.

Researchers from Copenhagen Business School (CBS) have mapped the digital layer of Roskilde Festival. When festival-goers move around with their phones, researchers can visualise what makes places meaningful to guests based on GPS-data and social media. This knowledge can be applied to other large events and urban development, says Ravi Vatrapu, Professor at CBS. 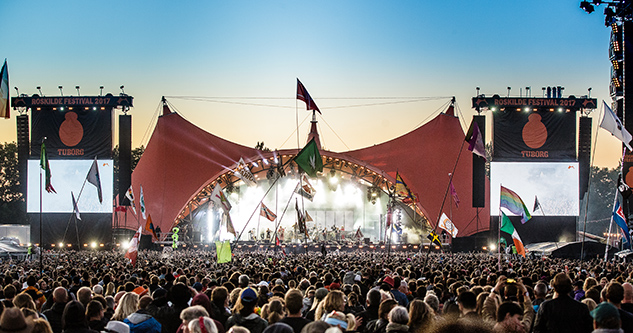 When superstars such as Bruno Mars and Nick Cave & the Bad Seeds enter Roskilde Festival's Orange Stage, a team of researchers from CBS will monitor the anonymous GPS-data and activity on social media. In the past three years, researchers have analysed the digital layer of the festival, which, among other things, have resulted in the research publication “Space vs. Place: Comparing space-based Movements and Place-based Experience at the Roskilde Festival 2015”.

The publication states that the rapper Kendrick Lamar attracted the greatest number of the guests when he did his performance at the Orange Stage. He also managed to keep them there longer than other artists at the same stage. However, social media activity such as tweets and posts was not corresponding to the number of attendees during the concert. The indie rock band Florence + the Machine had a higher score with proportionately most activity on social media.

Professor Ravi Vatrapu is in charge of this year’s festival lab, the Big Data Analytics Living Lab, of which the purpose is to build on the research outcome. So far, some of the most interesting insights from this project is how the festival data shows that people transform the physical space to a social place through digital media platforms - a concept that Vatrapu calls “geography of importance”.

“The experience of the festival, the so-called ‘orange feeling’ tends to also find expression in the digital layer. A good festival invariably provides good social media experience. You cannot separate the actual concert in the real world from the social media experience in the cyber world. The whole experience is important”, says Ravi Vatrapu, Director for the Center for Business Data Analytics at CBS. He continues:

“People only share what they think or hope is relevant, interesting, important – what they put meaning into and invest time in. In this sense, personal, meaningful physical spaces become digital places.”

Festival-goers were very active watching the Florence + the Machine concert through their phone, but this is not necessarily a good thing.

“There is social buzz before, during and after a concert. People are excited in their anticipation, experience and reflection. But if the social media activity level is too high during a concert among the people attending it in the real world, they might not be enjoying the concert or paying the “aesthetic” attention to the concert that is desired by the artists. This is a paradox. Perhaps the artists prefer a particular balance or would seek a share of the monetisation of the social media attention they help generate?”, questions Ravi Vatrapu.

There is no doubt that Roskilde Festival can learn more about their brand identity through social media. In this way, they can create a better festival experience for their audience, says Ravi Vatrapu. 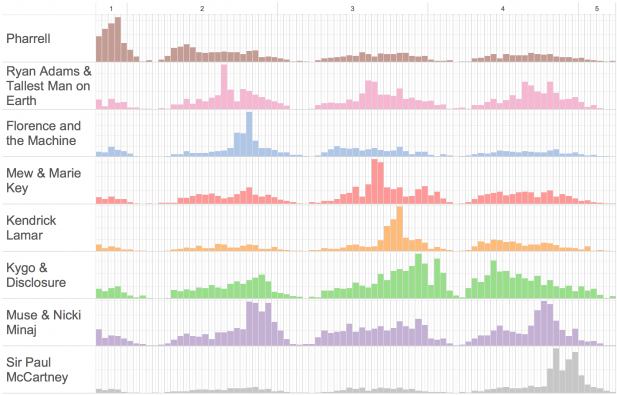 Conversation flows before, during and after the concerts at Orange stage, Roskilde 2015. Figur 9 in the research publication.

Big Social Data optimises music schedule
Professor Vatrapu has acted as a consultant to Roskilde Festival on how social media can help put together the concert schedule in order to optimise the festival infrastructure.

”If two artists with a 20,000 fan overlap on social media are playing at the same time, we can estimate how many are likely to go from one concert to the other. This might not be preferable in terms of the associated opportunity costs for the festival customers (e.g. guests spending time on transport instead of maximising their concert time).”

Earlier, researchers from CBS Center for Business Data Analytics have been able to build a model that predicts the development of iPhone sales and the number of spectators at a football match based on social media activity.

Read the story: Social Big Data can predict the behaviour of football fans

Focus on health data this year
This year, the research team will remain focused on studying festival-goers sharing their experiences on social media by monitoring why, where and when the guests are active on social media.

Also, the researchers will focus on public health parameters. How many kilometres do festival-goers walk? How much do they sleep?

Ravi Vatrapu is looking forward to visiting the venue again this year: “There are great research opportunities and organisational implications in analysing layers of data at the festival. It gives us an enormous potential for understanding the overall use of public spaces at major events in particular and cities in general”, says Ravi Vatrapu.

Professor Vatrapu has been invited to present and discuss the research results with other music festivals and a German event agency.

The team of this year’s  festival lab, Big Data Analytics Living Lab, also consists of PhD students from CBS and University of Copenhagen and master students from Kristiania University College in Norway.

Overview of projects in the festival lab 2018