Are global value chains really resilient? Lessons from the Covid-19 pandemic and the war in Ukraine

CBS employs more than 700 researchers. Each year new faces join our faculty. In each edition, the newsletter will introduce some of CBS’ recently recruited researchers.

How do you work together across languages and cultures? 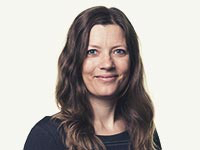 Dorte Lønsmann wants to work at CBS for one reason in particular: Research here is for the benefit of society, both in terms of research-based education and research collaborations with private and public organisations. Great possibilities of inter-departmental collaboration at CBS are also a plus factor.

Dorte Lønsmann is interested in the social impact of language, especially corporate language - also in multilingual organisations. Dorte Lønsmann has been engaged in this research field at CBS since 2012, and in May she was appointed associate professor of anthropological linguistics. She sees the project LINGCORP as one of her major academic achievements, where she has been studying multilingual global companies together with fellow researchers from Denmark and abroad. They have succeeded in building strong, national and international research networks as well as networks with organisations and companies about data collection. Currently, Dorte Lønsmann and a group of research colleagues have been granted funding for a new project about transient multilingual communities. This time they will be studying temporary working communities; for instance how collaboration takes place in project teams with people of different language and culture.

Dorte Lønsmann lives in Amager with her boyfriend and their eight-year-old triplets. The only thing that comes remotely close to being a hobby for Dorte Lønsmann is reading fantasy and science fiction novels because of the escapism they offer, but also because of the genre's social criticism.

A requirement for a more careful use of fiscal policies 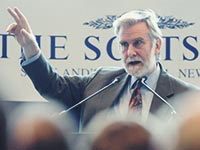 Andrew Hughes Hallett, visiting professor at Department of Economics  at CBS and Professor of Economics, University of St Andrews

How do pensions, demands for social support and changing demographics affect an economy's fiscal balances? Is this going to make our public finances unsustainable as the IMF thinks? Andrew Hughes Hallett and his research colleagues at CBS disagree: Early results show that it is possible to remain sustainable in the new normal of slower growth without sacrificing social support, education, income equality or pensions. But it requires a more careful use of fiscal policies than in the past. The big question is how we get to that position without being derailed by the political economy aspects or poor productivity. According to Andrew Hughes Hallett it is an important subject, but one that has attracted surprisingly little formal analysis in economics. Andrew Hughes Hallett aims to change that. He has a long standing collaboration in research with Professor Svend E. Hougaard Jensen from CBS and it is far more convenient to pursue research goals in Copenhagen.
Among Andrew Hughes Hallett greatest academic achievements are his PhD and ex-PhD students. He has about 30 in senior positions in central banks, international agencies and universities, and they make him proud with their publications and influence on policy. His biggest academic contributions are: The theory of economic policy accounting for rational expectations, theory and analysis of policy coordination, theory of policy announcements, fiscal rules, fiscal sustainability and debt targeting, business cycles and volatility transfers.

Andrew Hughes Hallett, 68 years old, is married and has three children - a power supply engineer in Australia, a cell biologist at Harvard, and a medical physician assistant at Duke University, so in his own words he is outclassed. Among his hobbies are: Whisky, hiking, conversation, history, and game theory in practice.

How can business contribute to human rights? 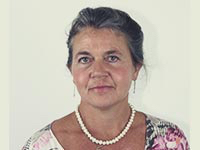 Barefoot children on the icy streets of Kathmandu and teenage girls working as prostitutes in Phnom Penh led Professor Karin Buhmann into her field of research. Early in her career Buhmann held a post at the Ministry of Foreign Affairs of Denmark that involved travelling to developing countries, which increased her interest in exploring what it means when not just the state but also industry and commerce are expected to   respect or promote human rights. Buhmann currently works with issues concerning CSR, sustainability and especially business responsibilities for human rights. Her starting point is often problems witnessed with her own eyes. For example, child labour is more complex than simply not hiring minors, which is against national and international law. The economic conditions that cause child labour raise questions on how businesses can help children and young people from being pushed even further into poverty by depriving them of the opportunity to earn money. Buhmann’s research focuses not just on developing countries but also Europe and the Arctic. Global warming, for instance, begs questions on how oil, minerals and other natural resources may be extracted from the Arctic in a manner that benefits and involves the local community as much as possible.

Buhmann is trained as a lawyer but, for her, the law concerns not just offences, punishment and enforcement of rules but also how norms on ideal behaviour become implemented as actual conduct. This provides the law with tremendous potential regarding how sustainability ideals are put into practice. As a result Buhmann works with, for example, regulatory strategy, especially ‘smart’ or ‘intelligent’ regulation, which induces companies to contribute to societal needs. She has pursued this research path for several years. At CBS she was hired as an Associate Professor at CBS at the end of 2013 after having worked at Roskilde University and University of Copenhagen. In February of this year she was appointed Professor at the Department of Intercultural Communication and Management. According to Buhmann, CBS is a leading Danish research institution for social scientists engaged in working with sustainability and CSR. Her greatest academic achievement to date was receiving her advanced post-doc degree in 2014 based on her thesis “Normative discourses and public-private regulatory strategies for construction of CSR normativity: Towards a method for above-national public-private regulation of business social responsibilities”, on which she began research in 2006.
The international nature of her field means Buhmann travels widely with her work. In her spare time, apart from spending time with family and friends, she experiments with foods encountered in her travels, and enjoys kayaking and gardening at her weekend cottage.

New course about pension will reflect the financial situation 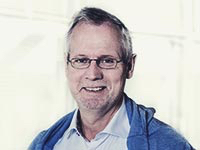 Henrik Ramlau-Hansen, Associate Professor at the Department of Finance

Henrik Ramlau-Hansen does not consider himself a "typical new employee". He has just turned 60 and comes from a position as CFO and member of the Executive Board in Danske Bank. For a while he has thought about "making a small difference and giving a little bit back to research and teaching" after retiring from his business career. At CBS, he found an exciting research environment at the Department of Finance. His practical experience will help him create courses in pension economy. For instance, the currently low interest rates pose a great challenge to pension savings in Denmark.

1 June he took up a part-time position at CBS. In addition, he holds a number of directorships within the financial sector - one of them for Danica Pension, where he is former CEO. Before that, Henrik Ramlau-Hansen, who is Doctor of Science in Actuarial Mathematics, had a recognised academic career and was associate professor of insurance mathematics at the University of Copenhagen. Among his significant contributions is his research in kernel functions - moving averages used for a series of numbers that need to be weighted together to forecast the underlying trend. And as CEO of Danica Pension, he introduced the so-called market rate or unit-linked products; pension schemes, where the yield follows the markets, and where a minimum yield is not guaranteed.

In his own time, Henrik Ramlau-Hansen devotes attention to his field by for instance reading books about the financial crisis. At the moment, he is reading ’The Curse of Cash’ by Kenneth Rogoff and a book about the sinking of Titanic. He always reads two books at the time for the sake of variation. He lives north of Copenhagen with his girlfriend Helle.