Anoush Margaryan is a new professor at CBS and a learning scientist who studies how people gain knowledge. We sat down with Anoush to talk about her background and most important research messages. 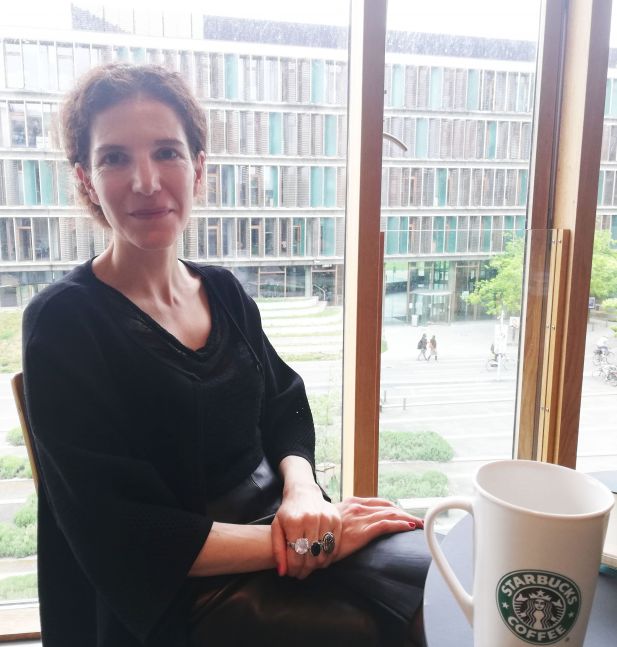 I arrive at Anoush Margaryan’s office at CBS on a Wednesday afternoon.

Her office is meticulously designed and the clean lines of the desk are only broken by a banana and a bottle of water.

Anoush is sitting at a small round meeting table in the middle of the room – she is holding a Starbucks coffee cup with a tight grip.

Very international with the coffee, I begin our conversation with a smile.

”It’s just water. I don’t drink Starbucks coffee– I just like their large mugs,” she replies.

Her reaction confirms my first impression – nothing high-and-mighty about Anoush Margaryan, new professor at the Department of Digitalization at CBS and a scholar researching learning methods and work practices.

And this is despite the fact that she has been awarded with several international prizes and has worked in five different universities in the UK, Germany, Netherlands, Armenia and now Denmark.

Neither British nor Armenian

Anoush Margaryan is a global citizen and has had to develop several identities living in five different countries with very different approaches to education:

“The countries I’ve worked in are very different. I was born in Armenia and earned my bachelor- and my first Master’s degree there in the mid- 90s. I studied Philology and it was a very theoretical education. When I came to The Netherlands to do my second Master’s degree in Educational Technology, the study in contrast was very practice-oriented.”

After some adjustment time to a different educational approach, Anoush earned a PhD at the University of Twente in The Netherlands.

Today, after 13 years in the UK, she is now a British citizen, whilst still holding her Armenian passport as well. Still she feels somewhere in between nationalities:

”Every time I speak to people in the UK, they immediately know from my accent that I am not British-born. Yet when I visit Armenia, people often speak English to me, assuming I am a foreigner,” she says.

However, according to Anoush, having lived in many different countries definitely has its advantages:

”Copenhagen is very different from London, but every city has to be experienced on its own terms and not be subjected to comparison. I bring different parts of the cultures I’ve had the fortune to live among into my personality. I think it makes me a richer person,” she says.

Different approaches to being researchers

Despite the many relocations, one thing remains unchanged for Anoush Margaryan. The passion for research. More specifically, research in learning and education, and the possibility to link it with the demands of the contemporary labour markets.

Therefore, when she was offered the Endowed Chair of Blended Learning (also known as RiBL project) at CBS, she was delighted to take the opportunity.

The aim of this five-year cross-institutional project is to develop and implement cutting-edge, innovative approaches to technology-enhanced learning and teaching.

This will enable CBS graduates to develop the knowledge, skills and capabilities to be successful in the emergent digital economy and society.

Anoush has been researching this topic for nearly 20 years; however, her interest in research on learning and education emerged rather than being pre-planned:

”There are different approaches to selecting one’s vocation. Some people keep searching for what they like and what work they wish to do. Other people try something out, stick with it, put in consistent effort and eventually become more and more skilled in that area. When you become really good at something, you start to like it. That’s how I’ve become a researcher,” says Anoush Margaryan.

Do we still need education?

It was through magazines and papers that Anoush discovered a new type of work called “crowdwork”.

Crowdwork is a form of digital work in which large numbers of people from across the world are brought together through internet-based platforms to carry out tasks for pay.

It involves different kinds of tasks ranging from relatively low-skill work such as data processing and transcription to high-skill professional services such as software development, graphic design, data analytics or legal advice.

”Research shows that there are fundamental changes in our work structure in terms of technology and new working methods. More and more people are taking up platform-based work across Europe and the world,” says Anoush and elaborates:

”Our research findings suggest that what matters to clients and employers in the crowd workplaces   is the worker’s experience, their portfolio and the testimonials of their previous clients, rather than workers’ educational qualifications. This indicates that education may be a less significant signalling mechanism in this emergent labour market. Some are literally asking whether we need education at all in future.”

Anoush Margaryan is acknowledging that the question is provocative, but it still very relevant.

”In my opinion, education is fundamental and necessary. It’s about more than skills and competences. It’s about being able to think systematically and scientifically, taking a critical approach and about learning how to continuously develop knowledge throughout your life. At the same time, it is important to understand how universities can better align with the world of work,” she says.

Anoush Margaryan is looking forward to analysing how pedagogic approaches at CBS could help prepare students for a labour market that is placing more and more focus on specific competences and experiences that can be transferred directly to a job after graduation.

”The world is constantly changing, and our graduates may follow a completely different career path from what we know today where they change professions several times. To an increasing extent, people will have to work side by side with robots, overseen by algorithms. We have to prepare the students for that,” Anoush Margaryan ends.