Are university students too goal-oriented? Are supervisory boards to have representatives elected by the public vote? How much can you make on welfare? Here is an overview of the more than 24 debates CBS will join at this year’s Political Festival on the Danish island of Bornholm. All the debates will be in Danish. 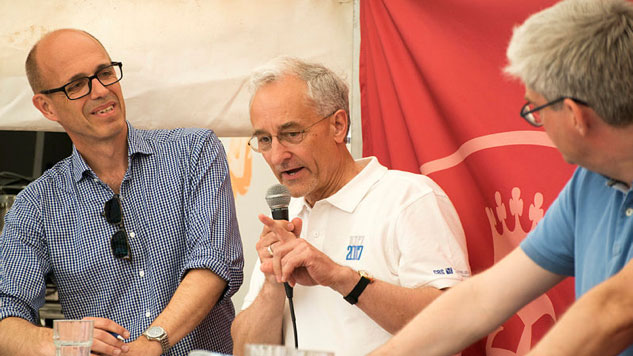 With participation of the President of CBS:

Over four rounds, Danish newspaper Politiken and The Danish Center for Research on Women and Gender invite to a discussion about “Colourless feminism - why is feminism considered a left-wing project?” and “Man’s fight for liberation - is there something in the opinion that ‘women have won’ and that equal opportunities now is men’s fight for liberation?” The panellists are Per Holten-Andersen, President, CBS, Ditte Giese, Politiken, Louise Kjølsen, twerkqueen and psychologist, Stine Bosse, The Danish European Movement, Henning Thiesen, DJØF, Dennis Nørmark, writer and anthropologist, Saman Atter Motlagh, psychologist, and Mette Davidsen-Nielsen from Politiken as moderator.

New battle for (education) cultural values? In with immersion and out with superficial learning
Friday 15 June, 13.30-14.30 – Akademikernes Hus

Every 5 student do not see a reason why they should learn more than what they need for their exams, a survey from the Danish Evaluation Institute (2018) shows. Students of today are far more goal-oriented than ever and the massive focus on speed and progress affects study culture for better or for worse. Have we as a society gone too far in our eagerness to rush students through school? Or is this reasonable, now that the programmes are publicly funded? Per Holten-Andersen, President, CBS, are among the panellists.

How do we prepare our students best for a labour market influenced more and more by digitalisation and automation? This question will be addressed in a debate about the labour market of the future, including Per Holten-Andersen, President, CBS. Other debaters are Kim Simonsen, Chairman of HK Denmark, Mads Eriksen, head of education and research policy in the Confederation of Danish Industry, and Christine Sørensen, Head of Policy Denmark and Norway at Google.

With the participation of CBS researchers and administration:

Voluntary mentor schemes - for the benefit of everyone
Thursday 14 June, 13:15-14:00 at J20 – Anbragte og udsatte børn og unge at Kæmpestranden

Mentor schemes have gained more popularity in Denmark, but how can voluntary mentors contribute to the social as well as the education area? This will be debated by Benny Andersen, chairman of the national union of social educationists, Jannik Schack, head of policy for the think tank DEA, Lars Brittain, network head at DJØF, Anders La Cour, researcher in voluntariness at CBS, Luna Lindén, voluntary mentor at Learn for Life and Stine Hamburger, head of programme of voluntariness, Learn for Life.

Join a debate focused on collaboration and joint responsibility for lifelong learning. This is essential in a time where robots, artificial intelligence and digitalisation are going to replace many jobs. This issue will be discussed by Tine Rod, Director, Confederation of Danish Industry, Lars Nørby Johansen, chairman of the board, Syddansk Universitet, Majken Schultz, Professor, CBS, and Per Falholt, chairman of the board, DTU.

Join a combined debate and workshop focused on encouraging more men to take paternity leave. This can be a unique investment for a family but also society.

Ole Bjerg, Professor at CBS and Chairman of the board in Gode Penge, will in his presentation compare new types of money such as e-kroner and Bitcoins with old-fashioned physical money.

How can we ensure even more socio-economic companies that can create new possibilities for vulnerable people on the labour market? This topic will be debated by Katja Isa Sørensen, Research Assistant, CBS, and Christina Grøntved, Director, Incita. The debate will be moderated by John Krog, industry sector executive, Selveje Denmark.

The debate about neo-liberalism moves from the paper to the Political Festival, when Niels Fuglsang, PhD Fellow at CBS and Jonas Herby, Senior Advisor, CEPOS, discuss their different views on neo-liberalism. Chief Editor at Information, Rune Lykkeberg, will moderate the debate.

The UK is leaving the EU. On this occasion the debate will take its point of departure in how we ensure impact and equal terms across borders. Participants are: Mette Walsted Vestergaard, journalist, Per Bremer Rasmussen, CEO, Forsikring & Pension, Ole Helmersen, Associate Professor and UK expert, CBS, and Martin Lidegaard, former minister of foreign affairs, Danish Social-Liberals.

Listen to the dialogue: Do you believe in Generation World Goal?
Friday 15 June, 16:30-17:30 at A2 – Verdensmålenes tent at Danchells Anlæg

The welfare state of voluntariness: Dilemmas of organisation
Friday 15 June, 16:30 – 17:30 at G22 Høiers Iscafé at the outer/inner pier

Civil society and voluntariness are central topics in the discussion of the Danish welfare state of the future. Join a debate about the future role and organisation of civil society. Participants will be: Lars Bo Kaspersen, Professor, CBS, Anne Lise Marstrand-Jørgensen, author and spokesperson of Venligboerne in Greater Copenhagen, Trine Bendix Knudsen, head of secretariat, Dansk Folkeoplysnings Samråd and Christiane Mossin, postdoc, CBS.

Media house Den Offentlige invites to a debate about the concept of profit. How much can you make on welfare and who makes most money? Ole Bjerg, Associate Professor at CBS, will join this debate.

What do we know about contestability of municipal welfare? And what goes on at markets? This will be discussed by Carsten Greve, Professor, CBS, Claus Thykjær, administrative head of Greve Municipality, Kurt Bardeleben, lawyer and partner in DLA-Piper, Steen Houmark, CEO and author of ’The municipal Bermuda Triangle’, Maria Elverhøj, Quick Care, and Miriam Toft, CEO, Aleris Care.

Are the Ministry of Finance's computational models reliable?
Saturday 16 June, 15.00-16.00 at G19 - Tænketanken Cevea at the inner/outer pier

This debate is about the computational models of the Finance Ministry, which have been subject to criticism in the past years. Where do they come from? How have they developed? Which part to they play in Danish politics? And are they at all reliable? This topic will be discussed by Niels Fuglsang, Ph D Fellow, CBS, Hanne Pontoppidan, chairman of Uddannelsesforbundet, Mogens Lykketoft, member and former president of the Danish Folketing, and Otto Brøns Petersen, CEPOS.

Join this debate and learn more about the heavily debated crypto-currencies, the technology behind and what they mean to the financial sector of the future and you as a citizen. The panellists are Ole Bjerg, Associate Professor, CBS, Peter Nyholm, InsideBusiness, Tanja Lind Melskens, attorney to the Government, and Steen Lund Olsen, The Danish Financial Services Union.

Why it is a good idea to introduce digital e-kroner in Denmark? This debate will be about e-kroner, and Pelle Dragsted from the Danish Unity List will talk about their advantages. He is accompanied by Ole Bjerg, Associate Professor, CBS and member of the board of Gode Penge, who will present his arguments in favour of e-kroner and answer questions from the audience.

Join an entertaining presentation with stand-up comedian Michael Schøt and Ole Bjerg, Associate Professor, CBS and member of the board of Gode Penge. They will talk about the three stages people are going through when thinking about the current monetary system in Denmark. The debate will answer the fundamental question: How come we do not already have a new monetary system?

Reunion 1920 – a role model for Catalonia?
Sunday 17 June at A4 – Sydslesvig tent, A- Danchells Anlæg

Catalonia has expressed a wish for independence, which has lead to conflict between the central Spanish government and the Catalan regional government. This debate is about the conflict and explores how the Danish-German reunion in 1920 can inspire to a solution. The panellists are Christian Juhl, member of the Danish Folketing, Lukas Lausen, Chairman of U35, Anke Spoorendonk, European Free Alliance (EFA), and Uffe Østergaard, Professor Emeritus, CBS.

See the calendar of the People’s Political Party 2018