Why is it some fiery souls succeed in creating changes while others do not? Professor Eva Boxenbaum’s research concentrates on the driving forces that can generate permanent societal changes.

A donation from FSR Danish Auditors provides for a prestigious auditing professorship at CBS. Professor Thomas Riise Johansen takes on the position on 3 May. The purpose of this professorship is to ensure enhanced and more relevant auditing research and consequently the MSc in Business Economics and Auditing.

From CBS to Hong Kong and back again: Meet Professor Kasper M. Nielsen

Kasper Meisner Nielsen, Professor of Finance, has returned to CBS after 12 years in Hong Kong. Read about his journey and why he thinks a high pay in general is completely acceptable. 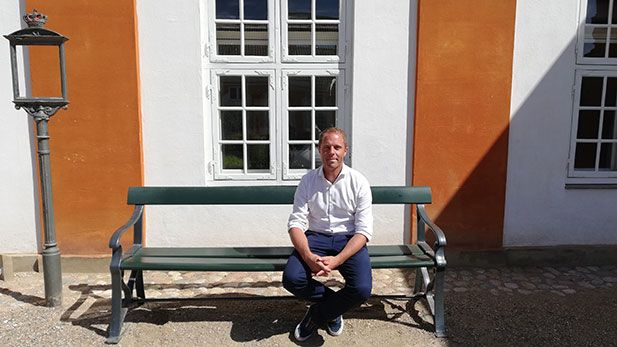 With his hands in the pockets of his navy chinos, Kasper Meisner Nielsen looks searchingly around by the entrance to Frederiksberg Gardens.

We have never met before, so I have brought a tote bag with the CBS logo on with me in the hope of being recognised as an interviewer.

He spots the bag and walks towards me at a confident pace. We shake hands and the bright sunlight is reflected in his white shirt, which is in sharp contrast to his tan.

How is working at a university in Hong Kong different from working at CBS, I ask as soon as we have found a bench in the shade.

”It isn’t, really. The job is the same everywhere”, he answers.

Kasper Meisner Nielsen is a professor of finance at the Department of Finance at CBS. He has just returned to Denmark after 12 years as a researcher at Hong Kong University of Science and Technology. I met Kasper for a chat about the road to research and his studies of pay and value creation in companies.

From assistant to high-profile researcher
Number-crushing and spreadsheets have always been in the DNA of Kasper Meisner Nielsen. However, a teacher who had spotted Kasper’s talent for data analysis very much influenced the path from being a student of economics at the University of Copenhagen to a faculty position.

”I thought I was going to work in the business community or the Ministry of Foreign Affairs. But my lecturer asked me if I wanted to be a research assistant during my second year. I started in a 20-hour position, but that increased quickly,” says Kasper Meisner Nielsen, who ended up being an assistant for 18 months.

The finance fascination later turned into a position at CBS and – until recently – a professorship at Hong Kong University of Science and Technology.

But after a 12-year long business adventure in southern China, it was time to go home.

”It was a big decision to leave Hong Kong because I was working with so many passionate and dedicated researchers. However, with an eye to the future, I would like to contribute to the massive development of finance at CBS that has taken place over the years,” says Kasper Meisner Nielsen.

Kasper also wanted to be closer to his family in Denmark.

A high pay can be completely acceptable
What eventually decided whether the professor could go to Denmark was the Danish Finance Institute, whose purpose is to ensure a high academic level in Danish research and education.

”The institute donates money, which can minimise the earnings gap between CBS and other international business schools. Without the institute, I was not going to be employed at CBS”, he says.

Kasper Meisner Nielsen is in fact very interested in the whole question about pay. Based on his research, he finds that the debate on high CEO bonuses is often one-sided.

”Pay should reflect performance and the value you have created for the company. If it does, a high pay is not a problem,” he says.

Nets, the provider of digital payment services, who has been severely criticised in the media because of their large management bonuses, is not making Kasper’s blood boil either.

However, their bank charges possibly being too high is a completely different story.

Pay and value are connected
Kasper Meisner Nielsen blinks at the sun and narrows his eyes. He continues:

”We have carried out a survey in which we test how the share market reacts to the news of the sudden death of the CEO. It sounds a bit morbid, but it tells us something about the CEO's impact on corporate value creation. Our results show that the death of the highest paid CEOs also caused the most significant falls in the share price of their company.”

So there is often a positive link between pay and value. The ones who are paid the most create the most value for the shareholders, Kasper Meisner Nielsen argues:

”And if you reduce the pay, it may have negative impact on economic growth, because the most talented CEOs will look to other countries where they will be paid more. This could end in driving Danish companies to lower pay and consequently less societal growth than usual.”

It is okay to make high demands on researchers
The amount of effort you put into your job is often reflected in the pay and value, says the 41-year old professor from South Zealand.

Kasper Meisner Nielsen himself has a clear goal of contributing to society and be one of the best in his area.

”When you have the privilege of being a researcher, you have to give value for the money you get. So I aspire to address important social issues and publish my research in the three best finance journals”, he says.

More specifically, Kasper is talking about the Journal of Finance, Financial Economics and Review of Financial Studies.

But isn’t there a tendency to give the journals too much power? That it is vital to get your name on an article in a prominent scientific journal to get funding without having made a real contribution to society. Is there such a thing as a publication pressure?

“I do not feel that at all. I think that it is okay to make demands on researchers. Again – pay and performance are linked, and we are competing for top publications”, he answers. 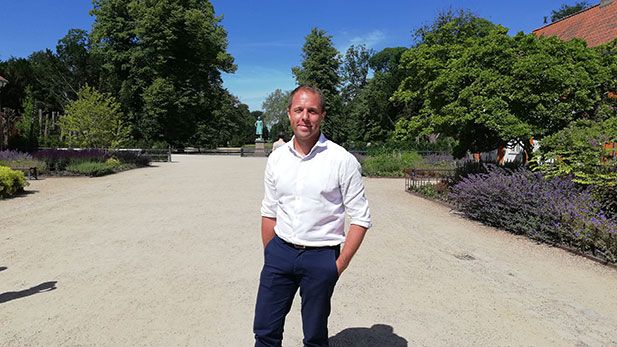 The arrow points in only one direction
I ask Kasper to stand up from the bench in the shade and place himself in front of the statue of King Frederik 6 by the entrance to the gardens. I want to take some photos for the article.

He gets up and walks decisively towards the statue. The arrow always seems to point in one direction for Kasper Meisner Nielsen. And that is forward.

Even if it took 12 years, where the last six weeks of them took place at the Trans-Siberian Railway through desolate lands from Beijing to Moscow, it was clear where the journey was going to end.

”I am extremely happy to be back as a researcher at CBS”, Kasper Meisner Nielsen concludes.