Five new members to join the CBS Board of Directors

A few replacements have been made in the Board. At the end of 2019, four new internal members were elected by employees and students at CBS, while CBS’ appointment committee appointed a new external member.

Do you want to know more about sustainable packaging and green fashion? Read about these and many other topics in our overview of new research from CBS.

The talent and drive of five CBS students was recently acknowledged by CBS and the Finn Junge-Jensen Scholarship. A common feature for the five scholarship recipients is that they all put in an extraordinary effort. 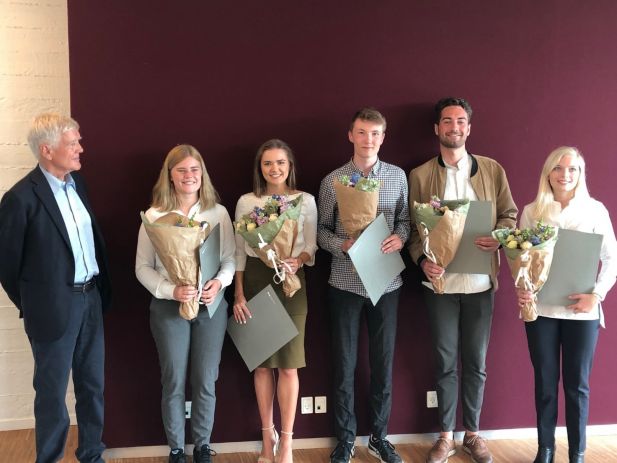 CBS presents the Finn Junge-Jensen Scholarship, which is worth DKK 100,000, for the fifth year in a row. This year, the scholarship was distributed between five of more than 200 applications from students at CBS. The scholarship is earmarked for travelling, so that the students can improve their skills during a period of study abroad.

Who has the drive and talent at CBS in 2019?
The scholarship recipients can be found within the categories "Drive" and "Talent". They are all students from CBS, who, besides from having international outlook, either have an apparent academic talent combined with entrepreneurial skills, or make an extraordinary effort for the benefit of CBS.

Not only were these skilled students acknowledged for being high-performing students but also because they are engaged in other relevant activities. Activities that span from participating in this year's CBS Case Competition to board duties, working in CBS' student associations and find time to be entrepreneurs. “You contribute to the uniqueness and good study environment of CBS,” said Finn Junge-Jensen, designator of the scholarship.

A motivating scholarship
The recipients were celebrated at a reception with champagne and speeches by former recipients of the scholarship. Proud parents and friends also contributed to making this day special.

”Say yes” was the central message from previous year’s recipients. ”And try a lot of new things”. The others agreed and encouraged the new recipients to challenge themselves professionally and culturally and return with a suitcase full of experiences.

The scholarships were presented by the designator of the scholarship Finn Junge-Jensen, former president of CBS and member of the nomination committee. Finn Junge-Jensen gave a personal motivation for each recipient and thanked them for their great commitment to CBS. He encouraged the students to explore the world, commit to both education and society and not least seize the opportunities and make the most of their studies abroad.