From Rio to Roskilde - and back

The Rio+20 Summit did perhaps not achieve all its goals, but it certainly set sustainability on top of the global agenda. Inspired by all the possibilities the Summit offered and all the objectives yet to be achieved, a group of researchers at Copenhagen Business School (CBS) established a partnership with Roskilde Festival in 2013 to analyze the sustainability barriers and opportunities during the festival.

The objective of the project is to create awareness of how the global sustainability challenges from the Rio+20 Summit are manifested in a local setting, in this case the Roskilde Festival. The partnership between CBS and Roskilde Festival also involves of a number of other research institutions, private companies, and industry organizations, including the University of Copenhagen, Aalborg University, Confederation of Danish Industry, Rockwool, and Implement Consulting Group. In close dialogue, the partners identified three sustainability areas relevant to the festival and Danish society: waste in general, food waste in particular, and alternative housing.

Results from the Partnerships

It is estimated that globally, around one third of all food produced never reaches the stomach of the end consumer1. To make things worse, the food wasted has taken up other resources (water, land, energy) and is often produced using pesticides and the like. Therefore, food waste represents a major sustainability challenge across the world. At Roskilde Festival, guests can eat at approximately 150 food stalls run primarily by civil society organizations (charity, schools, sports clubs). The objective of this project is to identify challenges and solutions for reducing food waste at the

Roskilde Festival, which would reduce the environmental footprint and increase the income generated to the festival and the civil society organizations. The findings from the study indicate an extreme variation in practices, which call for much more knowledge sharing and coordinated efforts. Moreover, the project is documenting the potentials for making unused food from one location available for people at another. Last, the project highlights some of the systemic barriers for reducing food waste within and outside the Roskilde Festival setting.

Millions of people around the world are living without proper housing in refugee camps, slum cities and rural areas. To address this problem, the Danish company Rockwool made a real-life experiment at Roskilde Festival where they tested a new type of temporary housing that is water proof, cannot burn, keeps temperature constant, and is flexible in use. The Rockwool experiment was part of Roskilde Festival’s Orange Innovation initiative called Dream City, which is an area of the festival dedicated to cultural and social events and experiments. During the festival, Rockwool got inspiration for how to improve the design of their ‘base of the pyramid’ product and adapt it to new markets. Actually, the company ended up transforming one of the prototypes to a cooling system that was used by one of the food stalls at the festival.

Last, the project looked at how waste from the festival can be transformed into resources. In particular, focus was on the festival guests’ perception of when something valuable becomes waste (and vice versa), e.g. tents, beer cans, and sleeping bags. The analysis seems to indicate that guests have a ‘festival identity’ and an ‘everyday identity’ which influence their perception and handling of waste. The results from the analysis may serve as input to future experiments that will decrease the amount of waste generated and disposed at the festival. 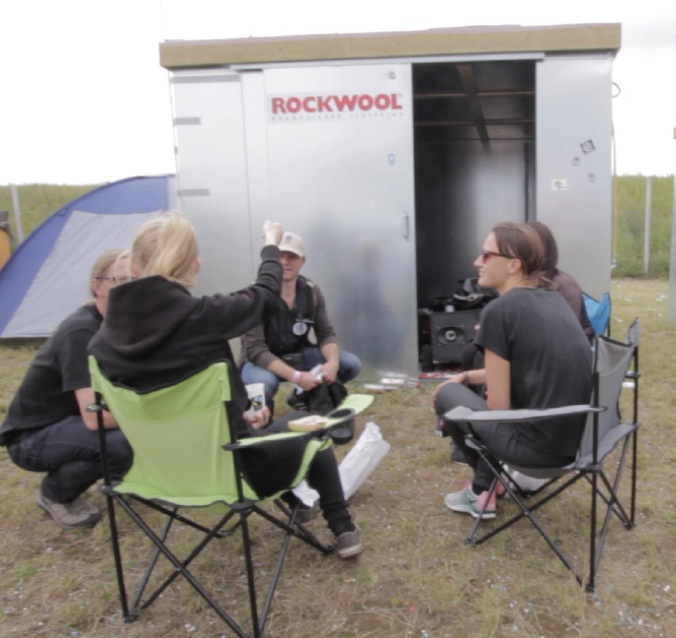 The long-term objective of the project is to test a number of new sustainability solutions at Roskilde Festival 2014, which hold potential for alleviating some of the social and environmental challenges experienced by the festival and society more generally. During the one-week event, the Roskilde Festival becomes one of the biggest cities in Denmark and thus an ideal research lab for running such sustainability experiments. In the future, researchers hope that the festival will serve as an extreme case for action based research that can advance our knowledge on various sustainability challenges and the underlying literature of nudging, collaborative consumption, and lean management. Research results from Roskilde Festival 2013 will be presented at an international conference hosted by the Confederation of Danish Industry on January 20, 2014 where key note speakers include Harvard Law Professor Cass Sunstein and Dr. Markus Kerber, Director General and member of the Presidential Board, BDI (Federation of German Industries).

During the one-week festival, the involved researchers observed behavior, conducted interviews, wrote blogs, participated in the festival work, and made photo/video documentation for research and dissemination purposes. Some of the work can be found on the project website, www.riotilroskilde.dk (in Danish only). The Rio to Roskilde project is partly funded by the Sustainability Platform.