The Oxford Handbook of Media, Technology, and Organization Studies 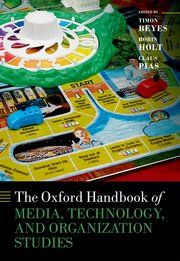 Our most basic relationship with the world is one of technological mediation. Nowadays our available tools are digital, and increasingly what counts in economic, social, and cultural life is what can be digitally stored, distributed, replayed, augmented, and switched. Yet the digital remains very much materially configured, and though it now permeates nearly all human life it has not eclipsed all older technologies.

It is in this spirit that each chapter focuses on a specific technological object, such as the Battery, Clock, High Heels, Container, or Smartphone, asking the question, how does this object or process organize? In staying with the object the chapters remain committed to the everyday, empirical world, rather than being confined to established disciplinary concerns and theoretical developments.

As the first sustained and systematic interrogation of the relation between technologies, media, and organization, this Handbook consolidates, deepens, and further develops the empirics and concepts required to make sense of the material forces of organization.

Timon Beyes is Professor of Sociology of Organisation and Culture at Leuphana University of Lüneburg, where he is also a director of the Centre for Digital Cultures (CDC). He holds a fractional professorship at Department of Management, Politics and Philosophy, Copenhagen Business School, where he was previously Professor of Design, Innovation and Aesthetics. His work focuses on the processes, spaces, and aesthetics of organization in the fields of digital cultures, art, cities, and higher education.

Robin Holt is a professor at the Department of Management, Philosophy and Politics, Copenhagen Business School, and visiting professor at Nottingham Business School. He has an eclectic range of research interests, all of which cohere around questions of organization formation. He is currently undertaking a lengthy study of craft, design, and technology and has recently published a book that investigates strategic judgment as a technology of self-formation.

Claus Pias is Professor of Media History and Epistemology at the Institute of Culture and Media Aesthetics (ICAM), Leuphana University of Lüneburg, where he is also a director of the Institute for Advanced Study in Media Cultures of Computer Simulation (MECS) and the Centre for Digital Cultures (CDC). His main areas of interest are the media history and epistemology of computer simulations, the history of media studies, and the field of Digital Cultures.

More info about the book

The page was last edited by: Department of Management, Politics and Philosophy // 01/30/2020