New book out by Christian Borch 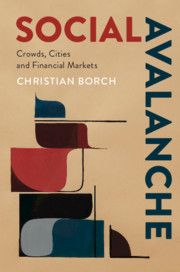 Individuality and collectivity are central concepts in sociological inquiry. Incorporating cultural history, social theory, urban and economic sociology, Borch proposes an innovative rethinking of these key terms and their interconnections via the concept of the social avalanche. Drawing on classical sociology, he argues that while individuality embodies a tension between  the collective and individual autonomy, certain situations, such as crowds and other moments of group behaviour, can subsume the individual entirely within the collective. These events, or social avalanches, produce an experience of being swept away suddenly and losing one's sense of self. Cities are often on the verge of social avalanches, their urban inhabitants torn between de-individualising external pressure and autonomous self-presentation. Similarly, Borch argues that present-day financial markets, dominated by computerised trading, abound with social avalanches and the tensional interplay of mimesis and autonomous decision-making. Borch argues that it is no longer humans but fully automated algorithms that avalanche in these markets.

The page was last edited by: Department of Management, Politics and Philosophy // 01/16/2020