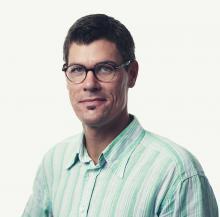 Professor, Dr. Phil
Academic Director of the Entrepreneurship Platform
Tel: +45 38152653
E-mail: dh.mpp@cbs.dk
Department of Mangement, Politics and Philosophy
What is your understanding of entrepreneurship?

My approach to entrepreneurship makes understanding it from inside its process more interesting than explaining it at a distance. This means I have not been interested in ‘who’ and ‘what’ -questions, as much as ‘how’ and ‘why’ -questions. Entrepreneurship is to be a process of organisation-creation. It sits there in-between the new idea (the invention) and 'the new idea with a market’ (the innovation) and makes the move from invention to innovation possible by creating the organisational processes that are initially missing for this move to happen. It does not exclude entrepreneurship from ideation or invention, but we are more likely to find field-specific experts there (such as engineers, medical doctors). Nor does it exclude entrepreneurship from innovation as a process, for entrepreneurship will dominate the earlier stages of innovation processes, whereas management will dominate the latter.

Many want to believe it is alertness, need for achievement, locus of control, opportunity-recognition talent, and the like. I don’t see this as adding much to an understanding of how or why entrepreneurship processes emerge and become successful. There can be a point with focusing on the individual for individuals are one central element in relationships, processes, and organisations. However, it is more powerful - for an understanding - to see creativity as something emerging from in-between rather than from within individuals. It is more powerful to focus on the dynamics of the relationship rather than on what is related simply. It is, finally, more powerful for an understanding of how an entrepreneurship process becomes successful, that we grasp the processual complexity, the coming-into-existence of organisation, and the gradual crystallisation of what can be described as an organisation. Little is understood from focusing on the individual.

It means we need to develop analytical, organisational, and communicative competencies in students. For they need to learn how to better potentialise relationships as creative; they need to better craft convincing stories of futures-to-come that can attract people, resources and investors to join in as co-authors to such stories; the need to better create organisation where such is missing for new ideas to become new ideas with a market, i.e., new ideas that has value (new or superior) for a user in the context of everyday practices. Developing such competencies is a question of organisation, calculation, fabulation, imagination, rhetorics, communication, and selling as it is a question of analysing tendencies in societal development that might hold potentials for newness in them. Identifying and making use of such tendencies in most often a question of relating different competencies in a productive network, where one gets relationally stronger. It seems entrepreneurship is an experimental discipline, just like chemistry. It needs its labs and studios, just like the chemist and medical student need their labs and experiments.

What is the role and function of entrepreneurship for private companies and
for the public sector?

Entrepreneurship is the process that makes new companies (and organisations) achieve being. This is highly interesting from a societal point of view because of the job-creating potential such processes have. In existing companies, entrepreneurship is the organisational capacity in innovation processes. It is the ‘white canvas’ that attracts new motifs, i.e., the organisation-creation capacity that makes ideation or invention expected, wanted, attractive. It is also the driver that pushes newness into the context of existing practices in established businesses. There, it often has the role of pushing back management, to make space for the new. In public sector organisations it is a not too dissimilar role: it generates newness that has value for users. It will always bring practices to the virtual fringe of things, asking how we can move beyond the present limit of the existing for the purpose of adding value to people’s lives.

Apart from what I just mentioned, entrepreneurship is important for society because it is a process that generates new jobs. This is the key process in a welfare state. Without jobs, no tax income, no societal service, no welfare. Bluntly put. However, entrepreneurship is not there primarily to prevent the welfare state from disappearing. It is there because there is desire to create. There is will to move beyond the present limits of the existing. There is passion to spend. A great effect of this is that jobs are created, more people have more interesting and meaningful lives, citizens get to live in a better functioning welfare state.