Professor of Finance, Jesper Rangvid has been appointed member of the Board of Directors of the Danish Financial Resolution Authority (Finansiel Stabilitet)

Professor at the Department of Finance, Steffen Andersen receives a Carlsberg infrastructure grant to study the ‘Mechanisms of Gender Disparity in Financial Choices’

Professor Michael Møller from the Department of Finance receives The Danish Finance Society’s honorary award 2016 for his extraordinary contribution to research, analysis and communication of complicated financial issues

The award committee emphasized Michael Møller’s extraordinary contribution to research, analysis and communication of financial issues as the background for their selection. Jesper Berg, Director General at the Danish FSA, presented the award, and he stressed Michael Møller’s exemplary abilities to communicate complicated financial issues, his appearance in both written and electronic media, and his wide choice of subjects.

The honorary award consists of a diploma and a unique glass ball created by glass artist Pia Rakel Sverrisdóttir.

You can find more information about the The Danish Finance Society honorary award 2016 here (in Danish). 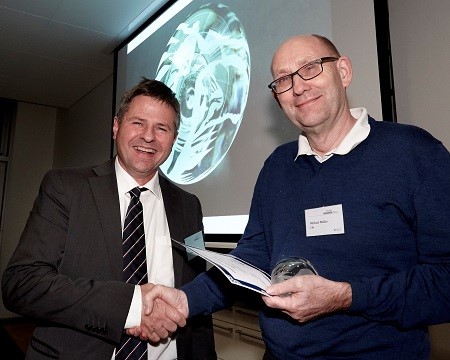