Every year, Dansk IT, which is organizing IT professionals in Denmark, is awarding its so-called award for the dedicated enthusiast to a member of Dansk IT, who has carried out an extraordinary and engaged effort to further the ideas behind Dansk IT. This year, the award goes to

Dansk IT's Price for the Dedicated Enthusiast 2014 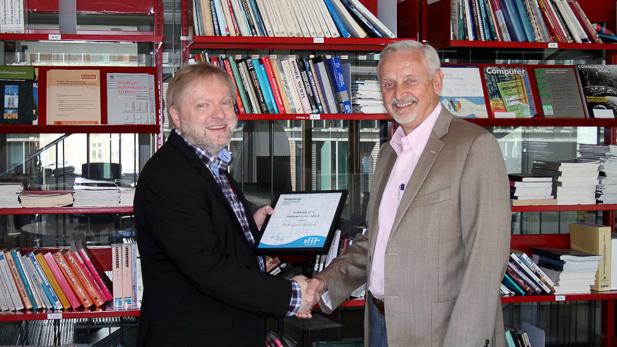 Per Andersen DIrector at Dansk IT on the left and Niels Bjørn-Andersen Professor, CBS at the right.
English (Slightly abridged version)

Niels will be known as a person, which for many years actively has supported Dansk IT, and he has contributed a large and altruistic effort to all of the core activities of Dansk IT:

- Professional networks and councils: For many years, he has been driving force behind Dansk IT’s council for Governance and Management. He has contributed to the widely used ‘IT Governance Recommendations’, which came first in 2006 and in a revised version in 2012. This report has been setting the standards for the use of IT governance in Denmark. In fact, Niels has participated in council work since the 1970’ies – this is something that very few people have on their CV.

- Dissemination: Niels Bjørn-Andersen has for many years been very active in the annual conference on IT-leadership, which over the years have had titles like ‘IT Challenges’ and ‘IT leadership’ and is now continued in the planned conference on ‘IT I praksis’ taking place 3rd September 2014. Through his large and very qualified network, Niels has been able to attract foreign and national experts as speakers at the conferences, and Niels knowledge has been vital for achieving the high professional level.

- Furthermore, Niels has been a member of the board of Dansk IT from 1998 – 2004, where he contributed to shaping Dansk IT.

- In summary, Niels has always been a valuable supporter of Dansk IT. This has been in the forms mentioned above, but he has also been one of our very good contacts, where we could always turn to help, good advice, contacts to CBS, or contacts to some of the many other professional bodies/networks that Niels over the years has been engaged in. We are very happy that Niels has had the time to engage so actively in Dansk IT over the many years.

We would like to congratulate Niels with the award, which comes with a diploma and a check. Niels sends his speech of appreciation here YouTube.