The Emergence of Governance and the Function of Law 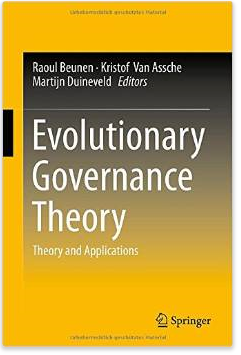 The Emergence of Governance and the Function of Law

This volume presents empirical studies and theoretical reflections on Evolutionary Governance Theory (EGT), its most important concepts and their interrelations. As a novel theory of governance, EGT understands governance as radically evolutionary, which implies that all elements of governance are subject to evolution, that these elements co-evolve and that many of them are the product of governance itself. Through this book we learn how communities understand themselves and their environment and why they create the complex structures and processes we analyze as governance paths. Authors from different disciplines develop the EGT framework further and apply it to a wide range of governance issues that cover topics such as welfare state governance, networks of power, governance of agricultural resources etc. The contributors also reflect on the possibilities and limitations of steering, intervention, management and development in a world continuously in flux. It bridges the gap between more fundamental and philosophical accounts of the social sciences and applied studies, offering theoretical advancement as well as practical recommendations.

Within the context of evolutionary governance theory (Van Assche et al. (Evolutionary governance theory: an introduction. Springer, 2014)), this contribution develops a particularly coevolutionary view of governance by understanding governance frameworks as forms of transfer. World society consists of multiple types of normative orders. It is within this structural setup that a governance phenomenon has emerged as the form through which expectations between different normative orders are stabilized. In addition, governance institutions serve as the central channels through which transfers between such orders are made possible. They structure the transposition of condensed social components such as economic products and capital, political decisions, legal judgments, scientific knowledge, and religious acts of salvation from one order to another, thereby allowing coevolution to unfold. In this context, law and legal instruments gain a central role since legal formalization is the central element that enables successful transfers to take place.