Do you want to become a part of an international research environment focusing on corporate governance? We are hiring a highly skilled student research assistant with sound methodological understanding and strong work ethic to work with data collection on Nordic firms.

We are sad to share the news that economist and presidential adviser Ed Lazear has passed away from pancreatic cancer Monday the 23th November 2020.

Words from Niels Westergård-Nielsen, who was a dear friend and colleague of Ed:
Ed was as many of you have said in your reactions to the sad news an unusual economist. We will miss him. We will miss his almost annual visits where he was able to make us all understand his pedagogical simplifications of a complicated economic problem. Though he claimed to be an empirical economist his main accomplishments were probably to make simple theoretical models of many issues in how to manage personnel in a wider sense. This came out of his original interest as a labour economist. But having a job at a business school (Booth School, University of Chicago) he early on convinced me and many others in the same situation that we could not teach business students about unemployment and policies to improve employment. He developed that idea into Personnel Economics. We are many who have benefitted from his text book and all of his articles and papers behind it. There are few economists, who have created their own JEL code, but Ed did.
His pedagogical skills were also used when he served as Chairman of Economic advisors in the White House under George W. Bush. He was there when the Great Recession developed, and I am convinced that he played a very important role in convincing the President how to deal with the crisis. After all, US came relatively fast out of the crisis and faster than Europe. The policies under Bush was to my knowledge taken over by the Obama administration in a smooth transistion.
We had the honour to host Ed at a conference just 3 weeks before Lehman Brothers went down. And this was typical for Ed and our relation with him. He came when we wished him to come over several times even when he was in the White House. As a member of the Cabinet his visits involved notifying the police, but with Ed’s typical modesty his role in the White House was not something, he was talking much about in public. Another visit was when he became honorary doctor at Aarhus School of Business. Later he got the same honour at CBS.
The great thing is that so many of us have met him and benefitted from his inspiring intellect. Together with his kindness, his elegant teaching and strong arguments in discussions he will hopefully inspire us for a long time to come.
It has been a privilege to have known Ed.
Niels 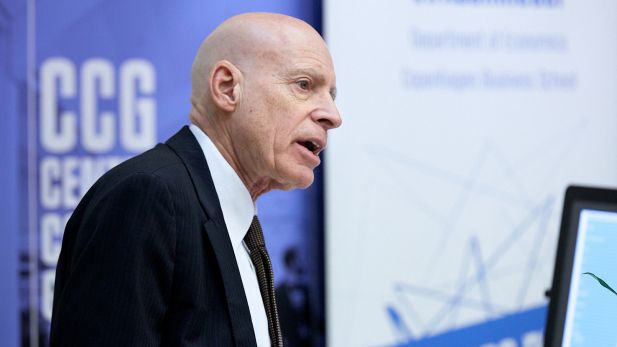