In the spring term, the CBS Library is running a series of weekly Zoom talks about the research process. The talks will be especially useful for students who are working on their year-end projects. You are free to attend as many or as few of the sessions as you like.

Work of art at CBS Library

What does 10 steel pipes have to do with the CBS identity? Find out and experience the library at Solbjerg Plads in a new way. 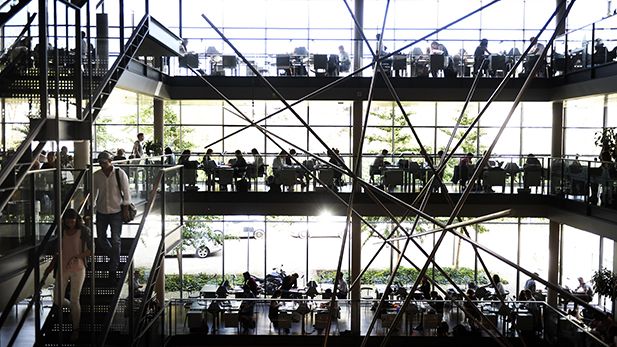 In the middle of CBS Library at Solbjerg Plads hangs a huge work of art. It is a stabile of steel pipes that many students have probably gazed at from the reading areas along the atrium.

The work was created by Steffen Jørgensen (1940-2015) in the early 00s. He was a painter and graphic artist, educated at The Royal Danish Academy of Art and Copenhagen University wherefrom he held a cand.scient in Mathematics, which characterized his art. Based on projective geometry, he worked with systems of points and lines, which he called Configurations.

The work "Desargues" is named after the French mathematician Girard Desargues (1591-1661). He was the first to describe the figure which the work forms in mathematical terms called the Desargues' theorem.

The figure shows how ten lines (steel pipes) intersect at ten points. On each line are three intersections, and through each intersection three lines.

The figure, hovering in the air like an oversized mikado game, was originally supposed to have been a mobile. With only one fixpoint in the ceiling, it would rotate, thus illustrating how the figure changes as it rotates.
Fearing that the ceiling could not support a one-point suspension, it was instead fixed in three points. That way the mobile became a stabile and you have to move around it to experience the effect of the rotation.

A symbol of CBS 'dynamic organization

The figure has formed the basis for the design of CBS 'current logo.

"The Desargues figure, with its many intersections, is a graphic picture of communication and cross-border networking. The stabile thus constitutes a metaphor for CBS as a network of lines of development and connections in many directions, but with as many anchors and points of contact as energies and ideas can cross without having to pass a common centre. In other words, the figure acts nobly as a distinctive symbol of a vibrant, visible and dynamic organization."

This was how Michael Cotta-Schönberg (former Director of CBS Library) described the stabile when CBS Library moved from Rosenørns Allé to Solbjerg Plads at the beginning of the century.

Maybe you'll have a different experience with the artwork next time you stop by to borrow a book or spend time studying.

Art is present all over CBS.
Read more about Art at CBS.