During the centennial, we look back at the 100 years that have passed since the foundation of CBS Library. We have reached the 1970s and the topics that occupied the library were self-governing teams, new targets and policies, growth and IT development.

library news about the 70s 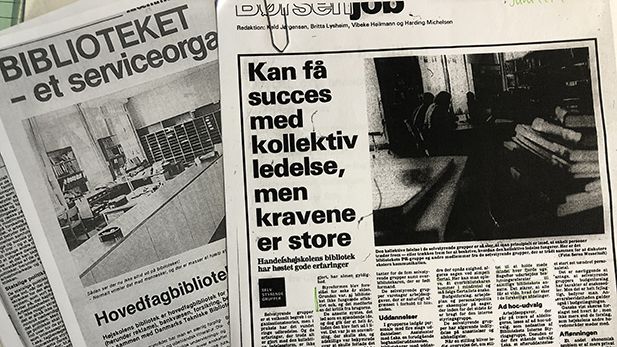 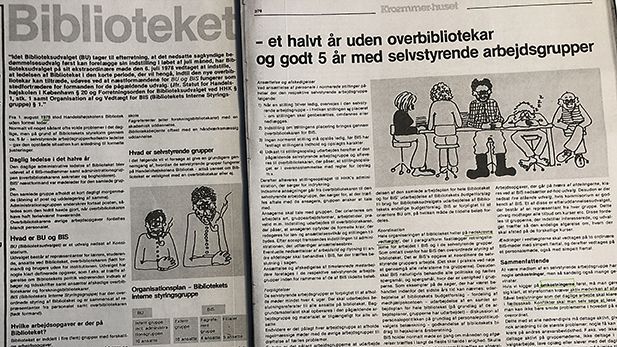 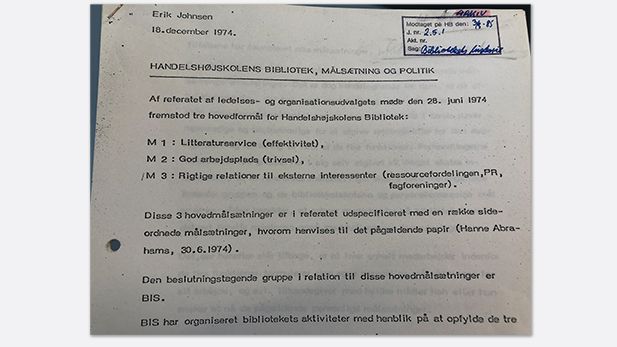 In the 1970s, house sharing, communal eating, and women's fight for equal rights are on the agenda. But the decade is also scarred by the economic crisis and increased unemployment. The year 1971 sees the introduction of the 13-point grading scale in higher education.

A new way of organising the library

At CBS, a new statute brings with it new management principles, collective management bodies, as well as employee influence in the governing bodies of the university. The Library Committee emerges alongside two book committees: The Economic Book Committee and The Linguistic Book Committee. They are both staffed with members of faculty functioning as advisers to the library "concerning the implementation of the most appropriate acquisition policy", as stated in the annual report.

In the 1970s, the library introduces a new organisational structure that comprises four self-governing teams and a target and policy paper. The paper is drafted by Erik Johnsen, a professor at CBS, and is based on interviews with employees. The library is growing and there is an increasing need for qualitative guidance. The paper discusses three general objectives:

The Library Steering Committee (BIS) is set up and organises employees and activities in a way that will allow them to meet the objectives. There are four departments:

Finn Hansson, former subject specialist, PhD. and associate professor in sociology, explains how Torben Agersnap, one of the big CBS profiles at the time, with the new statute as inspiration contributed to the organisational transformation of the library.

Staff members are very happy about the governance structure of the library, and the self-governing teams even get a mentioning in 1979 in the newspaper Børsen under the headline: "Collective management can be a success, but the demands are great: Evidence from the Business School library is positive". The disadvantages, but especially the advantages, are weighed up, and in Kræmmerhuset, the in-house CBS newspaper, library staff encourage other CBS colleagues to organise in a similar way.

Challenges include the demand for active participation of all staff members, the fact that resolving conflicts and problems reside with the employees themselves, and the risk that some staff members will prey on colleagues´ sense of responsibility by slacking off in their own duties and by not participating in meetings and presentations.

Perceived benefits include the opportunity to organise work and assume responsibility, deeper insight into the tasks and duties of colleagues, which increases flexibility at peak loads and ensures greater commitment to the execution of tasks. The self-governing teams hold sway until the mid-1980s.

In the first half of the 1970s, CBS Library employs 18-20 people whereas towards the end of the decade there are around 30 staff members. The book collection more than doubles, from 66.317 in 1968 to 140.934 in 1978. Per Boesen is still head librarian but is replaced in 1979 by Ole Harboe. Former staff that we have interviewed for this article, remember the 1970s with fondness as fun, exciting, and full of new initiatives.

In the 1960s and 1970s, the photocopier comes to prominence as a new medium. It is used extensively and meticulous accounts are kept of the number of copies made. Towards the end of the decade, FUHU donates a microfiche machine that allows users to read EC Parliament proceedings and EC foreign trade statistics as tiny images on small plastic cards.

Computerization flourishes and with the acquisition of a punch card-based catalogue system from the US defence force in the 1960s, CBS Library is at the forefront. Previously, index cards for filing cabinets were created in multiple copies for the retrieval of books.

Punch cards revolutionized this process, as you could now "punch" a card and then run the cards through a reader to print out lists in alphabetical order or by subject. Kim Tønnesen and Per Falk Petersen, former staff with the library, linger down memory lane as they explain how they "punched" the cards and once a quarter took them to the CBS EDB (IT) centre to get the punch cards read and the lists printed. In this way, they would get a general overview of items in the library collections.

Unfortunately, we have not held on to any of the old machines, but from the annual reports, we learn that the EDB centre operated an IBM 1131 CPU with 8K fast storage and 500K background storage - not much in comparison with today´s technology. In 1974, the library and the EDB centre formalized a collaboration around the running of library catalogues. 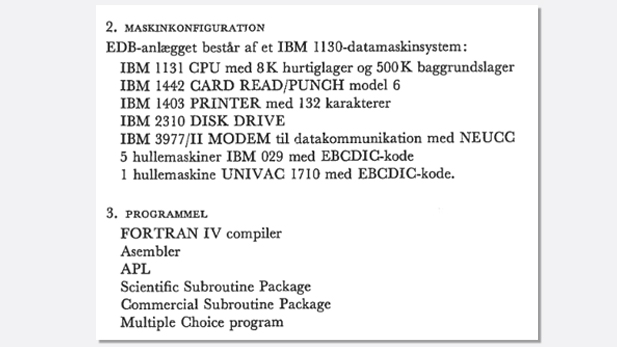 Clipping: List of old computer equipment at CBS in the 1970s

On IBM's website, you will find an archive of old IT technology, including a setup that looks almost like the punch-card reader and computer used at CBS.

Punch cards had been in use in various contexts since the 1950s, but as the potential of computing grew, their time eventually came to a close. In the ensuing decade, the focus on computerization increased rapidly.

Expansion of the library at Julius Thomsens Plads

Shortage of space at CBS is also an issue in the 1970s as the number of students and staff increase. In 1972, however, the library is granted a long-awaited expansion of the premises on Julius Thomsens Plads, making room for subject areas and administration on the fourth floor and expanding the lending and catalogue space on the fifth floor. The language library, which had moved to Howitzvej in the 1960s, must give way and move to a high-rise building on Fabrikvej 7. Today Fabrikvej has been renamed Stæhr Johansens Vej and the building is occupied by the Technical Education Copenhagen (TEC).

At the end of the 1960s, the library introduced a new job title, research librarian, which was bestowed on the team of subject specialists. One of them is Hanne Abrahams, who was recruited in 1970 from a position with the Department of Organization.

One of her achievements is the publication of a bibliography in collaboration with Torben Agersnap in connection with the 25th anniversary of IOA. She also contributes to the publication Aktuel Litteratur (Current Literature) which provides detailed subject lists of new literature. The lists were disseminated to departments and faculty, and they included titles such as Low-Cost Warehouses, Income Policy, and Offshore Oil Industry. They are still available from our archives. 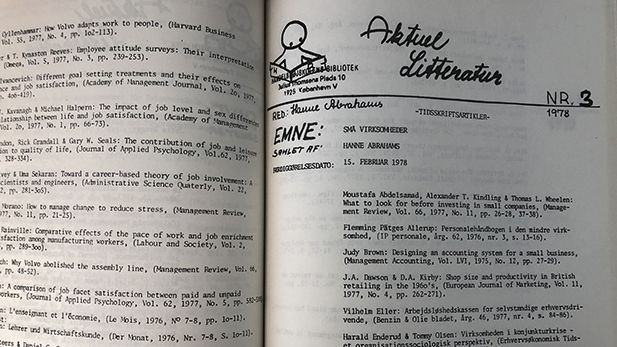 Excerpt from Aktuel Litteratur - a list of new literature on small businesses.

The following resources were used for this article:

Join our talks about CBS research