Literature about LGBTQIA+ and related topics

During the centennial, we look back at the 100 years that have passed since the foundation of CBS Library. We have reached the 1960s.

More staff and a new, but familiar, head librarian

The beginning of the 1960s sees a recruitment drive that gradually brings in more staff, including student assistants and library aspirants, and they are all now mentioned by name and role. Conferences, meetings and other events attended by library staff also get a mention

During this time, CBS Library engages in a whole suite of cross-border collaborations. Knud Larsen, the head librarian, is tasked by the library at the London School of Economics and Political Science with reviewing its collection of Scandinavian economics literature and making suggestions for new acquisitions. Librarian Per Boesen travels to Stockholm to see how the Stockholm Business School is organized. Perhaps he found more inspiration than anticipated, because in 1962, after 40 years of service, Knud Larsen resigns, and Per Boesen who has a long history at the library and also works as an associate professor succeeds him as head librarian.

Our first head librarian was a pioneer!

However, let us briefly turn our spotlight back to Knud Larsen and his enormous contributions to not only Copenhagen Business School Library but to librarianship everywhere, domestic as well as international.
On the occasion of Knud Larsen's retirement, Boesen explains how he (Knud Larsen) when he first started with CBS Library, to make ends meet, had to teach Danish also. He was very interested in mercantile science and helped build Copenhagen Business School.

In a modern higher education institution, a library is essential …

In higher education, a library is vital, and in the same way that Copenhagen Business School outgrew Købmandsskolen, CBS Library was destined to outgrow the Købmandsskole Library. This development occurred in 1922 under the leadership of Knud Larsen and it all started with thirty-odd books on mercantile science and economics. After this, Knud Larsen kept on creating new libraries: The Advertisement Library (launched in 1929 – and later merged with CBS Library), the Business School of Norway Library (1936), the UNESCO Library (1948), and he was an operative in multiple international projects. Knud Larsen ended his career as an associate professor at the Royal School of Library and Information Science, and as such helped build that too.

Open shelves and the advent of IT

In 1965, all books are placed on open shelves, which means that students are now free to pick up books themselves and browse shelves for interesting content. At the same time, the library introduces IT-based catalogues of books. As the reading room is now needed to house books, it is moved to a different location. Space is scarce as the advertising library is weaved into the collections.

As early as 1963/64, CBS Library is exploring ways to implement IT. The library collaborates with I/S Datacentralen on an IT project that is funded by the Ministry of Education and Research. The first step is to create an alphabetical-systematic catalogue with the help of IT. By 1964, the trials have advanced to such an extent that ”[…] a journal index based on IT will be released in the very near future”. In 1964, the library goes on to share its experiences with IT with the Association of Research and Specialized Libraries. CBS Library pioneered the IT venture in Denmark and was the first research library to import a punch card-based index system developed by the American military.  In close collaboration with DTB (now DTU Library) CBS Library paved the way for IT-based catalogues in Danish research libraries. Before we had relied on a card index, which served as an inventory, and in this index, people could look up relevant books that were organized by topic or author and were accompanied by information about location within the library.

In the spring of 1962, the library initiates the practice of creating weekly and alphabetically sorted lists of recent acquisitions, lists that are in turn made available to teaching staff for review. Unfortunately, none of these lists survives to this day, but in the annual reports, we can see what was published by CBS professors at the time and could be checked out from the library. Publications include:

The library provides departments with copies of indexes from more than 130 foreign-language journals – described as “Xerox-generated information” in the annual reports – which is bound to have been a very laborious task indeed. Today you can look up a journal and review the most recent contents in a split second. Go to Find Journals to get started.

As in previous decades, the collection continues to grow, and the library starts to include accession records, i.e. tables of new books and journals, in the annual reports. Previously this data was presented in prose, which made it much less clear. Below you will find a sample from the 1967/68 annual report: 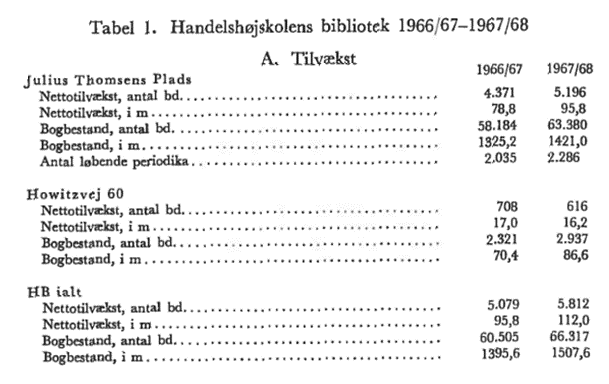 The Language Library in Howitzvej

Since 1940, Copenhagen Business School has operated a language laboratory as well as a linguistic index in one of the lecture halls. With the dismantling of the Ibero-American department, the reference library that has until this point resided there relocates to a reading room immediately adjacent to the Language Library, and so does the linguistic index. As mentioned in the article about the 1950s, this reading room is where the expansive French-Danish dictionary by Andreas Blinkenberg and Poul Høybye is born.

In 1965, the linguistic index, along with the language programmes, relocates to Howitzvej and is now known as the Language Library. Its collections are expanded and new acquisitions are planned to support the creation of advanced language programmes. New books are purchased at the behest of the head of departments and standing book committees for each language.

A 100-year-old legend and friend of the library

The head of the language department and the person responsible for new acquisitions for the Language Library from its inception was Jens Rasmussen. In 1965, he was made a professor of French and was later appointed as the first dean of the new Faculty of Business Language.

Many a student of French was taught either by Rasmussen himself or in accordance with his grammar of the French language (co-authored with Lilian Stage). Jens Rasmussen was a frequent user of the library and kept coming back for French journals for many years after his retirement. Even after the Language Library merged with the Economics Library and moved to Solbjerg Plads, and after himself being close to 100 years and hardly being able to walk, he would still turn up at the counter at Solbjerg Plads occasionally. In the movie marking the CBS centenary in 2017, you can listen to Jens Rasmussen talk about old times at CBS. 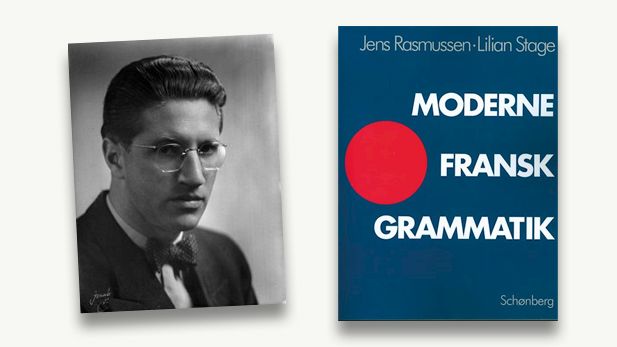 The following resources were used for this article:

Join our talks about CBS research