Remember that you can still follow CBS professor (with special responsibilities) Mikkel Flyverbom on tech in the Danish newspaper Politiken. The latest column with the headline 'One small jack for your smartphone, tablet and camera. But the tech companies are against it'.

Symposium: The work behind frictionless digital services in the public sector

The platform will host a research workshop on 4 October 2021 in collaboration with the artmuseum Kunsten in Ålborg on the theme of digitalization in the Danish public sector.

Taking the Floor: A talk with Daniel Beunza Associate Professor of Management at Cass Business School 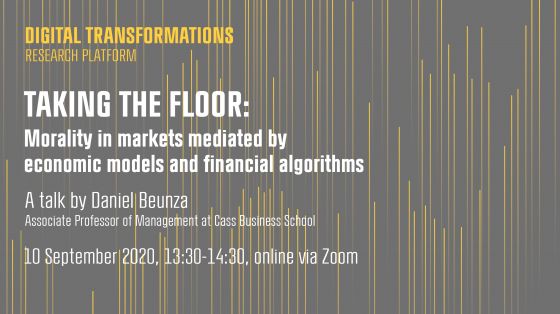 Taking the Floor: A talk with Daniel Beunza

Join us for a presentation of Daniel Beunza’s new book, which recently won the 2020 EGOS Book Award (sponsored by CBS) and the 2020 George Terry Book Award by the Academy of Management. The talk is organized by CBS BiS DIgital Transformations Platform.