3,215 new bachelor students are starting at CBS after the summer holidays. We are looking forward to welcoming the many new students to a reopened campus. This year, the study start will be different because of COVID-19 and the students will meet a semester that is unlike previous semesters.

Getting to the heart of entrepreneurship from all approaches

CBS’ first Business Connect event connected the more than 300 friends of CBS through a three-hour information and insight- packed event, focusing on just about all aspects pertaining to entrepreneurship – spanning from its DNA and nurture to growth prerequisites and Danish government policies. 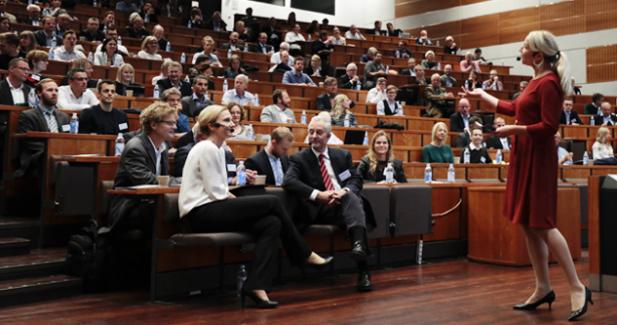 The subject on the day’s agenda was ‘Leading entrepreneurship’, striving to shed light on the subject from all relevant angles – political, research, organisational and practical.

Business Connect turned out to be three information-packed hours with a 360-degree barrage of insights and observations about the need and prerequisites for entrepreneurship and entrepreneurs in Denmark as well as the conditions influencing these.

Better public acceptance of success and wealth
CBS President Per Holten-Andersen laid the foundation with a presentation of CBS’ engagement in entrepreneurship and developing entrepreneurs, emphasising their importance to Denmark’s future. This was followed by three panel debates, respectively focusing on Danish entrepreneurship policies, research into entrepreneurs, and entrepreneur company growth, all moderated by journalist and TV2 News host Charlotte Vestergaard Beder.

Whether or not Denmark has entrepreneur-friendly policies led to statements such as; Lower taxes. Less and simpler regulation. Better public acceptance of success and wealth. Easier access to risk willing capital. More entrepreneurship in business education. Look to the United Kingdom and Sweden.

Hire people smarter than yourselves
How entrepreneurs and firms shape each other was subjected to scientific interpretation from research that practically went into the much sought-after entrepreneur DNA and then on to the nurture aspect of entrepreneurs, empirically describing which experience, employment, education and demographic factors have the highest probability of shaping entrepreneurs.

What it takes to bring entrepreneur companies from small startups to becoming substantial companies was also taken under treatment from different points of view; Professionalisation of the board of directors. The entrepreneur’s personal dedication, stubbornness, humility and willingness to hire people smarter than themselves. The need for a focused strategy, professional leadership and the right employees.

Wiser, more inspired, and better connected
The spread of both subject focus in the panel debates and in the points of view and expertise made the conference impossible to draw any single conclusion from, but the relevance and impact of the matters brought to light was clear to see. During the subsequent networking, spirited discussions and engaged conversations set CBS’ high-ceilinged foyer abuzz for well over the appointed hour.

- The goal was that we should all go a little wiser, a little more inspired, and better connected from the event. Judging by our feedback and the animated conversations after the event, people definitely connected and had been given something relevant to talk about. So I am very satisfied, says Director of CBS Business Louise Seest.

CBS Business Connect is not a standalone event, but one of a number of initiatives initiated by CBS to develop and expand our substantial business and society engagement through the last year. In the spring, CBS launched CBS Roundtable and held the first Alumni Day in ten years. Since the summer break, the first meeting in the new CBS Business Panel has been held, and CEO Thomas F. Borgen from Danske Bank has agreed to become CBS’ first Executive in Residence.