Congratulations to the 2015 Executive MBA graduates! 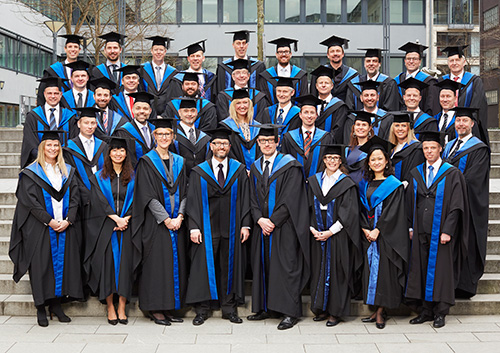 Congratulations to the 2015 Executive MBA graduates!

On Saturday 28 March, 39 senior executives celebrated that many months of hard work had finally earned them the triple-accredited Executive MBA degree from Copenhagen Business School. The newly baked E-MBAs came from both the Flexible E-MBA and the E-MBA programme and received their diplomas in a graduation ceremony attended by friends and family, culminating in the long-awaited hat-throwing moment.

Graduate Mads Mortensen from Analyse2 expressed his feelings on this much-anticipated day: "The CBS E-MBA has been such a rewarding journey with lots of challenges both personally and academically. I have sincerely enjoyed broadening my knowledge and extending my network. To maintain my connection to CBS, I was recently elected for the MBA Alumni Society Board. I look forward to further develop and engage with the large MBA alumni network.”

Joining our more than 1300 CBS MBA alumni, this will be the 21st class to graduate with an MBA from CBS. As they merge into one chapter, they will now be known as CBS MBA Chapter 21.

Teacher of the Year

As is tradition, students had gone through the difficult task of choosing their favourite professor encountered in the programme. Two all-time favourites and senior faculty were elected. In the Flexible E-MBA class, CBS professor Can Seng Ooi was chosen to receive the recognition. He felt honoured and humbled and congratulated the class. Showing his confidence in the graduates, he ended his speech with a simple advice: "Keep your feet on the ground as you reach the stars."
For the E-MBA class, CBS professor Thomas Plenborg, though absent at the ceremony, also thanked the class for his election: “I consider the opportunity to teach at the MBA programme as a true privilege as it gives me the chance to meet people who are demanding, curious, experienced and have a great appetite to learn.”

Student of the Year

For each class, fellow classmates had also elected a student they felt represented the values and spirit of the class. Dorthe Hardig Keilberg from the E-MBA class and Kasper Oktavio Schweitz from the Flexible E-MBA class proudly received their awards for Student of the Year presented by the Chairman of the CBS MBA Alumni Society Board, Charlotte Fly Andersen.
On behalf of the CBS E-MBA administration we would like to wish the graduates all the best for the road ahead and look forward to staying in touch with you!
The page was last edited by: Executive MBA // 06/13/2018