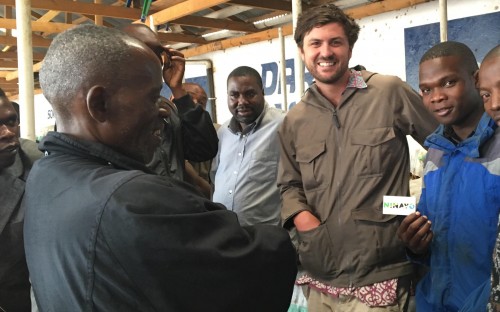 Jack Langworthy joined the one-year MBA program at Copenhagen Business School with no intention of starting his own business. Now, he’s co-founder and CEO of NINAYO, a crowd-sourced market intelligence platform with a multi-million-dollar valuation.

With NINAYO, Jack aims to revolutionize agriculture in Tanzania. In Tanzania, 80% of the workforce are independent farmers. But, historically, farmers and markets have been unable to communicate supply and demand effectively. 30% of food rots in Tanzania despite high demand.

Launched in 2015, NINAYO lets farmers and markets advertise to one another, drop a GPS pin in a map, and connect online; improving ease of commerce and creating new business opportunities.

NINAYO was one of six startups selected to go through Silicon Valley-based startup accelerator Expa Labs, where it received investment at a huge valuation and backing from Uber chairman and co-founder Garrett Camp. The mobile-friendly platform has over 7,500 active users. It’s even been endorsed in a speech by Barack Obama.

Jack chose Copenhagen over Ivy league business schools in the US for his MBA back in 2012 – and it was there that he gained the skills and the mindset to develop into a successful social entrepreneur.

The Copenhagen MBA has responsible management at its core, and the school’s Entrepreneurship Platform hosts regular events connecting aspiring MBA entrepreneurs with the local startup community in Denmark.

Crucially for Jack, it was the Copenhagen MBA’s Leadership Discovery Process – a unique personal development course which runs throughout the MBA program and touches on diverse topics like cognitive coaching, brain functions, and human understanding – that helped him become a better-rounded business leader.

After graduation, he had job offers from two leading Scandinavian firms: IKEA and Novo Nordisk. He made the MBA triple jump – changing role, industry, and location – and became a business analyst at IKEA’s Swedish HQ.

It was a great gig; Jack made regular presentations to IKEA’s senior leadership and CEO. But he still had an itch for international development work. In the Fall of 2014, he started developing NINAYO with an IKEA colleague in the evenings after work. In February 2016, he left to go full-time with his social enterprise.